The Inkbuator Email says that this collaboration is Laura’s debut, but our archives show one LAT and one Universal to her credit and I reviewed an Inkubator puzzle by Martina in 2021. In any case, it’s a good ‘un. I don’t often agree with the Inkubator difficulty ratings and indeed did not find this one moderately challenging. I enjoyed it anyway.

Each theme answer has letters in circles that unscramble to spell the same word.

See the anagram? If not, we have a revealer to help you out: 48a [Protector of the right to free expression and a literal hint to each group of circled letters] is the FIRST AMENDMENT. Each set of circled letters will spell FIRST when re-arranged and they’ve been “amended.” Fun! 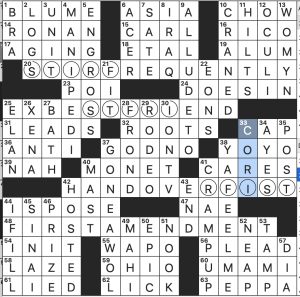 What I didn’t know before I did this puzzle: never heard of the drag queen MONET X Change. I have heard of ION TV and did not now they syndicate “NCIS.” And I am not familiar with Missouri rep CORI Bush. And no, not that kind of Bush. She’s from the other side of the aisle and a different gene pool. 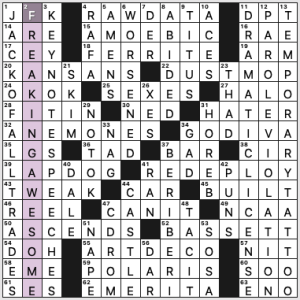 An easy Friday NYT (though it took me 50% longer than Weintraub’s Thursday New Yorker puzzle—the epitome of “easy themeless” these days is Thursday’s TNY) with the unusual choice of vertical triple stacks.

Can’t say I see AMOEBIC as [Amorphous, in a way], vs. modifying dysentery caused by amoebae. Didn’t know FERRITE ([Ceramic iron compound that’s nonconductive]). Can’t say I knew that POLARIS is a [Star that’s actually three stars]! Also had no idea that 56d. [Give: Sp.] is DAR, but I’ll bet at least a quarter of solvers know enough Spanish to get that.

A few clues that popped: 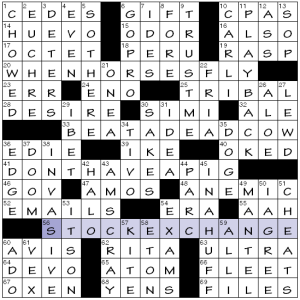 Switching up the endings of selected phrases.

While I can admire the tidiness of the theme I ALSO (16a) am not personally excited by the description of animals as [live]stock, nor of the the phrase(s) in 33-across. Sure, there are certain realities of practice and usage but I don’t have to like seeing them promoted. 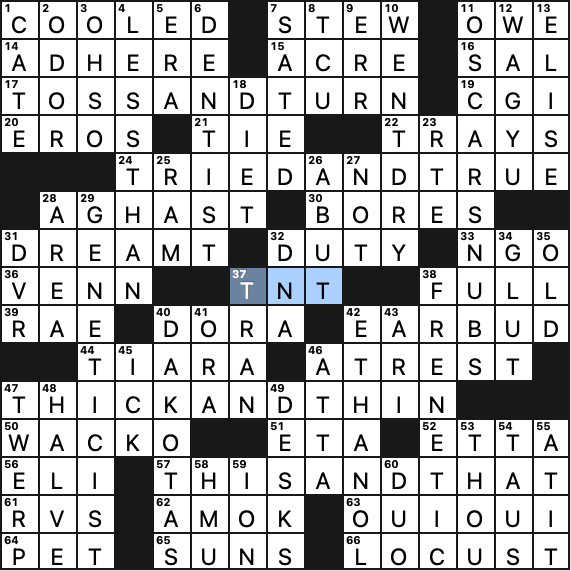 Solid theme, nicely executed. The phrases are firmly in the language and each one fell quickly given enough crossings.

The fill is full of goodies as well with OSCAR SNUBS, GENETICIST, FRENETIC, LESS THAN, DENTIST, ETHANOL, the DAKOTAS, and WENT DRY. I also liked WAGYU and WACKO, but had no clue about HMU [“My DMs are open”]. I’m guessing it’s short for Hit Me Up. (The internets confirm that is correct.)

Theme: The first letter in each answer spells out one of the keys in CTRL+ALT+DEL. 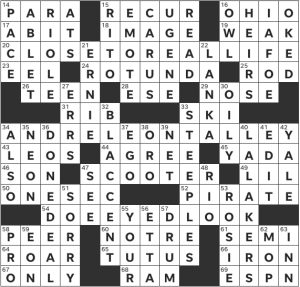 This theme was really straightforward. I caught ANDRÉ LEON TALLEY entirely on the crosses, not knowing that he was the first African American creative director and editor-at-large for Vogue. Similarly, I wasn’t sure about DOE-EYED LOOK until I had most of it filled in already. In fact, for the most part, I filled this puzzle based on its down answers, shifting over when I couldn’t remember PARA for 14a [“Prefix for ‘normal’ or ‘legal’”]. When I wasn’t sure about a Down, I’d switch back to the Across (and was delighted to fill in 16a [“State whose three largest cities all start with C”] OHIO this way.

It’s a horizontally symmetric grid, which I always think is really fun, especially with the double grid-spanning themers. 36d [“Finalized agreement”] DONE DEAL and 32d [“Something a white rapper might be criticized for using”] BLACCENT were great to fill in. I also really liked the pockets of six-, then three-, and finally four-letter Down answers going through the middle.

A few other Friday faves include:

That’s all from me! Have a great weekend! 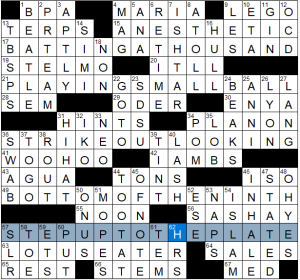 Themers in this wide grid are idioms drawn from baseball: BATTING A THOUSAND, PLAYING SMALL BALL, STRIKE OUT LOOKING, BOTTOM OF THE NINTH, STEP UP TO THE PLATE. Some are more common than others: I’ve never encountered STRIKE OUT LOOKING [36a Fail by not even trying] or PLAYING SMALL BALL [21a Favoring overly ambitious ventures in favor of incremental progress] in the senses as clued, though neither is uninferable from their usages within baseball.