Happy November! As we get closer to Thanksgiving, let’s certainly give thanks for today’s fun Sunday NYT puzzle, whose themers are quite enjoyable : 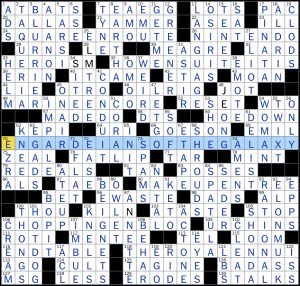 – 24A: SQUARE EN ROUTE [Why the party’s about to get less hip?] – Square (en) root
– 35A: HOW EN SUITE IT IS [Realtor’s exclamation about a primary bathroom?] – How (en) sweet it is
– 49A: MARINE ENCORE [How Shamu acknowledged the crowd’s appreciation?] – Marine (en) corp
– 70A: EN GARDE IANS OF THE GALAXY [“Prepare for a sword fight, McKellen, Fleming and all other namesakes out there!”?] – (En) Guardians of the Galaxy
– 90A: MAKEUP ENTREE [Dish cooked to smooth things over after a fight?] – Makeup (en) tray
– 106A: CHOPPING EN BLOC [What students in a karate class are often doing?] – Chopping (en) block
– 118A: THE ROYAL ENNUI [Challenge for a court jester?] – The royal (en) we

Each theme entry is a term or phrase where “en” has been included (and words re-spelled as need be) to lengthen those entries in new, fun ways. THE ROYAL ENNUI was easily my favorite, though a lot of these were really enjoyable transformations. One of my favorite types of themes, especially when done well as in this case!

Other random thoughts:
– 1A: AT BATS [Opportunities for singles] – I usually dislike baseball entries, but I will begrudgingly admit to enjoying this clue!
– 100A: THOU [The old you?] – Also cute!
– 93D: ELON MUSK [Business magnate who is a Stanford University dropout] – Ooooooooooof. Brutal inclusion here, given the timing of this puzzle. Also, the clue seems to imply that he is a (successful) “business magnate” even though he dropped out of Stanford… without mentioning his wild inheritance from his father? An unfortunate ding on an otherwise super fun puzzle! 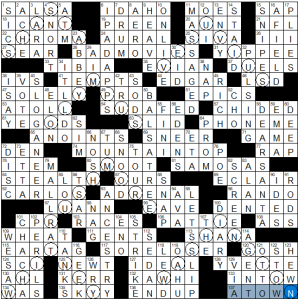 Evan brings us a somewhat nontraditional theme this week, as we’ve got six series of circled letters in the grid and only one long entry.

Starting with these circled strings, we’ve got SHASTA, VESUVIUS, OLYMPUS, RUSHMORE, WASHINGTON, and WHITNEY. Clearly the rising and falling pattern of each set is meant to be a mountain, and indeed our revealer at 74a [Peak, and a synonym of the word spelled out in the circled peaks’ highest points] MOUNTAINTOP both confirms that and points toward another Easter Egg: using the “peaks;” the S of SHASTA, U of VESUVIUS, etc, we can spell SUMMIT, a lovely additional layer that ties the theme together, particularly since there are few theme entries.

That’s not to say the theme isn’t constraining — by a very quick count, roughly 2/3 of the puzzle’s entries interact with a square that’s part of the theme. Much like last week, keeping the letters of VAMPIRE and WEEKEND in order in both readings, Evan manages to keep SUMMIT in order while plain just getting the grid filled.

Team Burnikel are showing off their ABs in today’s grid. Theme answers are familiar phrases (eight of ’em), each with an added AB. 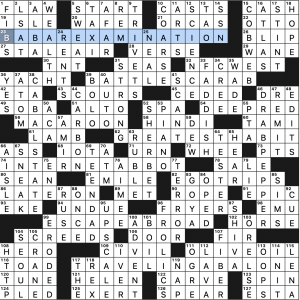 Solid enough, yeah? I picked some nits above, but mostly it was an enjoyable solve. I liked the first and last entries most.

Most of the grid real estate is used up with the theme, so there isn’t much in the way of sparkly long fill. We get EGO TRIPS, OLIVE OIL, and MACAROON but that’s about it. I’m accustomed to seeing plenty of fun colloquialisms in a Burnikel grid, so maybe a six-pack would’ve been sufficient for the theme and allowed more fun fill. Not sure I’ve ever seen the word FADDISH before [Like fidget spinners, back in 2017], and I don’t expect I ever would outside of a crossword. 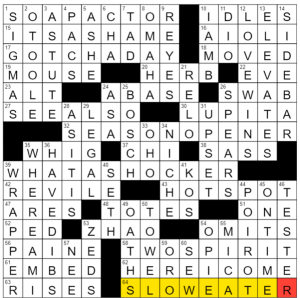 This puzzle is so fun! I am so glad to see TWOSPIRIT in a puzzle! GOTCHADAY is also wonderful. The grid and clues serve up great LGBTQ vibes 💖

EVE (22A [Titular spy show role for Sandra Oh]) comes from “Killing Eve,” a BBC show (now available on Hulu!) that is one of my favorites of the last few years. The two main characters, both bisexual women, develop a mutual obsession that unfolds over four seasons, interwoven with spy vs. spy shenanigans. Highly recommend!

HAVEDIBS (36D [Are able to get first choice]) is a little awkward of a phrase and results in a clue that is similarly a little awkward, but this was the only sticking point for me in this puzzle.

Theme: Each theme answer is a food that has a capital city in its name. 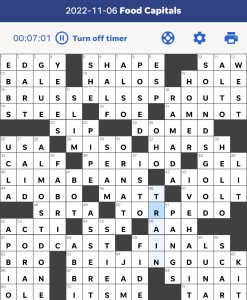 I’m a super food-oriented person so I was very pleased to see this theme. BRUSSELS SPROUTS was very fun. They are definitely mini cabbages. I needed the crossed to help with BEIJING DUCK, but LIMA BEANS fell smoothly into place.

I enjoyed SOUNDS GOOD going down, as well as the fun fact about RAMADA (that it’s the 8d [“Sister brand of Super 8”]), even as I started to fill in MOTEL 6. The bonus food items in 50a [“Long sandwich”] TORPEDO, 42a [“Garlicky sauce”] AIOLI, and 67a [“Pita or paratha”] BREAD were also pretty cool, especially given my love for sandwiches.