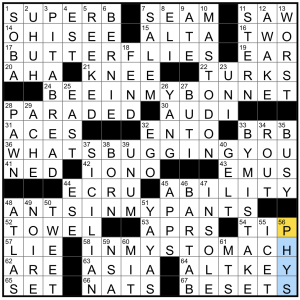 This is a top notch Monday theme, in my opinion. The revealer is what brings it up from just being a list of bug-related idioms. WHAT’S BUGGING YOU is a great (15 letter!) phrase that explains what connects the theme answers, while also adding in the “bug” wordplay. All the theme answers are well known but I had never thought to connect them this way, and so even though they were Monday-easy enough to put in quickly, I still got an “aha!” moment even as an experienced solver.

At first when I went through the puzzle, I missed the “With 58-Across” part of BUTTERFLIES IN MY STOMACH and thought, “huh, that’s slightly inelegant to only have half the phrase”. So I was thrilled when the second half showed up later in the puzzle! I don’t mine that the phrase needs to be split or that the two halves are far away from each other – they’re symmetric, the phrase breaks evenly, and it will possibly give newer solvers a foothold into the bottom half of the puzzle.

Given the 5 theme answers, the fill is quite high quality. The standout downs are PITA BREAD, MASTODON, BY MISTAKE, and SICILIAN. That last one took me a while since I recently ate Detroit-style pizza, which is also thick crust and square, so I kept trying to make that fit. The middle of the puzzle is a little weaker than the rest, with IONO, BUT I, ENTO, UNI, and UNUM all next to each other, but the crosses are fair.

Overall, a stellar NYT debut from Jill. Can’t wait to see more of her work soon.

Theme: RUNS IN CIRCLES (55a, [Wastes one’s efforts, and a hint to this puzzle’s theme]). The other theme answers are familiar phrases with synonyms for “runs” found in the circled letters. 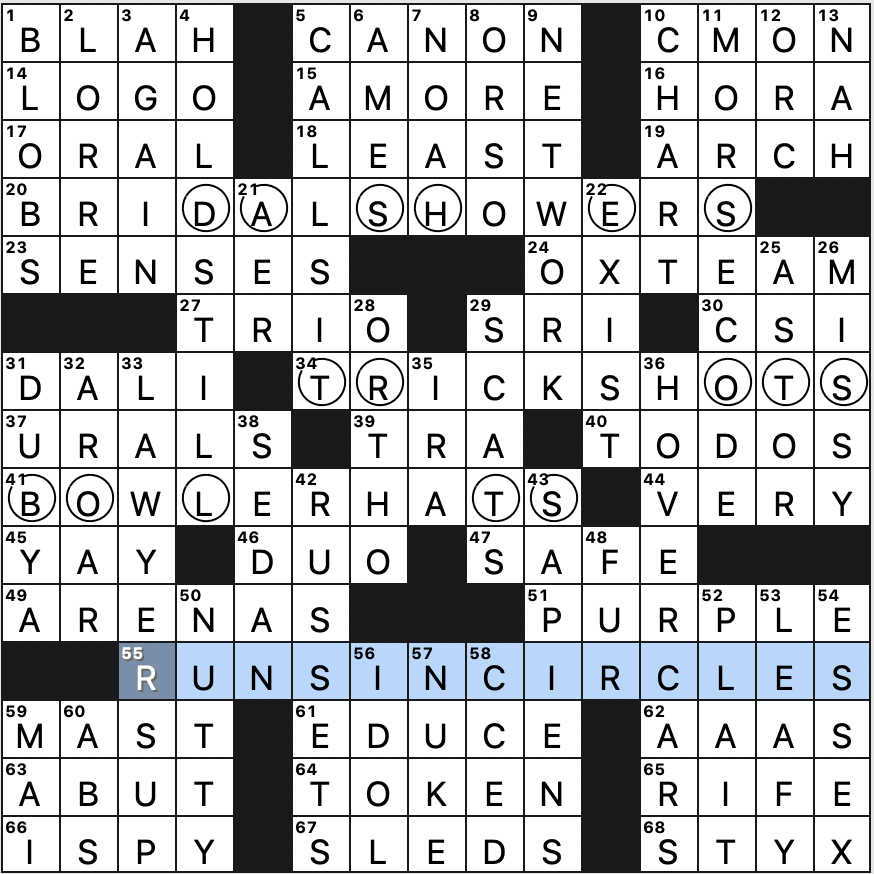 Just for kicks, I turned on the timer for this solve. I’m not as fast as others around here, but I do okay. Anyway, what that means is that I wasn’t really paying attention to the theme while solving. Afterwards, I sorted it out and liked what I saw. The revealer entry is fun, and the other theme entries are solidly in-the-language as well. Nice job.

I love the long fill as well today: “HOLD STILL,” LAWYERS UP, MORSE CODE, and HOVER CARS [Futuristic vehicles]. Man, they’ve been futuristic for 70 years now! When’s it gonna happen? Those and jetpacks. I mean, come on!

Lovely grid to get our Monday rolling. 3.75 stars. 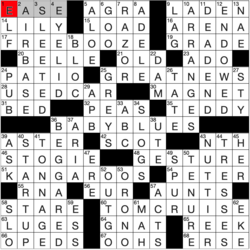 I often don’t notice a puzzle’s theme until after I’ve solved it. Here’s one where I REALLY had no idea what was going on, even after I had entered the revealer, OOHS, at 67A [Cries of delight, and what each of the answers to the starred clues literally are?]. As it turns out, the final syllable in each of the theme answers is pronounced such that it rhymes with OOHS, and the clues are written as “cries of delight”:

I hate to be this down on a theme, but boy, did those clues feel contrived to me. The theme entries themselves are lively and fun, but the shared final sound and the clues weren’t enough of a connection to feel like a theme to me.

The grid is pretty good — I could do without ERSE in the bottom right, but quite a few easy 7s make the grid as a whole very Monday-appropriate. 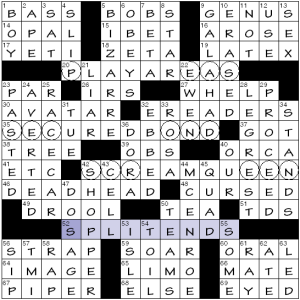 The title alludes to a different type of puzzle from crosswords, but it’s well-applied here.

That’s split peas, split second, and split screen. Very nicely done. Nice demonstration of how a theme doesn’t need to overdo it or be extensive to make for a satisfying crossword—just four total theme answers, and two are a mere 9 letters long. 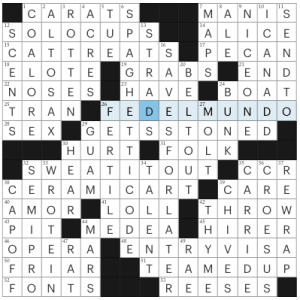 Southeast Asia is often overlooked in the US, with East Asians sort of being the default for “Asian” in some people’s minds. I appreciate that the last Paolo puzzle I did had leche FLAN clued as a Filipino dessert, and today I learn about a [Filipina doctor who invented a bamboo incubator to help families in areas without electricity], FE DEL MUNDO. I had not heard of Dr. del Mundo before; here’s her Wiki. She was still working as a pediatrician at age 99! I would welcome Filipino references in far more crosswords—representation matters. (My husband and son are Filipino. Also, UBE should become broadly familiar in the US because it’s delicious!)

Did not know: [Body parts where naths are worn], NOSES. Here’s an article about wrangling a nath on your wedding day. Also didn’t know [“Claws” actress Karrueche] TRAN; more Southeast Asia representation via this Vietnamese/Black actress.

4.25 stars from me. Appreciated learning a few new things, all with crossings that got me over the finish line. 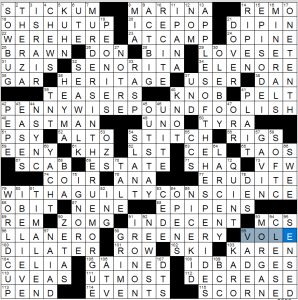 Hello! I could have sworn I wrote this up, but I can’t find it anywhere now that it’s tomorrow. BEQ posted an old grid from another of his outlets while he continues to troubleshoot hosting issues. It’s a 21x Themeless Challenger, available quarterly to higher-level supporters of the Patreon-based Hub Crosswords, formerly by BEQ and Cox/Rathvon (and formerly formerly known as “CRooked Crosswords,” and now BEQ and Joon Pahk. I *believe* the regular weekly subscription is delayed-by-a-few-weeks copies of puzzles that appear in the Boston Globe, but don’t quote me on that. Anyway, this is a big BEQ themeless from 2020 – you know what you’re getting. Two pairs of grid-spanners are the highlight; MURDERS IN THE RUE MORGUE, APPLES OF THE HESPERIDES, PENNY WISE POUND FOOLISH, and WITH A GUILTY CONSCIENCE. As we see more 21x themelesses, I’m learning what I do and don’t like, and that I definitely don’t need too many of them. This grid will satisfy me for a good while, and I hope that website issues are resolved without too much more stress for BEQ.
This entry was posted in Daily Puzzles and tagged Brendan Emmett Quigley, Jill Singer, Katie Hale, MaryEllen Uthlaut, Paolo Pasco, Wayne Harris. Bookmark the permalink.