Title: “No End in Sight” by Pete Muller
Prompt: The meta for this puzzle is hit song from the ’70s.
Answer: “So Far Away” by Carole King 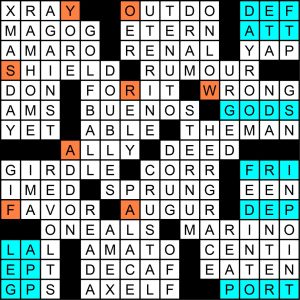 The streak continues! I think it’s at 26 Muller Metas now? I keep forgetting to check but it’s a monster streak for sure. Muller, your powers are useless against me!

Found the idea to this one right away. Pete had used a similar metanism two months ago so I was primed to spot it. I hate when solvers/reviewers mention that I’d used a similar mechanism before, but of course I leap at the opportunity to use it on Pete! It’s a dog-eat-dog world out there. What does that even mean? I don’t know.

Anyway, I saw quickly that the title “End” could be added to a number of entries in the grid to form words ending in -END (how meta is that) outside the grid. The unchallenging 3×3 squares in the California and Maine sections of the grid were the big tipoffs, since Pete really didn’t need to use ATT, DEF, ETA, LAL, and EPT in those corners unless something theme-y was happening.

Answer is: append “END” to eight entries ending at the right or bottom edge of the grid, forming a new word:

Next step: Find an entry whose clue would work for each of those nine:

Liked it a lot, as usual. Even past the decade mark Pete is not slowing down with these music metas! I hope they never stop. I’ll blog them as long as he writes them. 4.55 stars.