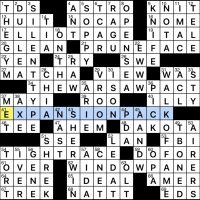 Hello everyone! It’s time to slow things down…or speed them up, if you prefer, by substituting letters in the word PACE. 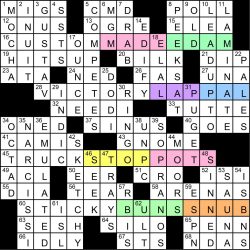 You literally had to look forwards and backwards to figure out today’s theme, as puns were created from common phrases by adding a word at the end of the phrase. It turns out that the final word of the originating phrase is spelled backwards in the added word AND forms an actual word as well that ends up making the pun-centered magic happen!

Liked the touch of having COMPETES intersect the “victory” part in the second theme entry (5D: [Vies]). Oh, and then there’s the intersection of ARENAS (58A: [Sports venues]) and ESPN, a very fitting meet-up if there ever was one in a grid (59D: [“Baseball Tonight” airer]). Of the stacked eights in the northeast and southwest, definitely was a fan of NARCISSI, even if I can’t get having to read Narcissus and Goldmund in my junior year of high school out of my head at the moment (35D: [Yellow flowers]). We’ll be seeing/worrying about many a POLL over the next 24 hours or so given Election Day is upon us. (8A: [Gallup survey]).

“Sports will make you smarter” moment of the day: PENN (65A: [Sean of “Mystic River”]) – Many sports fans are familiar with the 1979 NCAA Men’s Final Four, which featured Magic Johnson’s Michigan State team defeating Larry Bird’s Indiana State squad in the national championship game, still the highest-rated basketball game (any level) in the history of the Nielsen ratings. There were two other teams who competed in the Final Four. One of the teams was DePaul, led by future NBA All-Star and champion Mark Aguirre. The other was the last Ivy League team to reach the Final Four, the University of Pennsylvania. Penn made one of the most improbable Cinderella runs in NCAA Tournament as the East’s No. 9 seed (there were only 10 teams in each region), defeating Iona, top-seeded North Carolina, Syracuse and St. John’s to reach Salt Lake City. Penn would lose in the national semifinals to Michigan State before dropping an overtime thriller to DePaul in the third place (consolation) game.

Theme: Things you’re not supposed to talk about. The revealer is SAY NO MORE (65a, [“I got you, fam”]). Nudge nudge, wink wink. 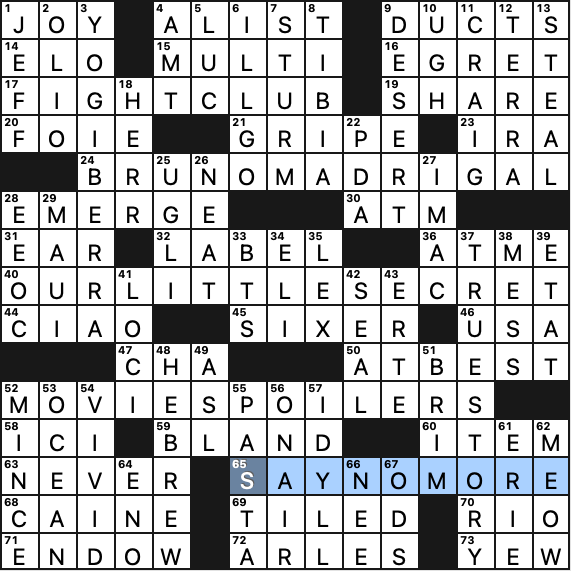 So yeah, the first two entries led me to believe we’d be looking for specific items from pop culture, so I had to get over that. But I did really enjoy the premise here, and lacking any other specific potential entries, the latter two do indeed work for me.

YOGI BERRA and “TRUE STORY!” are both fun long fill entries. At the other end we have some of the usual suspects appearing in today’s crosswordese catalog: ICI, ETAT, EEOC, ERTE, LOCI. But mostly the fill is solid and gettable.

Clue of note: 1d. [Amazon’s Bezos]. JEFF. The E is crossing ELO [“Don’t Bring Me Down” rockers]. This seemed like a good place for a JEFF Lynne clue.

And that’s all I have. Nice grid. I had to adjust my expectations a bit, mid-way through, but it’s all good. 3.5 stars. 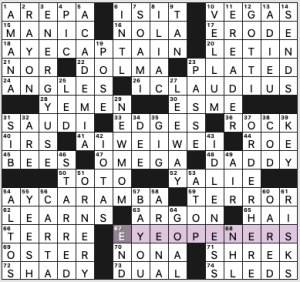 Solid, with lively choices for the themers and a nice revealer.

Fave stuff: ROCK clued as [One supplying strong emotional support, metaphorically]. Jordan Peele movies in the TERROR clue (I’m low-key afraid to watch Nope). ORDER HERE, I love takeout because I wouldn’t dare take off a mask and dine in. Been a while since I had AREPAs but I’ll get back there soon enough.

Hey! We’ve got ROCK crossing COD, and you know what that means: It’s time to reread Daniel Lavery’s “My Real-Time Response to Learning What the Rock Eats Every Day.” Spoiler alert: There will be cod. Ample amounts thereof. 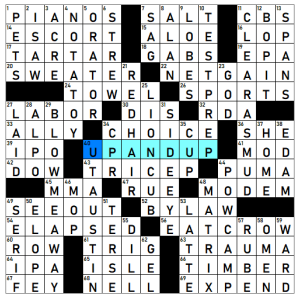 Theme: We have a smattering of clues marked with an asterisk in which the answer doesn’t match the clue — that is, until you read the word backwards and also append “UP” to it. Quite the trick! Let’s take a closer look:

Like me, you might have locked in a few of those starred clues on crosses before looking back and realizing the answers go in backwards(!) in the grid. This type of trickery caught me off guard at first, as it’s not the type of theme I’m used to seeing from Universal. It was one of those puzzles that caused some head scratching at first, but once I caught on it became easier to reverse engineer the answers. Kudos to the constructor for pairing these off symmetrically and smacking in a fun central reveal; and also ensuring the words made sense on their own in the “normal” direction. I’m choosing to interpret that reveal as a mathematical AND, i.e. plus sign, which seems to fit the theme better, as in UP + UP.

The long bonuses were exceptional in this puzzle, making up for the lack of length in the theme. I don’t think there’s a single long answer I don’t love here. NOT A TOY, TEST PREP, RED HAIR, SIDE EYE, UT AUSTIN, P.O.W. CAMP, BLOW ME AWAY, LION CUB, and EAT CROW are all great.

If I had to groan about anything in this puzzle it would be the clue at 30A [Prefix for “favor”]. DISfavor seems like a word that has fallen out of the lexicon. A clue such as [Prefix for “service”] would have landed better for me.

I’m writing this on Monday; it will appear on Tuesday, which is Election Day here in the US. It’s not hyperbole to say that the future of our democracy is at stake. This crossword gave me a brief and pleasant break from my obsessive worrying.

I thought we were looking at letter patterns in the theme answers. I was wrong. 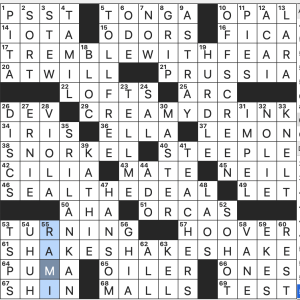 I couldn’t figure out why EA was a thing. Luckily there’s a revealer to reduce my confusion. 61a [Start of a KC and the Sunshine Band title, and 17-, 29-, and 46-Across] is SHAKE SHAKE SHAKE. Which is why we have CREAMY DRINK. It’s a very cute theme and I certainly have no better suggestion, so I’ll give it a pass on the awkward not-in-the-language theme answer.

What I didn’t know before I did this puzzle: that ERNIE lives at 123 Sesame Street.

And of course I leave you with part of the soundtrack of my youth. 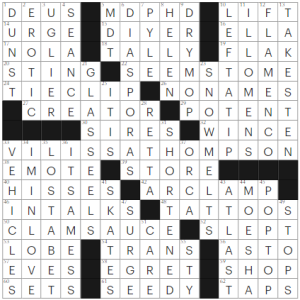 This week’s Tuesday crossword proved to be a stiffer challenge than previous offerings. I’d rank it as comparable to a Friday/Saturday NYT puzzle. Note also that Monday’s New Yorker crossword was also tougher than usual. Is it a trend or an aberration? Tune in next week!

The marquee entry is 33a [Founder of the disability-advocacy organization Ramp Your Voice!] VILISSA THOMPSON. I knew of her but had forgotten the name. Unrelated, I have a Latvian friend whose name is Vilis.

Editor:  Erik Agard
Theme: Each vertical theme answer has the string “DEB” in it, so the word “BED” looks like it’s going up. 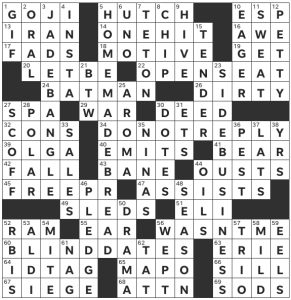 Solid puzzle this morning. Honestly, my biggest problem here is that the title phrase “Raised Bed” is kind of boring! Given that it’s the de facto revealer, it would be nice if it was something a solver would be excited to see in the grid itself. Even something like “Loft Bed” would feel a little more in the language.

Not only did I not figure out the theme until I was done solving, I didn’t even know if the theme answers were the across or down answers! I think that speaks volumes about the high quality of fill present today. JADE BANGLE and HOMEMADE BREAD are both great entries. I tried so hard to make “side hustle” fit where the answer was SIDE BUSINESS, so I’m still a little salty about that answer.

Favorite clues: 47a [Stat in which Natasha Cloud led the WNBA in 2022] for ASSISTS, 58d [Classification for cheese or salsa] for MILD.