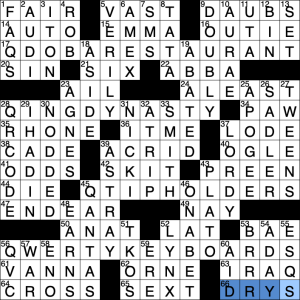 hello and welcome to episode #753 of matt gaffney’s weekly crossword contest, “Global Search”. i solved this week 1 puzzle without the instructions, and it was not very difficult. what are the theme answers?

anyway, all four of these begin with a Q not followed by U; the title suggests that we are perhaps looking for the name of a country, which is confirmed by the clue for 63a IRAQ: {The meta answer is NOT this country, look more closely (it’s not Mozambique either, come on!)}. so the answer must be QATAR, the host country of the men’s world cup, kicking off in under a fortnight. there’s a little nod to the tournament at 64a {It will set up many a goal-scoring header this month} CROSS, which … well, sure. i guess that’s not necessarily about the world cup, since professional players around the world are smack-dab in the middle of their club seasons (except in MLS, which just concluded its season). so players have been, and will continue to be, crossing and heading this month right up until the eve of the world cup anyway.

that’s all i’ve got for this week. if you haven’t voted today, please vote!