Happy weekend! Thanksgiving (in the US at least) isn’t too far off, and then we head into the home stretch for the calendar year. With all the food-filled celebrations to come, this Sunday’s puzzle serves as a perfect primer to mix up some tasty concoctions! 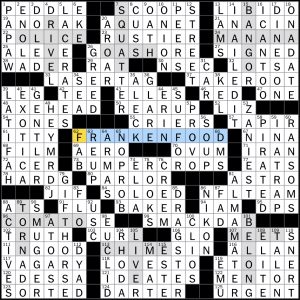 In each pair of crossing theme entries, the shaded squares can be read from (west to center to south) OR (from north to center to east), each path revealing a type of food. These food share a common letter in the middle, and are thus (as the title of this puzzle implies) courses (bits of food) that collide to form, in each pairing, a FRANKEN FOOD BUMPER CROP.

This was a fun theme for me, and I appreciated the added detail of pairing foods that I’d actually want to eat together! Each pairing of foods felt like the base of a delicious recipe, and I probably should have solved this after dinner so I wasn’t so hungry. That said, the rest of the solve sometimes felt a bit of a slog – since the grid was largely segmented into 10 regions, each region felt like its own mini puzzle with very few short entries with which to gain footholds. A few of those regions (especially in the bottom third of the puzzle) had a number of stodgier entries, which also made the puzzle a bit less joyful overall for me. YMMV.

Other random thoughts:
– 1A: PEDDLE [Sell, as bicycles?] – This was a cute way to start off the puzzle!
– 13A: LIBIDO [What might prompt a run for congress?] – I know what this clue is doing, but it still reads as creepy to me, especially given the number of politicians who end up in sex scandals.  This was more icky than cute for me.
– 43A ELLES and 74D ELLA felt like a dupe that could have been avoided?

That’s all for now. I hope you enjoy the rest of your weekend and have the chance to mix up some delicious food and flavor combinations of your own! Don’t forget to let us know in the comments what you enjoyed about the puzzle. 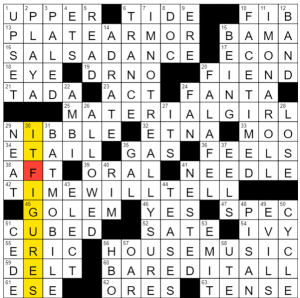 This one fell really fast for me (possibly a Universal themeless pr?). IMONAROLL (11D) clued as [Comment after successive successes] could easily describe our constructor today; Rafa seems to have had at least one print puzzle a week for the last six months or so. While this grid doesn’t excite me *personally* as much as some of his other recent themelesses,  it is clean and clued well, leading to an enjoyable solve. I first filled in 34A as EmAIL without looking at either clue, and at that point I had IM… phrases at 7D and 11D already; I was expecting some sort of mini theme to reveal itself at 30D. While that (obviously) didn’t happen, it does still feel like IMNOTREALLYSURE, IMONAROLL, and TIMEWILLTELL are telling a story.

Oh man, these Universal Jumbo Freestyles are good! I’m not going to say they keep getting better because they were lovely right from the get-go, but the quality level has not dipped at all. 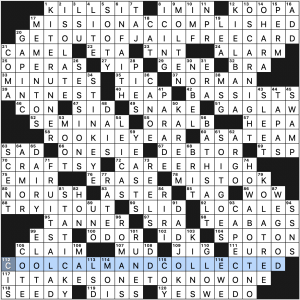 So many goodies in this one: MISSION ACCOMPLISHED, GET OUT OF JAIL FREE CARD, IT TAKES ONE TO KNOW ONE, ROOKIE YEAR, CAREER HIGH, “TRY IT OUT,” KIELBASA, OSCAR NIGHT, KITE RUNNER, STINK EYE, BATH SALT, “SO IT GOES,” “HOW ABOUT NO?,” STATICKY, DAD JOKE, CAPE COD, and FRUIT SALAD. I had to give COOL, CALM, AND COLLECTED the side-eye because I know it as, “Calm, cool, and collected.” But Internet dictionaries show both versions as valid.

I must admit I’m not familiar with the use of IN FAITH as a phrase meaning [Truthfully]. It feels quaint and dated. I also didn’t know ELOTE [Mexican street corn]. Here’s a recipe that doesn’t involve someone’s life story. 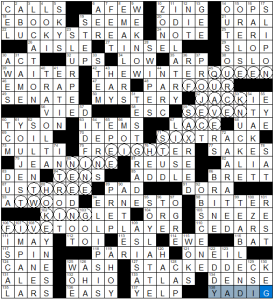 Lots of circles in this oversized (21×22) grid from Evan today. It’s pretty clear what’s going on, once we get to the relevant entries:

In addition to those thirteen entries, we’ve got a revealer at 127a [Metaphorical means of cheating at cards, illustrated in this puzzle] STACKED DECK, and in retrospect, an easter egg at 22a [Good run for a gambler] LUCKY STREAK, which most solvers will reach before the theme, and perhaps like me, not notice its relevancy until after. Or perhaps not.

I’m always impressed by stacked themers — Will Nediger and Ross Trudeau are two folks who I can think of doing it recently — of course I can’t find any of the three grids that I’m thinking of quickly right now, but I’ll ask them and may come back. While I’m plugging, I’ll also note that Ada Nicolle’s excellent (mostly-)themeless blog and patreon is named “lucky streak,” so she’s on my mind after this puzzle as well.

Back to the theme for a second, I particularly enjoyed the entries that didn’t use the card value in the same way — JACKIE, LACE, FREIGHTER, JEANNINE, ATWOOD, and perhaps KINGLET. I’m surprised it’s only half–it felt like more during the solve. I imagine it was prohibitive for Evan to find entries that worked while disguising every card, but it’s fun to dream. The theme set is also a bit sports-focused. I do well with this, and I know Evan is a sports-y person, but it’s something I noticed during the solve and that I know is a flashpoint for some. That said, the theme is relatively transparent to help with any obscure answers, sports or otherwise, and I think it was wise for Evan to spell out the five “tools” in FIVE TOOL PLAYER in the clue.

Theme: The first letters (the “starts”) of each word in the theme answers spell out ITS. 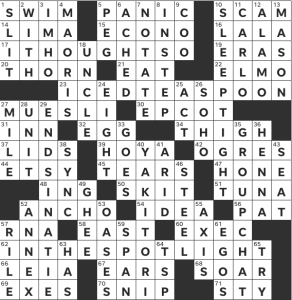 The theme here was really subtle, and it took me a bit to get it. Each is a very different answer, which provided a nice variety. I didn’t know that ICED TEA SPOONs were a thing, so I filled it in with some skepticism as the crosses came together.

I moved through this puzzle pretty smoothly, stopping at a few different. Initially, instead of ANCHO at 52a [“Mole pepper”], I had CHILE, but the crossing 38d [“In ___(attuned)”] SYNC and 29d [“Has no winner”] ENDS IN A TIE cleared that up right way. 10d [“‘Pleasant dreams!’”] SLEEP TIGHT and 35d [“Place to share memes”] GROUP CHAT were both really fun as well.

It’s more than a start, this puzzle is a great start (or really any time) to the day! 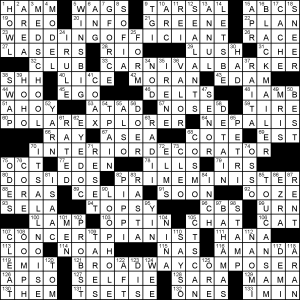 The magic happens in the clues in today’s puzzle by LA Times. There are seven theme entries that are just, broadly, jobs; all seven clues use idiomatic two-word idiomatic phrases the second word of which is a rough synonym for “occupation”. Is it just me or is it more typical to present the commonality in the answers? So: