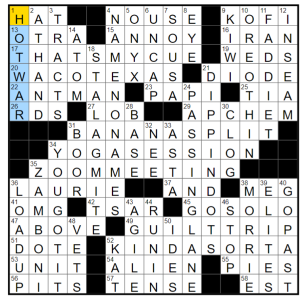 Amy said of last week’s Saturday, “The second straight Saturday NYT that felt like a Friday to me.” Well, add this one to that list. I expect we’ll see a lot of folks pr-ing this one. For me, it certainly played faster than an average Saturday. I ascribe this to the center stack of nice entries (and most entries throughout, really) being clued relatively straightforwardly and a lack of long proper names or foreign phrases more commonly found in Saturday grids. This feels like a Friday to me. (And yesterday’s was slower than an average Friday; I believe these two puzzles could have swapped.)

I really enjoyed and recommend Billy’s constructor notes with the tongue-in-cheek “How to make a crossword in three easy steps.”

If I have any nits to pick, it’s that the NYT interface continues to behave oddly. Does 1A highlight when 40D is selected for anyone else? Why?? 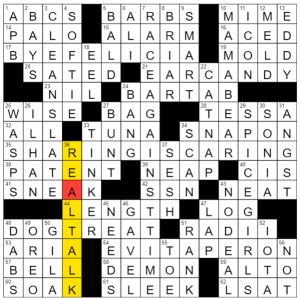 I really dig the intersecting (15)s of RACEAGAINSTTIME and SHARINGISCARING. A bunch of great ? clues throughout this solve that give fun but not tricky. Nice evocative cluing for ANGST (31D [Feeling that may inspire a teen’s poetry]), a new-to-me OREO fact (49D [Cookie invented in Chelsea, NYC]), and a little fun misdirection for ALARM (15A [It’s often set on Sunday night) combine to strike the just-right balance of smoothness and interesting that the Universal themeless is known for.

Someone asked me since last weekend what software I use to solve the Universal puzzles. This is the Crossword Nexus solver, and don’t forget you can get .puz files here. 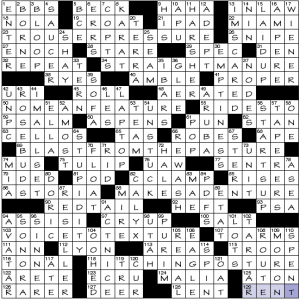 Reparse the title as ‘they end -URE’ and you see the gimmick. That trigram is suffixed to familiar phrases.

Here, I excavated a big ol’ slab of Eighties for you: 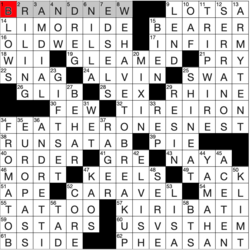 I was about halfway through this pretty tough puzzle before I flicked my eyes up at the byline, wondering who was challenging me like this. I shouldn’t have been surprised to see Rich Norris’s name there! Let’s start with the things I could do without: O-STARS (who remembers which letter goes with which type?!), MORT Drucker (feels a bit dated), and ONE’S in FEATHER ONE’S NEST. And now the highlights:

There were enough trivia softballs (MEL clued as [First name of two Spice Girls], ALVIN Ailey, a Winston Churchill reference for FEW, Gustav KLIMT) that these were my toeholds. 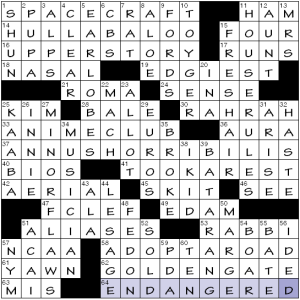 That’s all. On the less-challenging side as far as Stumpers go. Was able to put in a fair amount of answers throughout the grid on initial pass. 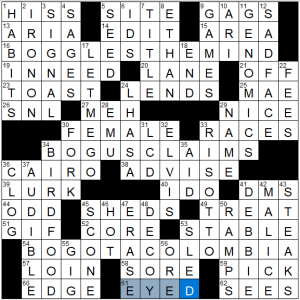 Our themers each start with the letters BOG-, but it took me a few seconds post-solve to connect it to the title: Three-Peat as in a “peat bog,” home of preserved iron age… stuff and tasty flavor notes for scotch. Not the most intricate theme, but it made me laugh when it connected, so I like it.

Not a whole lot jumped out to me on this quick solve — I’m indeed not sure if I’ve seen “The Future is FEMALE” anywhere other than t-shirts, and I’m a fan of Dr. ELVIS Francois, who had a Moment early in the COVID pandemic while he was working at the Mayo Clinic and has since appeared on The Masked Singer. Cheers!