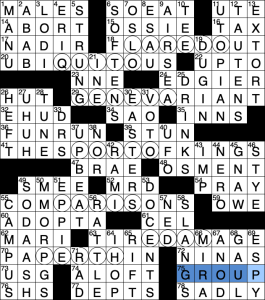 hello and welcome to episode #754 of matt gaffney’s weekly crossword contest, “Urban Planning”. i solved this week 2 puzzle without the instructions. i don’t normally do this in week 2, but for reasons i don’t fully understand, the email arrived this week with no instructions, so i just rolled with it. anyway, what are the the theme answers? in this slightly oversized (15×17) grid, seven long answers contain the name of a world city:

there’s one other theme answer, not obviously labeled as such but certainly noteworthy: {Any of eight at the World Cup, each of which includes four teams} GROUP. indeed, all seven of the cities in the theme answers are in countries participating in this year’s world cup: the USA is in group B, ecuador and the netherlands in group A, switzerland in group G (the group of death, with brazil, serbia, and cameroon), portugal in group H, and both france and australia in group D. taking the groups in order of the theme answers spells out BAGHDAD, another city. at this point i had to check the instructions to see if they were asking for a city or a country. it is indeed a city: more specifically, a city within 1,000 miles of Al Khor, Qatar, where the 2022 World Cup will begin on November 20th. so there’s another hint that the GROUP clue is relevant to the meta.

this is two consecutive world cup metas! are we going to have a whole month of world cup metas? i am here for soccer metas in general, though i have significant misgivings about this year’s men’s world cup. anyway, this is a nice one—the mechanism is entirely straightforward but still feels novel. i made it harder for myself by making a transcription error to get BADHDAD, not recognizing that as a possible meta answer, and then jumping through all sorts of hoops to see what else i could do with the groups, like indexing (so B would pick out the second letter of its theme answer, A would pick out the first, etc.) into either city name, country name, or full theme answer, blah blah. eventually i just checked my work and found the error and then i felt pretty dumb for not seeing BAGHDAD to begin with. there aren’t all that many seven-letter things you can spell with just the letters A-H, but that’s certainly one of them, maybe the best one. (FEEDBAG, BAGGAGE, DEFACED, CABBAGE, EGGHEAD, BEACHED, ACCEDED… that’s most of them.) it was a little surprising to have LAREDO, arguably not one of the 100 or so most famous american cities, in there with quite famous cities from other countries like PARIS and QUITO and GENEVA, but hey, we’ve all filled LAREDO into crosswords enough times.

bits from the fill: