Theme: ROUGH / AROUND THE / EDGES (31a, [With 38- and 49-Across, unrefined, and a hint to what can precede this puzzle’s border words]). Each of the ten words along the edge of the puzzle can be preceded by “rough” to make a stand-alone phrase. Those 10 words in clockwise order are: PATCH, COPY, SEAS, STUFF, WEATHER, RIDER, IDEA, SPOT, NECKS, PASSAGE. 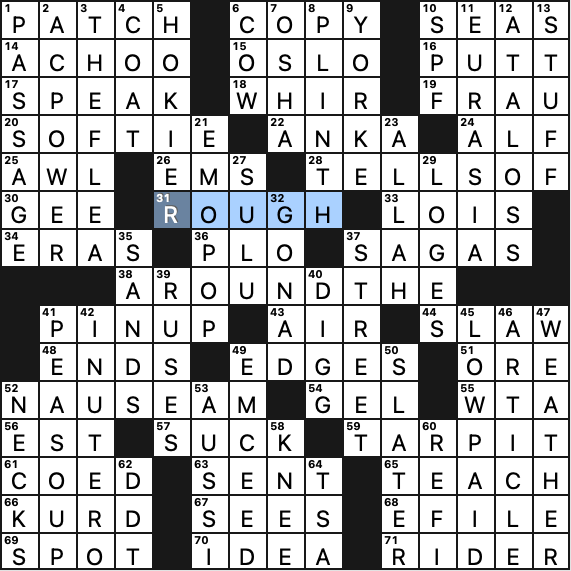 Nice. I would not have expected you could find 10 words to follow the word “rough,” let alone make them fit symmetrically, so I’m impressed. I enjoyed the title as well.

“Edge” themes like this, usually have 12 words, but in this case two of the words are seven letters long resulting in a couple corners on the larger side. Throw in the three-part revealer and you have a hard-to-fill grid with a lot of constraints.

Clue of note: 14a. [Cold burst]. ACHOO. This feels like it needs a question mark. 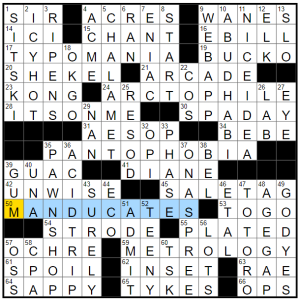 The asterisk on my solving time is because I used the NYT’s web solver and the cursor kept not doing what I expected, so I ended up typing things in the wrong squares. It slows ya down, I say!

Theme is uncommon words clued by what they mean, with a mention of what they don’t mean:

I’d like this theme a lot more if the words were all actually useful ones to know. Who’s gonna use a word other than chews or masticates, when people will understand what you’re saying with those but look at you blankly if you use manducates? I’d love to hear your suggestions of more familiar words that sound like they mean something entirely different.

Fave fill: PAWNSHOP, CHALAMET, ABU DHABI. Didn’t know the term SIT SKI, though I have seen that adaptive sports equipment (a single ski with a seat attached to it, enabling paraplegics and others to hit the slopes). My cousin’s son, who has cerebral palsy, has competed in sled hockey. I love that there’s so many more adaptive sports on offer these days! Unfave fill: Feel like it’s been a while since ENIAC and OSS reared their old heads. 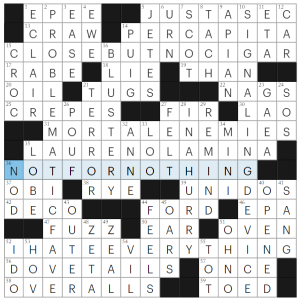 Lots to like in this 70-worder. Fave fill: CLOSE BUT NO CIGAR, MORTAL ENEMIES, the ECLAIR/CREPES snack, NOT FOR NOTHING, “I HATE EVERYTHING,” DOVETAILS, PROBLEMATIC FAVE, BLUSTERY (the gales of November came early), and a Jeopardy! SIGNALING DEVICE (do other game shows use this term?).

Did not know: 35a. [Protagonist of Octavia E. Butler’s Parable series], LAUREN OLAMINA. I don’t know that my local library carried her books during my sci-fi years in the late 1970s to early 1980s, when her books were pretty new. And I haven’t read a sci-fi novel in quite a few years now. I hear great things about Butler’s work, though! And N.K. Jemisin more recently. Also didn’t know poet ANNE Spencer who crosses LAUREN here, but LAUREL/ALNE sure looked unlikely. Every other LAUREN OLAMINA crossing was even more straightforward.

Lots of fresh and interesting clues throughout (but not super-tricky, this being an easier Wednesday puzzle that isn’t looking to stymie). And yes, I see FELT and FEELS, but don’t consider it a dupe since FELT is clued as the fabric whose etymology is unrelated to the verb. 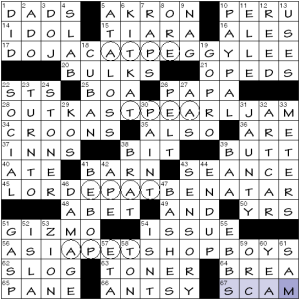 Don’t know if it was because I was distracted, but it took me a few beats to understand the theme. I’ve made it easier by circling the relevant squares in the grid.

In each instance, the mixed TAPE (a different permutation each time) straddles the two artists’ names.

You know what, it’s already the afternoon and I have a headache, so I’m going to bow out of the write-up prematurely. This is a good theme with a solid title, but to reiterate, it could have been better served by a slightly different revealer hint. 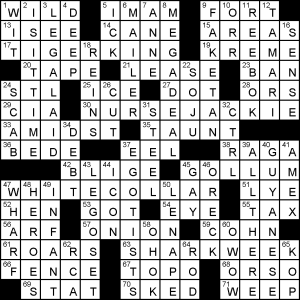 Chandi Deitmer’s puzzle theme riffs on [Annual Discovery Channel programming event that could feature the shows in the answers to the starred clues?], SHARKWEEK. Is this still actually a big deal? I’m so far removed from television these days I couldn’t honestly tell you. Thee puzzle has three answers whose first parts fit the blank “___ SHARK” for well-known types of shark. If it was just that, it’d be a fairly loosely defined theme, but all the answers are also TV shows, so it’s kind of two themes in one? Any good shows that begin with CARPET, WHALE or GOBLIN?

Super smooth solve for me and almost my fastest time yet! 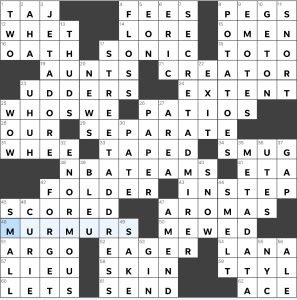 Theme: the word “date” is spelled in reverse in each themer in the downs, so they all go “up” (sneaky title hint!)

JETADORE might have been easier for solvers who knew even a little French but with themers in the downs, I had several crossings by the time I go to it. SECRETADMIRER had solid cluing though I thought of “Santa” and “shopper” first. STREETADDRESS is necessary for getting what you ordered and great had a clue! METADATA is crucial for many aspects of life but usually unknown or in unconsidered by most and any errors in it or if it’s lacking/missing cause issues (and the main part of my librarian job!). A fun bonus—the first and forth (two outer) themers while the second and third (two inner) have the same pattern for the theme. Impressive!

Also, h/t to Sally for her explanation of the theme, as I wasn’t seeing it today.

Stumpers: WHOSWE (cluing didn’t quite get me there so needed a couple crossings), JETADORE (needed crossings but they were almost all fair), and AUNTS (read the clue three times then it clicked)