This is a fun puzzle! Plus I learned something, which is always good. 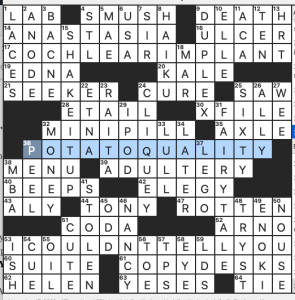 What I didn’t know before I did this puzzle: that ANASTASIA has a song called “A Rumor in St Petersburg.” I also did not know that POTATO QUALITY means “poor quality.” 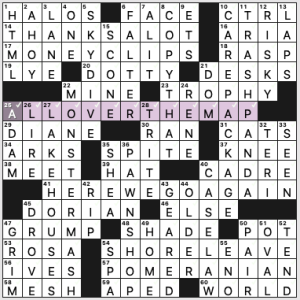 I always enjoy a Weintraub themeless! Not in a mood for enjoying anything at the moment, though, with a pesky headache, so I’ll be extra-brief.

Fave fill, much of it chatty: THANKS A LOT, ALL OVER THE MAP, HERE WE GO AGAIN, POMERANIAN, LAKE HOUSES clued as [Superior dwellings, say] (meaning Lake Superior—and we just marked the anniversary of the loss of the Edmund Fitzgerald), MONSTER MASH, SKYDIVE, COPY THAT, CARE PACKAGE, TRASH PANDA.

Theme: THE BIRDCAGE (64a, [1996 film in which Robin Williams plays a drag club owner, and a hint to this puzzle’s theme]). Types of birds are visually depicted with letters I pretending they’re bars of birdcages. 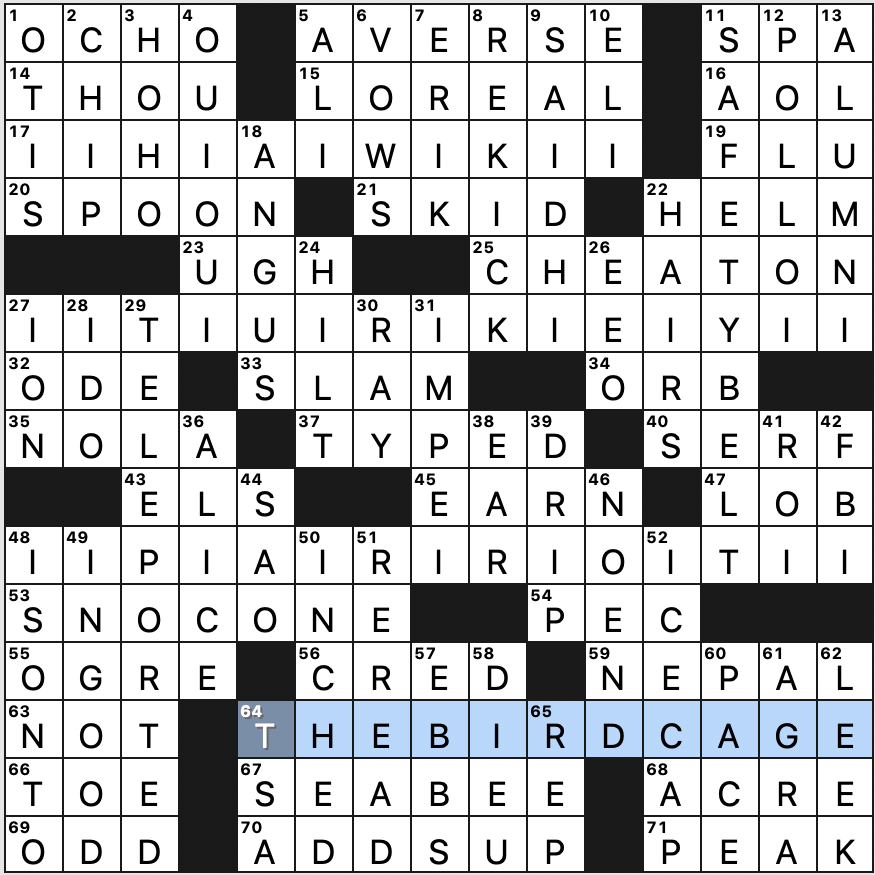 Phew. I definitely needed the revealer to make sense of this even though I got the pattern down by the third entry. But I was rewarded with a nice aha moment which I enjoyed. If I were to pick a nit, it would be that you’re unlikely to find a turkey in what we normally think of as a birdcage, but that really doesn’t bother me at all. (Although it would be neat if Tweety Bird could somehow be worked into the theme.) I’m all for something different when it comes to puzzle themes (every once in a while), and I like the creativity here. 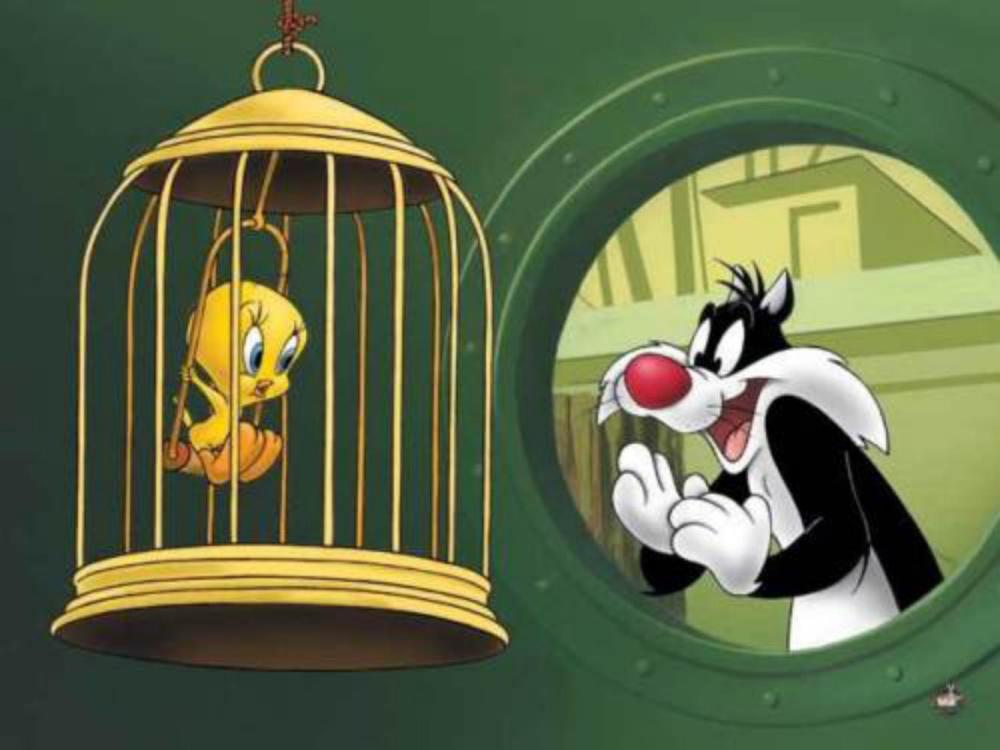 Top bits of fill include SAFETY BELT, TELEPORTED, SNO-CONE, and SEABEE. You know, I never knew why they’re called Seabees so I finally decided to look it up. As you might expect—since the military likes its initialisms—Seabees comes from “CB” which is short for “Construction Battalion.” And now you know…

All those I’s in the theme answers must have made filling this grid a challenge, especially where the I’s come at the beginnings or ends of entries. And so we get some weirdities like OUI OUI and IS ONTO, etc. But on the whole, given the sheer number of I’s in the grid, the fill is smooth enough. Old crossword standby I. M. PEI makes himself useful yet again with both I’s centrally placed in theme answers. Thanks for your contributions to crossworddom, my friend!

Theme: Each theme answer is clued as “Person doing some tagging,” and so the three answers together form a TAG TEAM. 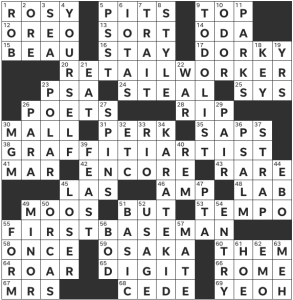 I wasn’t sure what to expect from this theme when I first opened the grid, but it quickly became clear and I started to think of all the folks who might tag things. It’s great that each “team member” tags differently, which just illustrates a precision in approach to the theme that works well with the device of using the same clue for each answer.

This was one of my quicker solves, finishing in under three and a half minutes. I loved how smooth it was. I filled most of it based off of the Down answers because I switched over early, and I think that the longer 4d [“‘Just be ___!’”] YOURSELF and 9d [“Where errands are checked off”] TO DO LIST offered a lot of structure moving through. Having GRAFFITI ARTIST as a 14, spanning almost the whole grid was a challenge only in that I couldn’t remember how many Fs were in it.

Overall, as a dork myself, I loved all the DORKY references in this grid and thought that the theme itself was very precise and varied. 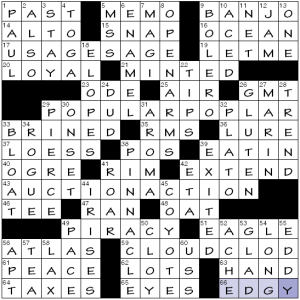 Today we have phrases composed of pairs of words that are the same save for an absent U.

This is one of those mildly inspired, treading-water type themes. Neither good nor bad, merely adequate. I spied an errant U at the crossing of 26d GLUTEN and 36a LURE; save for that one they appear only as one part of the theme answers. On the other hand, would eliminating all ‘extraneous’ Us be so significant? 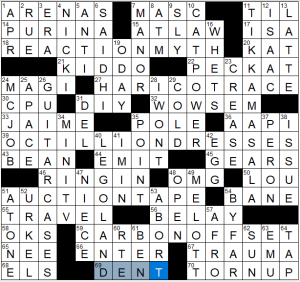