This is not my favorite Fireball. It wasn’t difficult, the theme is so straightforward that I wonder if I’m missing something (although I don’t think so) and there are some clunkers in the fill.

As you might guess from the title, all the theme answers have to do with pig products. 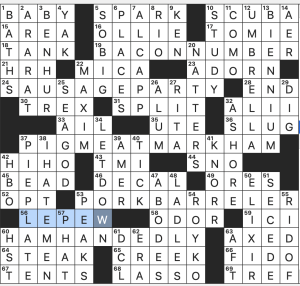 This looks like a collection of random things that have to do with pork products. Am I missing something? If not, then it’s not much fun as a theme and it’s even less so with the. tinge of racism in the center of the grid. And no, I am not being “oversensitive” or “woke” or whatever other snide thing you want to call it. I am speaking up as a White woman because I believe crosswords should be fun for everyone and because racism is wrong. It’s not complicated. I’d say the same thing even if this were a world-class puzzle; the fact that it’s mediocre makes it even more egregious. I’m quite sure that Peter did not sit down and say “hey, how can I make a racist puzzle today? Oh, I know!” I trust that it was inadvertent. Doesn’t change the impact.

What I didn’t know before I did this puzzle: that Andie McDowell’s character in “Groundhog Day” is named RITA.

Theme: The letter O replaces various toroidal objects in familiar phrases. The revealer is TORI SPELLING (51a, [Author of a bestselling 2008 autobiography, and a hint to some pictographs in this puzzle]) 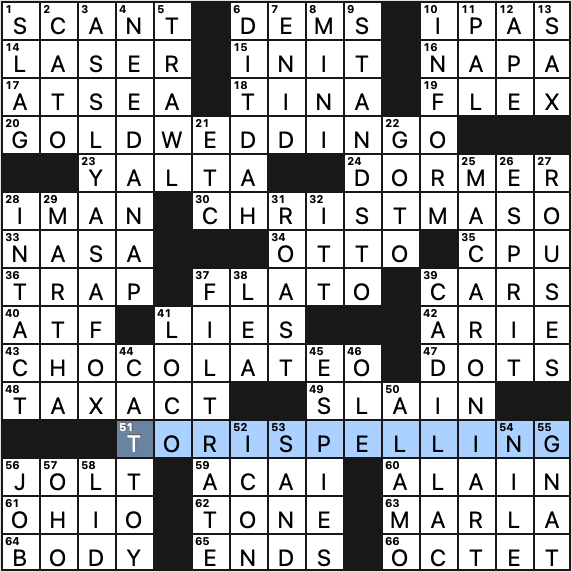 It took a couple different aha moments to figure out what was going on here, and I wasn’t sure I was on board at first. But in the end, I like the result. There are some nits I can pick (like the word GOLD is extraneous in the first entry and there are extra Os here and there), but the theme caused me to think differently when assessing each answer in a way I don’t recall seeing before. And at least the key Os are all at the ends of their respective phrases, so that helped with consistency.

I never had any interest in following TORI SPELLING and had no idea she had written a #1 bestselling autobiography, but she does have a rather serendipitous name. Kudos to our constructor for coming up with a way to employ it in a puzzle.

MACARONI ART and AS SLY AS A FOX are very nice anchors in the NW/SE corners. Also good: CADILLAC, NEED A NAP, and CAT TOY. Did not know racer ARIE Ludyendyk; I’m surprised we don’t see him more often. Also, can’t say I’m a big fan of spelling out Morse code letters as in DIT DAH. 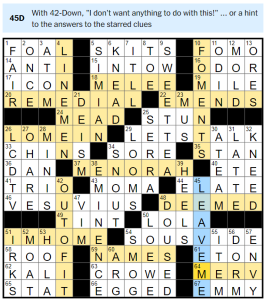 Today’s theme: LEAVE ME / OUT OF IT

Wow, that’s a lot of theme material.  75 characters worth, to be exact, which is a big number for a 15x puzzle (which usually clock in between 45-50 characters). The combination of being not quite awake yet and having to parse so many theme answers gave me a much slower than average time, although I don’t think the puzzle itself was too difficult (especially once you have the revealer).  Speaking of which, I wish the revealer had been worded slightly differently (i.e. “How to make sense of the starred clues”), but that’s just picking nits.

Cracking: LETS TALK — nothing good ever starts with LETS TALK.  If it’s neutral, you just start talking — how was your day, what’s the weather like outside, etc.  There’s no preamble.  If it’s positive, you enjoin the other party to talk (GUESS WHAT or GET A LOAD OF THIS).  For everything else, you need to warn the other party that a discussion is about to ensue.

Slacking: ARG — incidentally, this was also my reaction.

Sidetracking: VESUVIUS — Call me a Philistine for not realizing that particular song was called Funiculì funiculà, although I identified the tune immediately from the lyric.  Apropos of that, La donne e mobile:

Anna Gundlach’s USA Today Crossword, “On & on & On” — Emily’s write-up

A good challenge today, with a fun theme and lots of fresh fill. 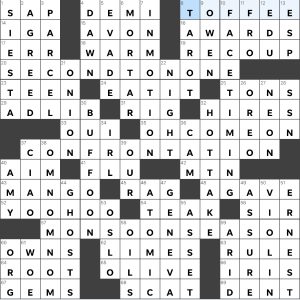 Theme: each themer contains three sets of …ON…

Given the title hint, I began filling in the first thermer with “o” to see if my hunch was right and found the three sets for the theme but needed a few other crossings to fully fill SECONDTONONE. CONFRONTATION also took me a few crossings, since I was wondering if it’s be a phrase like the first, though it is a perfect word as an example of this theme. The third themer, MONSOONSEASON, is also a phrase with the theme’s pattern.

Stumpers: IGA (new to me), EATIT (kept thinking “fell” or “plummet”), and AGREED (too many options came to mind so needed some crossings)

Other than the NE corner, I found the top half tricker than the bottom, which filled in for me right away. I enjoyed the theme and adored the fill overall. Fun though tougher solve for me today. How did you all do?

Amie Walker’s Universal crossword, “What About It?!” — Sophia’s write-up

Theme: Each theme answer is a phrase with IT in it, clued as though the phrase was missing the IT, making a new phrase. 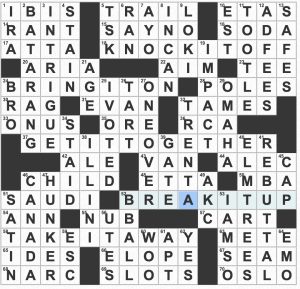 Fun things about this theme: the first theme phrase KNOCK IT OFF almost works as a revealer (I guess that would be more “knock it out” though…) and the revealer works as a theme answer since “take away” is totally a word/phrase. In general I like the theme and the phrases here; it’s interesting how much the IT changes some of their meanings.

The first theme answer I got was BRING IT ON, but not knowing the theme I had it as “bring upon” since that’s what the clue was for. I then dropped in “get together” off of the G, but realized it was too short by two letters and took it out. It wasn’t until I reached KNOCK IT OFF that I fully was able to see what was going on and fix my mistakes.

I loved some of the clues today: my favorites were the Julia CHILD quote, Alex Trebek reference for CANADA, and the Fresh Prince theme song clue for BBALL. Is TOOTLE really a word people use to mean “play the flute”? It sounds so undignified. Also, the clue on 3d [Palace ___ (prestige TV fodder)]  for INTRIGUE is especially timely given the new season of The Crown, which I’m currently halfway through. 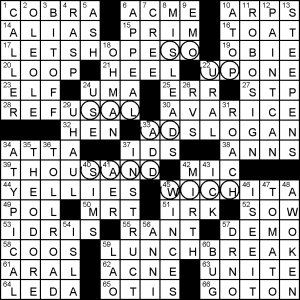 The theme of today’s puzzle by Michael Schlossberg eschews theme entries for the most part. The revealer is [Midday hiatus illustrated three times in this puzzle], LUNCHBREAK. Three generic lunches; SOUP, SALAD and SANDWICH; are split at a diagonal black square between two rows. To make it more visible, circles are employed.

I spent most of the time being stuck in the area with [Flour used for naan and paratha], ATTA; [Furry toy spiders that move when screamed at], YELLIES, which I’ve never heard of. Between those and not getting the specific [“Sister Carrie” novelist Dreiser], THEODORE and struggling with the consonant pattern of [Out of the ordinary], ATYPICAL; it was something of a perfect storm.

Brendan Emmett Quigley’s Crossword #1523, “Is This At The Music Festival? Or the World Cup?” – Darby’s write-up

Theme: Each theme answer essentially compares phrases from the World Cup to what they could mean at a music festival. 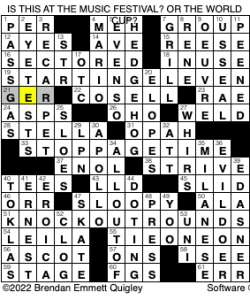 St. Louis’s professional soccer team is really ramping up ahead of next season, and so it’s only compounded the fervor around the World Cup in this city, so I get BEQ’s hype, even if I know very little about soccer myself. This puzzle will definitely be helpful as I try to tune into some of the World Cup! Needless to say, then, I filled most of these on the crosses, which felt particularly difficult down in KNOCKOUT ROUNDS, with three proper nouns crossing the first three letters: TOKLAS, ERNEST, and EROICA. However, the context provided in the clues themselves always provided a helpful tip.

I liked so much in this puzzle, and I really did love learning about the World Cup by filling it in. I moved section by section after I did my initial once over. In the top section, I laughed at the silliness of 1d [“Pollute the air”] PASS GAS and loved both the videogame references in 4d [“He gets big eating mushrooms”] MARIO and 6d [“Sonic, famously”] HEDGEHOG. I really wanted RUG to be in 3d [“Change the runner, e.g.”] RECARPET, catching on immediately to the wordplay there, but not enough initially.

In addition to soccer, we got a few other sports references. 7d [“Tailgating need”] GRILL, 8d [“Court legend Lacoste”] RENE, and 32d [“Stat for Josh Allen: Abbr.”] ATT. I also immediately think about Ohio State whenever I see 47a [“‘Hang On___’ (the McCoys hit)”] SLOOPY, but I’m not sure how universal of a thing that is (let me know in the comments!).

That’s all from me! Enjoy the World Cup if you’re watching it!