Posted on November 20, 2022 by Conrad
Grid: 25 minutes; meta: solved it while completing the grid

This week we’re looking for a type of footrace. There were four long theme entries: 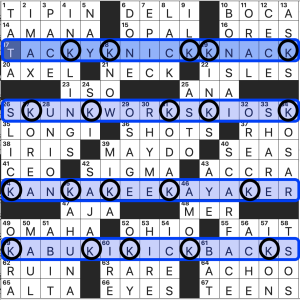 Each theme entry had five K’s, leading to our contest solution Five K. Well, that’s what I submitted. I hesitated a bit due to the extra K in LACK/NECK. There were 21 K’s in the grid, and a half marathon is also known as a 21K race. I think five K races are more commonly known, and adding an extra K from a non-themer seems off. But: you could make an argument for 21 K, and I wouldn’t be surprised if they accept either answer. Solvers: please let me know what you think. Were you on team 5K or 21K?

I’m doubling down on team 5K, and thought I’d share a song by Pizzicato Five. If you were a fan of 90s alternative rock back in the day you may remember Twiggy Twiggy. I planned to share that song, but heard イッツ・ア・ビューティフル・デイfor the first time today and I loved it. Another “aha” moment for me.