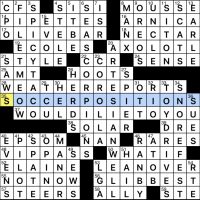 Hello lovelies! Matt has graced us with a themeless this week, so let’s go through some of the more notable entries. For starters, lots of TV references: 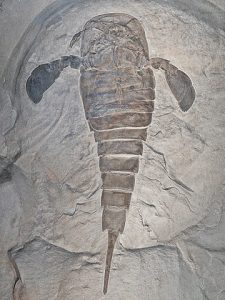 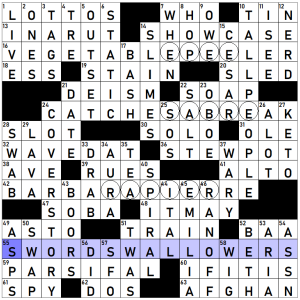 Theme: As indicated by the brilliant reveal at 55A [Daring performers with blades … or the starred clues’ answers?], we have a puzzle full of SWORD SWALLOWERS. Let’s take a closer look:

Interesting that 2 of these are defined by the Olympics as fencing blades (épée and sabre), while the third (rapier) is hidden inside of an Olympic athlete. The other fencing blade used in modern-day competition is called a foil. The rapier, by all accounts, was the original fencing sword that kickstarted the movement of “civilian fencing” in the early 17th century. I suspect rapier was chosen here because it made the theme set more elegant by allowing all three entries to span across word breaks. I needed a lot of crosses to figure out Barbara Pierre, who in 2013 was the 4th fastest 100m sprinter in the world with a time of 10.85 seconds (blazing fast!). I could have watched that race 36.6 times during my solve.

In the grid, TALL PEOPLE makes a near green-painty appearance, not helped by an awkwardly written clue – [Research shows they earn notably more per above-average inch] – I keep re-reading this clue, trying to figure out what the “average inch” earns in the first place. I have no idea. Somebody please explain. I enjoyed the parallel entry, COVER STORY, along with a lot of the mid-length stuff like SHOWCASE, STEW POT, SLIMES, STATIC (esp. with its engineering-related clue, [unmoving]), and EMILIA Clarke. I’m not an opera guy, so PARSIFAL didn’t do anything for me.

Clues I loved: [“Should I know that name?”] for WHO, [“AVE Maria”] opposed to a “St. crosser” type clue, and [Clean, as a deck] for SWAB. With [Person you shouldn’t recognize?] for SPY, the clue doesn’t seem misleading enough to warrant the “?”.

This was a fun puzzle overall. It flowed well and featured a sparkling reveal that perfectly captured the theme. 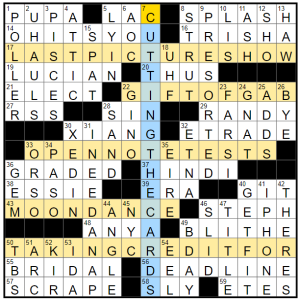 The theme anchor is CUTTING THE CARDS, [Part of a blackjack dealer’s ritual … or what this answer is doing vis-à-vis the answers to the starred clues]. Those long answers are highlighted: LAST PICTURE SHOW (marked by a dreaded with “The” clue), GIFT OF GAB, OPEN-NOTE TESTS, Van Morrison’s “MOONDANCE,” and TAKING CREDIT FOR. Credit card, dance card, notecard, gift card, sure. Not exactly sure what a picture card is, though.

Calling a foul on 1d. They’re pollsters, not POLLERs!

3.5 stars from me. Mostly solid, Tuesday-range fill, though I suspect many newer solvers will be in the same boat as me, needing the crossings to piece together XIANG.

Theme: GROWTH AREA (62a, [Prime sector for development, and a clue to the ends of 18-, 24-, 40- and 50-Across]). The other theme answers are familiar phrases whose final words can also be areas of land where one might grow crops. 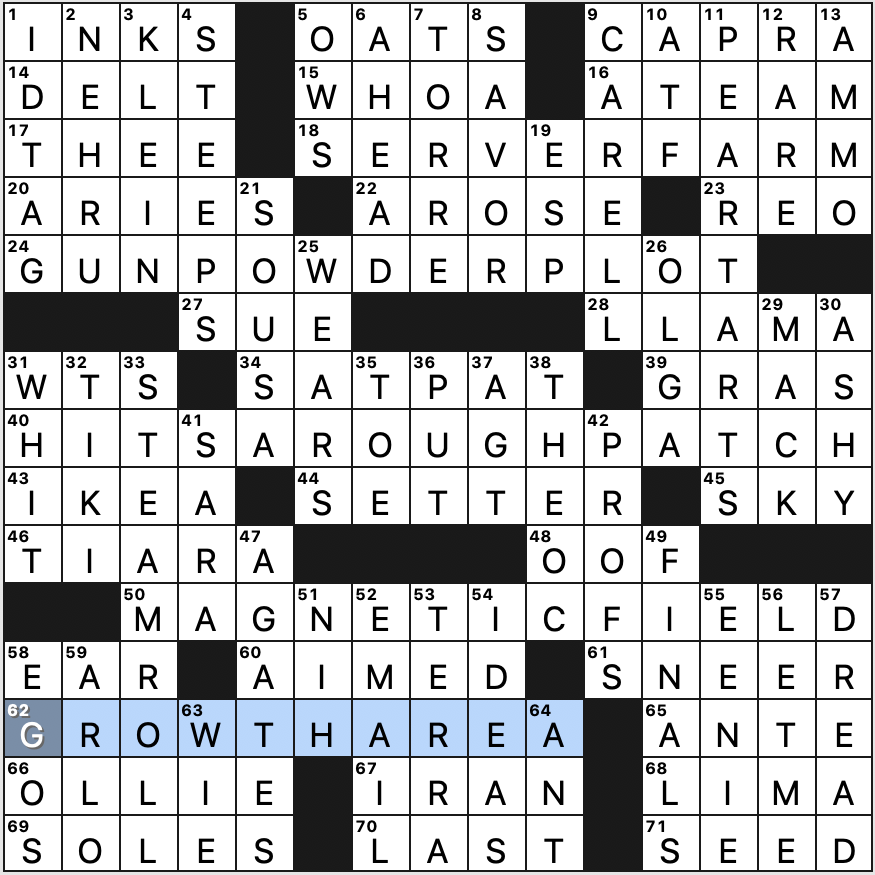 Nice theme. Each word changes meaning just enough, and all the entries are well-known and evocative. Expertly constructed.

PEAR TARTS and STEAMROLL top the fill. Actually, that’s about it for actual sparkle; the rest is mostly standard stuff. It did feel like there were more abbreviations than usual (WTS, AGT, NIH, ATF, and…OWS). 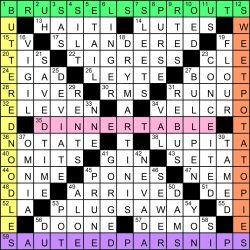 Good day, everybody! I hope you all are well as holiday season really kicks into gear. If you will be traveling over the next 48 hours or so, I am hoping you all get to your destinations safely.

So if this puzzle doesn’t get you ready for Thanksgiving, nothing will. We buck serious rules and standards of crossword construction to create some juicy sides on all sides of the grid. Four 15-letter entries make up the perimeter of the grid, and all are sides that might end up featuring in Thanksgiving celebrations in different parts of the country and world. Smack dab in the middle is where those meals are going to feature at, the DINNER TABLE (35A: [Gathering place on Thanksgiving Day…and a setting for the “four” side dishes at this puzzle’s perimeter]).

Just in case you need some strong liquids to down while having all that dinner, we have both GIN (41A: [“Bathtub” booze]) and DRY MARTINI in the middle of the grid (18D: [Cocktails ordered for James Bond]). The unorthodox design of the grid resulted in a good number of long entries in the grid outside of the theme entries, and almost all of them stood out in a great way. Only real slow down came when I put in “plows away” for PLUGS AWAY, and I know everyone is plugging away now in making sure all Thanksgiving plans go off without a hitch (53A: [Keeps working (at)]). I won’t judge any of you if you GORGED at the dinner table on Thursday and going into the weekend, as, as long as my mom insists on cooking Thanksgiving dinner — even though we keep telling her that we can handle the cooking duties now — I’ll keep stuffing my face (41D: [Overate, and then some]).

“Sports will make you smarter” moment of the day: RIVER (28A: [Amazon or Aare, e.g.]) – As a small part of the great start the Miami Dolphins have had this season, wide receiver River Cracraft has definitely made the most of his very few opportunities he has had on the field so far. In his fourth NFL season, and on his third NFL team, Crafraft has caught two passes on the season, and both came for touchdowns. Before his NFL career, Cracraft had a standout career at Washington State University from 2013-2016, as he finished second in school history in catches (218) and sixth in school history in both receiving yards (2,701) and touchdowns (20).

Good morning! Writing this on Tuesday because Monday got away from me so it will be quick. I didn’t figure the theme out until I got to the revealer, which is properly situated at the bottom of the puzzle. When I tagged the constructors I realized we didn’t have a tag for Susy which suggests this is her debut, at least for Fiend-reviewed puzzles. A good start! Hope to see more from her. 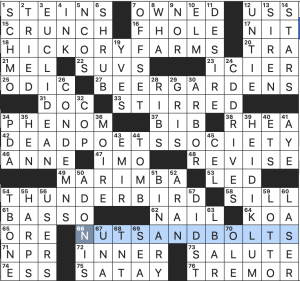 And the revealer: 66a [Essentials, or what the first words to the answers of the starred clues are] is NUTS AND BOLTS. HICKORY and BEER NUTS. DEAD and THUNDER BOLTS. I like the way the theme answers are paired in regions of the puzzle and it was a fun aha! moment. Nice Tuesday theme.

What I didn’t know before I did this puzzle: that KOA has its headquarters in Billings, Montana. 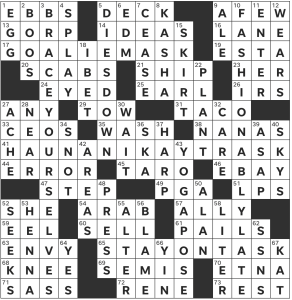 Looks like the USA Today is finally back up and running! Glad to see the tech issues have been fixed, at least for the most part.

Today’s puzzle is a solid USA Today style theme, with a good title and some fun theme answers. It’s one of the days when it seems almost like the theme was created to get some answers in the grid rather than the other way around, but I’m certainly not mad about that! HAUNANI-KAY TRASK is new to me, even though “From a Native Daughter” came out in 1993.

Other thoughts on this puzzle: 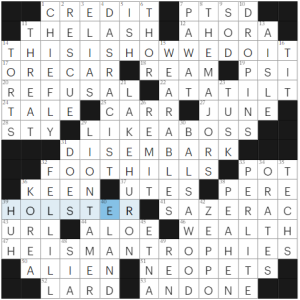 A lot going on here today, so please accept my apologies for the hasty write-up. Also, I did not mean to highlight 39-across HOLSTER in the solution grid.

I don’t know if it was the distractions going on here (medical emergency with neighbor, who lives alone) or something else, but my solving experience seemed more difficult than yesterday’s New Yorker themeless.

One of the issues I needed to resolve was in the upper right corner. 7a [Affliction that may be treated with psychedelic therapy, briefly] PTSD, but I had ADHD here. That in turn led to 9d [Do some lawn work] coming out as HOE rather than SOD.

Another minor trouble spot: left-hand side: 24a [Account] TALE, for which I had TAKE, which had me considering 1d [Above all] as <something> SKY in lieu of CHIEFLY.

A pair of grid-spanning entries: one easily gettable and the other unknown to me. You can decide which is which. 14a [Montell Jordan hit with the line “To all my neighbors, you got much flavor”] THIS IS HOW WE DO IT. 47a [Awards for Bo Jackson and Lamar Jackson] HEISMAN TROPHIES.

Good workout, or at least it seemed that way to me.