Theme: In honor of Thanksgiving, we’re given familiar phrases with the letters Y-A-M spreading out as we proceed down the grid. 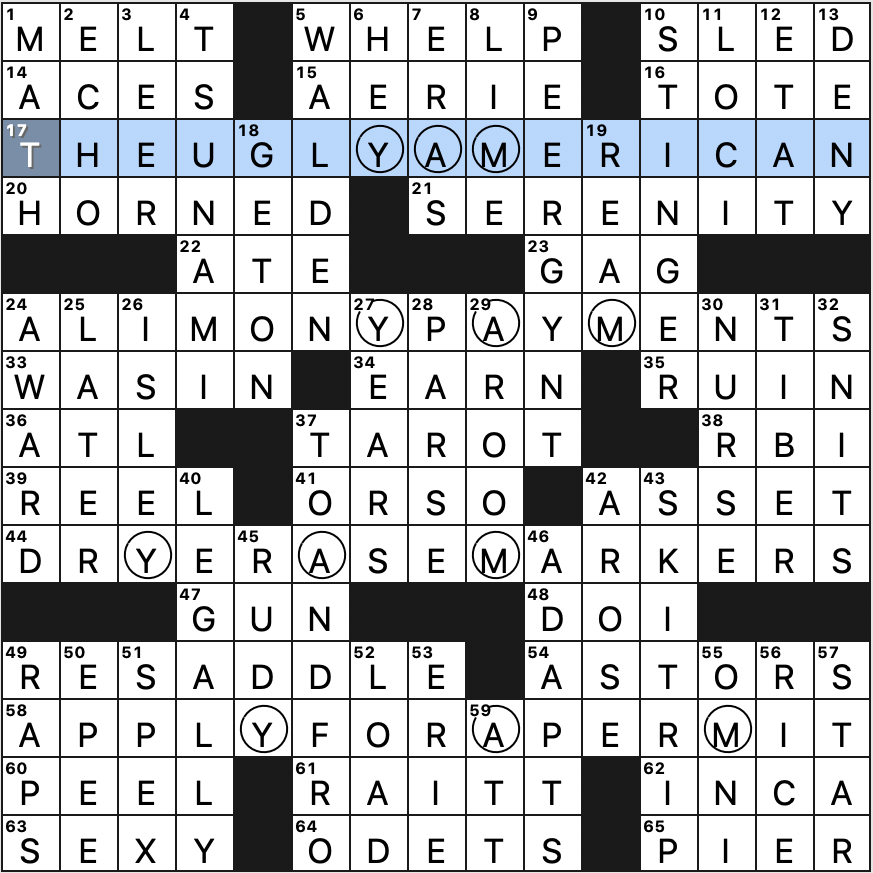 I guessed the theme before filling in a single letter, so no thematic aha moment for me. But I like that each entry is a familiar grid-spanning phrase. It would have been amazing if the letters in question could’ve been centered exactly in the middle of the grid like the first entry. But that’s probably an impossibility when you add the grid-spanning constraint. In addition, each “spread” is consecutive with 0, 1, 2, and then 3 letters between the YAM letters, further limiting the number of potential entries. So despite the relatively easy theme, there are plenty of constraints going on here making for a nice, tight theme.

The long fill is has some sparkle with SERENITY, TSUNAMI, SKI TRIP, and TO AND FRO.

Also, PEER GYNT. I stepped away from this puzzle for a bit, and when I returned, my eye lit upon PEER GYNT and I was instantly reminded of the “Am I Pregant?” song which I binge-watched x number of times last night. I was hoping for an excuse to embed the video, and the puzzle offered up PEER GYNT. Thanks crossword gods! If the holiday has you stressed, enjoy a few laughs by watching this video a few dozen times. (It gets better with each viewing.) No, “Am I PEER GYNT?” is not in the song…but it could have been!

Clue of note: 1d. [One problem after another?]. MATH. Needed 3/4 crossings, but a fun aha moment to be had here. Nice clue.

A simple theme, but a nice puzzle nonetheless. 3.5 stars.

I hope everyone has a happy Thanksgiving! (Reminder: No WSJ puzzle tomorrow.) 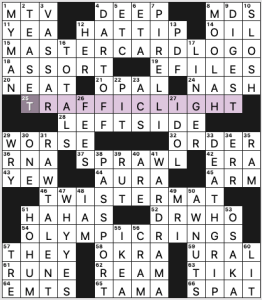 Loved the theme in this 14×16 tallboy puzzle, tall and skinny with left/right symmetry to accommodate the four-part theme. Start with two colored circles (red and yellow), then add another color at each step till you’ve got five:

Overall vibe of fresh fill and clues. Highlights in the fill include DEATH GRIP, RAW TALENT, HAT TIP, SLOSH, DART OFF, “WHY, YES,” and a tire brand I remember from my childhood, PIRELLI. (Did they make Pirellis for the 1973 Mazda RX-3 rotary wagon? Ours was lime green.)

Never excited to see URAL in a puzzle, but I’m digging the tectonicity of 59a. [___ Mountains, formation made by the collision of the continents Laurasia and Kazakhstania]. A quick visit to Wikipedia offers a little detail. I did not know there’d been an ancient continent called Kazakhstania. Laurasia was a supercontinent, eventually split asunder by the Atlantic Ocean.

I deplore DR WHO as an entry and that “informally” in the clue doesn’t salvage it. Purge from your wordlists, constructors! 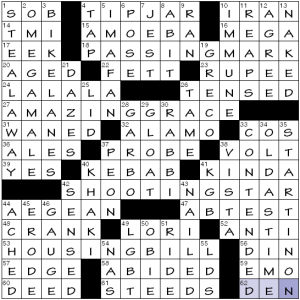 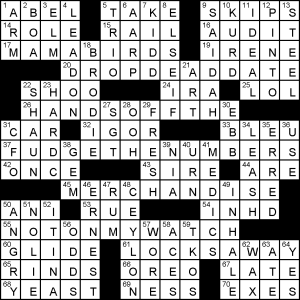 I’m not sure I totally follow what’s going on in theme of today’s puzzle by Lance Enfinger & Jeff Chen. The revealer is [“Won’t happen as long as I’m around,” and a summary of 20-, 26-/45-, and 37-Across?], NOTONMYWATCH. As far as I can tell, phrases with time related words are clued to be negative reactions to proposals for features of watches?

A bit tricker of a solve for me today but lots of fantastic fill, including one of my favorite bands! 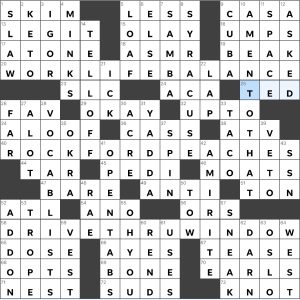 Theme: the word “hard” can be added before the first word of each themer to make a new phrase

WORKLIFEBALANCE is a constant give and take that’s never done. The puzzle’s title clued me in on ROCKFORDPEACHES by helping me get the first part but I needed a few other crossings before I could get the rest (I know, I know, I need to see that movie!). Cluing was stellar and I placed DRIVETHRUWINDOW in one go. With the theme, we get HARD WORK, HARD ROCK, and HARD DRIVE. At first, I wanted to put “hard” after the start of each themer but that wasn’t quite it. Thanks to Sally and her post to explain it—plus it always has a plethora of facts about the fill, so be sure to check it out too for more.

Stumpers: MINKS (needed crossings), AMIRITE (stuck on “right”), and IGOR (new to me)

One of my favorite bands of all-time TED Leo and The Pharmacists made the grid! Such amazing music and he doesn’t preform much anymore with his band or solo; however he is part of The Both with Amy Mann and also plays guitar for her too (which is odd to me, knowing how awesome of a performer he is as lead or solo). A classic and fan fave for the band, though he’ll play it on rare occasion as a solo is “Me and Mia”, which he preformed in a studio in 2017. My husband and I have seen him 3 times live (Madison, Pittsburgh, Cleveland) and we’ve definitely go to another live show if we had a chance. So he chose “Biomusicology”, as his pick to share with you all and I found a pretty good live concert version of “Biomusicology” to give you a feel for being live with them. Seriously though, go check out all of their awesome punk albums with amazing story-laden, fast paced lyrics and driving rhythms with fantastic guitar, drums, and even cellos (in studio recoding of “Biomusicology”)! 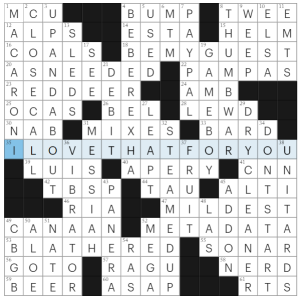 Whoops, forgot I was on New Yorker duty today! I enjoyed this one.

Easy, breezy puzzle, though some of the fill is on the tough side for newbies: OCAS, BEL Canto, APERY, RIA.

Entirely new to me: [___ Day (celebration for those who shun pi as a mathematical constant), TAU. Wikipedia elucidates, “Two Pi Day, also known as Tau Day for the mathematical constant tau, which is approximated as 6.28, is observed on June 28 (6/28 in the month/day format.”