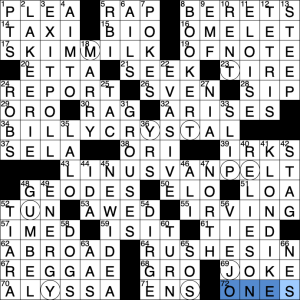 hello and welcome to episode #755 of matt gaffney’s weekly crossword contest. this week, guest constructor Mike Graczyk brings us a delightful week 3 puzzle called “What a Character”. the instructions for the puzzle tell us that this week’s answer is what you might be if you solve it. okay, what are the the theme answers? it’s not entirely obvious at first, but a glance at the clues for the two longest answers, combined with the title, suggests that we’re interested in punctuation in the clues. it’s a bit more specific than that, though: each of the symbols that shares a keyboard key with one of the digits (1–9 and then 0) appears in exactly one clue:

while it was evident fairly immediately that we needed to be paying attention to those special characters, and it did not take long to find all ten, the next step was, i thought, considerably less evident. what do we do with those characters? the answer is a step that will be familiar to veterans of mystery hunt-style puzzles: indexing. since each of those special characters is associated with a number via the keyboard layout, we take that number N and use it to pick out the Nth letter of the answer to the clue in which the special character appears, like so:

circling those letters in the grid and reading them off spells… uh… MTYTPEUJYS, which, okay, is garbage. but it’s garbage that looks like it could spell something out if you rearranged it. in particular, i noticed that you can get TYPE from those letters, which seemed promising. in fact, at this point you can get, or at least guess, the answer by anagramming those ten letters, but the actual solution is considerably more elegant: instead of reading off the letters in grid order, we are supposed to sort them numerically by keyboard key, from 1 to 9 followed by 0. doing so rearranges that string into JUST MY TYPE, an apt meta answer.

i thought this was really, really elegant. both tricky steps were techniques that are more common in puzzle hunt puzzles than in crossword metas, so they occurred to me relatively quickly, but it was refreshing to see them here in a slightly different context, and the final answer itself is quite perfect. i think this may be the first puzzle i’ve done by mike graczyk, but i’m hoping it won’t be the last, because i really enjoyed it.

This entry was posted in Contests and tagged Mike Graczyk. Bookmark the permalink.