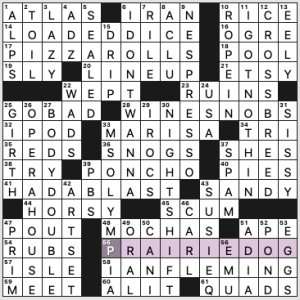 Solid, not-too-tough, 72-word Friday puzzle with lots of sparkle in the longer fill. Faves: LOADED DICE, PIZZA ROLLS (eww), WINE SNOBS, PRAIRIE DOG, BODY DOUBLE, MS. OLYMPIA, “I DON’T WANNA” (my mantra), NESPRESSO, NIGHT SHIFT, and “I GOT NOTHIN’.” Yes, that’s two “I” phrases (“CAN I?” is a third) but I like them both. I actually type I got nothin’ fairly often.

Glad I didn’t even see IROCS ([Classic Camaros]) while solving, because meh.

Fave clue: The contemporary context for IRAN, 6a. [Site of 2022’s “Woman, Life, Freedom” protests]. I appreciated the Iranian men’s football/soccer team standing silent during their national anthem at a World Cup match, in solidarity with the women who would very much like to not be hassled (and arrested) by dudes enforcing laws about their appearance when they’re out in public.

Theme answers consist of entries that are actually three words in one: The unclued entire entry, a shorter word (in circles) which is a synonym for “a period of time,” and a clued word using the remainder of the letters. The revealer is PUT IN THE TIME (55a, [Make special effort, and a theme hint]). 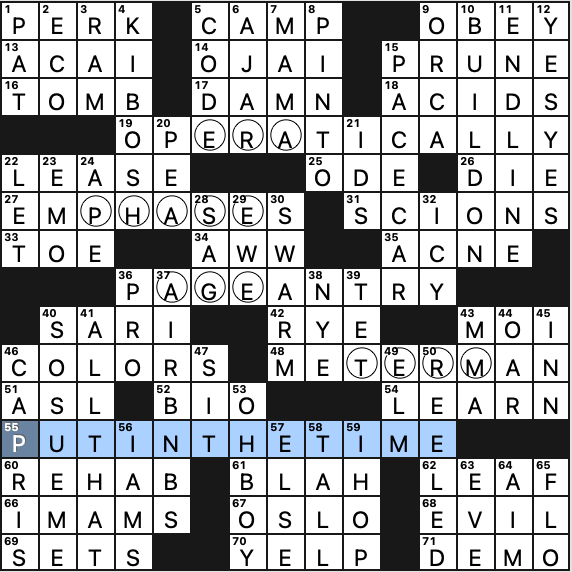 I found these pretty interesting, especially the fact that the entries are still crossword-valid once the “time” word is removed. I’m not so keen on that EMPHASES entry, though, since it results in only an initialism whereas the others are all words. Plus, the fact that it doesn’t have a question mark really threw me off for a while.

In the fill I liked KIBOSH, PACE CAR, “SO SUE ME,” ALL THAT, and “OH BOY!” I don’t know that I’ve ever heard the phrase END LINE [Football field boundary], and AIR BNBS would be better in the singular. 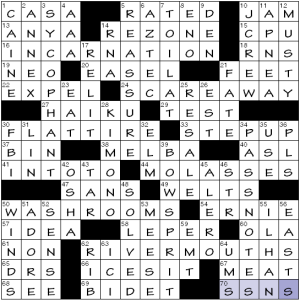 This is a bare-bones edition, as I meant to do the write-up last night but fell asleep and am now out the door in a short while.

The theme makes use of the two-letter postal abbreviations for US states. They come at the beginning of phrases, creating new ones:

I really like the wordplay going on here; fun theme!

One item of note. The long entry at 34-down (PASS NOTES) has the semblance of another theme answer because of its length and because it starts with PA, the abbreviation for Pennsylvania, the Keystone State. No such issue with the symmetrically located 3-down SYCOPHANT.

I’m away this weekend, so look for other Fiendsters to cover the Wall Street Journal crossword and the Saturday Stumper. 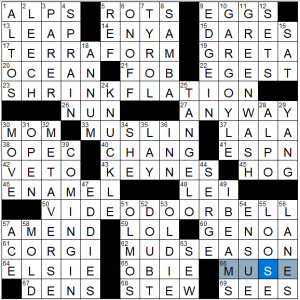 Our themers today are words added to Merriam-Webster’s dictionaries in 2022: TERRAFORM, SHRINKFLATION, GREENWASH, VIDEO DOORBELL, METAVERSE, MUD SEASON. This conceit should lead itself to colorful entries, and it does here, though I’m a bit distracted by TERRAFORM, which I’ve been hearing for years (SHRINKFLATION as well, though a bit less so) and am somewhat surprised it’s only made it to M-W now. A reminder that dictionaries are not the be-all and end-all of language. Perhaps most of us don’t need that reminder.

Nothing too notable in the fill for me — the choice of tennis player Michael CHANG in the center of the grid is a bit curious — Chang was undoubtedly a top name in tennis in the early 90s, and is a useful trivia answer as the youngest man to win a major, but is also not current. In contrast, I enjoyed seeing ELSIE clues to a Downton Abbey character rather than the marketing mascot.

Theme: Each theme answer had two double letters and all four sets spelled out KNOT twice. 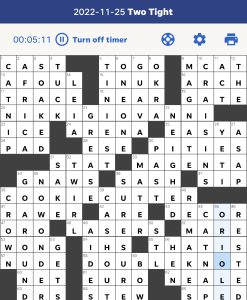 I’m notorious for my shoelaces coming untied, and so this was a very relatable puzzle. I appreciated that the title – “Two Tight” – hinted at the double letters and the KNOT spelling throughout the themers. NIKKI GIOVANNI is not someone I’m familiar with (though I’m linking the mentioned poem, “Allowables,” here), but once I had most of the crosses, it was easy to fill in her last name GIOVANNI based on what I know of traditionally Italian names. COOKIE CUTTER was also very fun and cute.

There was a lot of fill to like in this puzzle, and I particularly loved 36d [“‘Mm-hmm…’”] SURE SURE and 35d [“Unsurprising”] NO WONDER. NEIGHED, ORIOLE and CRAISINS were also really fun. Plus, we got both 1d [“Metaphor for something irresistible”] CATNIP and 44d [“Short sleep”] CATNAP.

Keeping it short and sweet today, but this was very fun!