Jim P here sitting in for pannonica who is traveling this weekend.

Whew! This was chewy but good! Theme answers are familiar phrases that hide some kind of weapon within. Those weapons “drop” (turn downward) and become their own Down entries while the main theme answer finishes in the Across direction. The revealer is at 69a DROP YOUR WEAPONS [Instruction for solving six clues in this puzzle]. 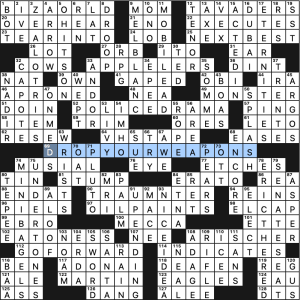 Not having any indication for where the theme answers are made it more challenging, but that’s appropriate for a Saturday. I enjoyed sussing this out and finding all the pieces. I especially like that all the weapons are their own answers and not parts of other Down entries. Expertly designed and executed!

Despite the intricate theme, there’s still plenty of fun long fill. POLICE DRAMA is great and gets a theme-adjacent clue [TV genre in which 69-Across might be said]. Other goodies include MEL BLANC, MOBILE AD, “OH, IT’S ON!,” OVERHEAR, NEXT BEST, MONSTER. ETERNITIES, VHS TAPE, OIL PAINTS, MINI BAGELS, ERIC THE RED, SENATE SEAT, “NICE IDEA,” and GO FORWARD. Plenty to like here!

And a couple head scratchers: PIELS [Beer with 1950s spots featuring Bert and Harry]. This looks to be a regional beer. I needed every single crossing. Also, not very excited about ZEALOTRIES taking up so much space. I can’t imaging anyone ever using that word. 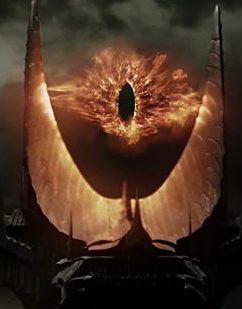 The EYE of Sauron atop Barad-dûr, Sauron’s fortress

Jim P here sitting in for Amy who is hopefully enjoying the night off with her feet up. 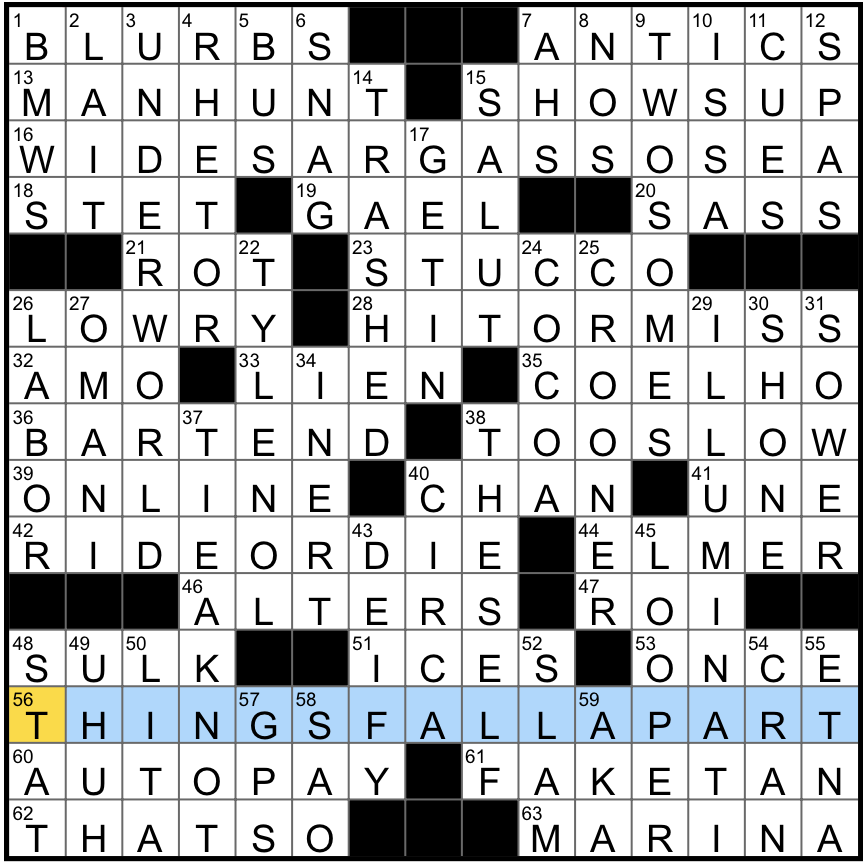 We have a very nice debut puzzle on our hands with a literary mini-theme going on:

Being a not-very-good English major at least helped me recognize the titles (though I haven’t read them). If nothing else, they make for a lovely pair of grid-spanning entries.

There’s even more literariness with UNDERWORLD clued as [Locale in Dante’s “Inferno”], and author COELHO [Paulo who wrote “The Alchemist”]. This last one is at least on my Audible wishlist (read by Jeremy Irons(!)), so maybe I’ll get to that one sooner rather than later.

I also liked the pairing of HIT OR MISS and RIDE OR DIE, the latter being a modern bit of slang which I learned via crosswords. Other goodies: MANHUNT, ILLUMINATI, TWOSOMES, TIE A KNOT, AUTOPAY, FAKE TAN, and “THAT SO?”

Today I learned the word RHETOR [Classical orator]. Of course I know “rhetoric” but I didn’t know it was based on another word.

By the way, reading the constructor notes over at Wordplay, I’ve learned that Ms. Ajayi is one of the first constructors to come through the NYT’s Diverse Crossword Constructor Fellowship. Nice to see the program helping new constructor produce such quality work. Congrats on a fine Saturday debut! Four stars from me. 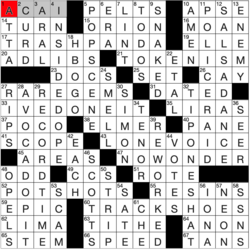 Sorry to say this one wasn’t my cup of tea. I’m blending my constructor and solver selves here to say that one big reason I got to that unsatisfyingly short 2:26 solving time is that there are no entries in this puzzle longer than 10 letters, and there are an awful lot of 4s and 5s — 46 of the puzzle’s 72 words, to be exact — that make it way too easy to rip through the solve. It doesn’t help when 1-Across is one of them and it’s clued in a not-at-all-challenging way: ACAI as [Berry from Brazilian palms].

Those 10s — TRASH PANDA, TRACK SHOES, POLICE RAID, SALSA DANCE, AVOCADO PIT, RECORD TIME, TIP ONE’S HAT — lacked that elusive quality of “sparkle” to me. One reason TRASH PANDA, which I think is the best of these, didn’t do it for me is that it feels like it’s been making the rounds in puzzles lately (most recently in Robyn Weintraub’s NYT on 11/18, which of course the constructor and editor wouldn’t have known about; also see Paolo Pasco in TNY in June). 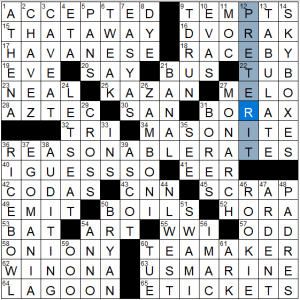 A day late in adding this review in, covering for pannonica. This was not the challenge I expect from Saturday Stumpers, even ones with Stan’s “Les Ruff” by line, signifying a lighter lift for the solver. The grid is appealing – PRETERIT [12d Verb for the past] required a bit of a mental dive back into my school days – and smooth, but the cluing falls flat for me.

I’m uncertain of the connection between “Seattle” and LETS EAT [24d Anagram for SEATTLE] other than it shoehorns an anagram in, [58a How some bagels are made] and [62a Joyce the mom in “Stranger Things”] each feel similarly off and casual for me, particularly in this venue. Did EVAS [10d] repair Skylab, or did the astronauts conducting the EVAS do that? I quite liked [Born leader] for MONARCH and [Hoppers, for instance] for ART, but in general this cluing is more straightforward with the trivia and more casual than I expect even from the easier Stumpers. 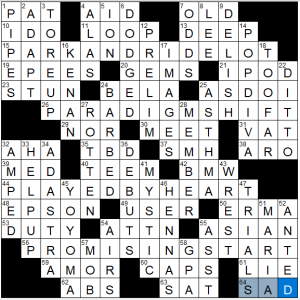 Themers split the letters of PART to either end, and aptly, either P/ART or PAR/T, reflecting a “side part” of one’s hair. 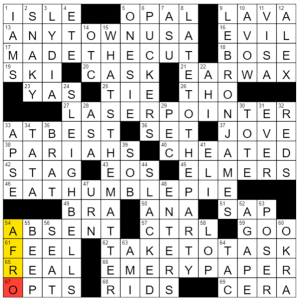 (Oh gosh, solidarity with Matt in being late!) This was a fast and fun puzzle for me this morning. Anyone who knows me knows I do not know sports. Like, at all. So I was super happy when I got 9D LEBRONJAMES just off the LE-!  The clue for LASERPOINTER is my favorite – I’m imagining a stressed-out academic coming home after a hard day, digging around in their bag for a laser pointer and vegging out playing with their cat.