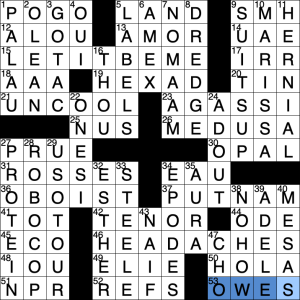 hello and welcome to episode #756 of matt gaffney’s weekly crossword contest, a week 4 puzzle called “Consonantal Drift”. the instructions for the puzzle tell us that this week’s answer is a five-letter interjection I hope you won’t utter when you get the meta. well, that might not be an issue, since i haven’t figured out the meta. what have we got?

there are no particularly long answers in this undersized (13×13) grid. the longest are a pair of 9s reading across:

i can’t see what to do with those. the other longest answers are a whole bunch of 7s reading down in the northeast and southwest corners.

what about the title? it’s definitely trying to draw our attention to the consonants. whether it’s the consonants in the grid or the ones in the clues, i don’t know. there is a type of wordplay called consonantcy, where two words or phrases have the same consonants in the same order with the vowels altered in any way, like VOTE IN <-> AVIATION. i can’t help but notice that there are five all-vowel entries in the grid: UAE, AAA, EAU, OUI, and IOU. each of these is fairly common in crosswords, of course, but seeing all five in a small grid is striking. also, i’ve just noticed that they include two pairs of anagrams. hmm. i don’t know for sure that this matters—the fact that there are no consonants at all involved here gives me pause—but it does seem rather striking to be purely coincidence.

now i’m wondering if we’re supposed to match up entries that have the same vowels in the same place, with different consonants. that’s sort of the opposite of consonantcy (vowelcy? dissonancy?), but it’s more suggested by the “drift” in the title, if in fact “drift” is supposed to be clueful rather than just completing the pun on continental drift. scouring the grid for pairs of such answers … well, the pickings are slim. there are answer pairs like POGO and NOHOW, but i’d be more interested if they matched up in length with the vowels in the same places too, since it seems impossible to have a grid of any appreciable size without that sort of thing coming up by happenstance.

i’m wondering if we should be looking at words in the clues. sudafed in the clue for HEADACHES stuck out as being an unnecessarily specific word appearing in the clue, and similarly {Botulin, for example} in the PROTEIN clue was fairly noticeable. that said, i don’t see anything in the grid that sudafed or botulin would correspond to by consonantcy or … the other thing.

i guess {City east of Erie} OLEAN is interesting since ELIE is in the grid, and ERIE/ELIE differ only by that one consonant. maybe {“Open” autobiographer} for AGASSI corresponds to OWES. but i have to say this is very uncompelling. nothing here is giving me any kind of click—there are only so many combinations of vowels, so you’re just bound to see some of them repeated.

welp. whatever is going on here, i feel like i haven’t even seen step one. it’s frustrating, but i have to concede defeat. hopefully somebody in the comments will let us know what i should have seen.