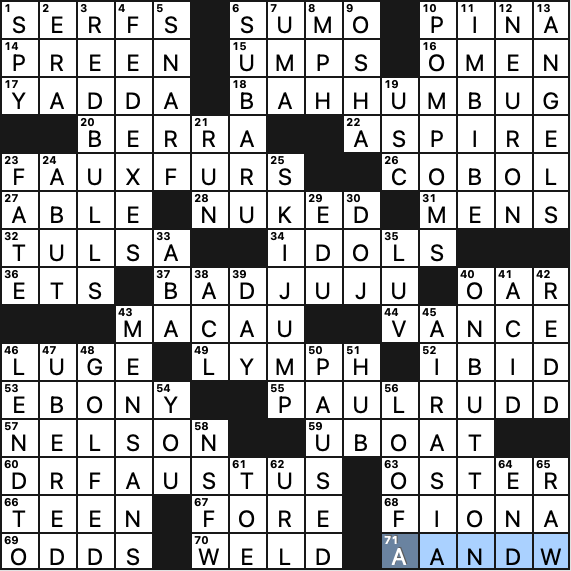 I like the little twist here where we’re focused on two U’s instead of a W, and the theme entries are all fun, especially BAD JUJU. The one thing that could be better with this puzzle is the title which is too generic to be of any use to the solver.

The surrounding fill is solid with SKI JUMP, RED BULLS, and POM POMS taking the lead. Do people use the term ON BUTTON? I think I generally hear “power button” since an ON BUTTON would imply that there’s a separate “off button”.

I had no problem with COBOL [Early programming language used in commerce]. Though I never worked with it, it’s still in my memory banks from my programming days. I did have difficulties in that SE corner where we had a mash-up of some proper names (VANCE and REDD) and ambiguous cluing ([It gets things going] and [Biological food processor]). 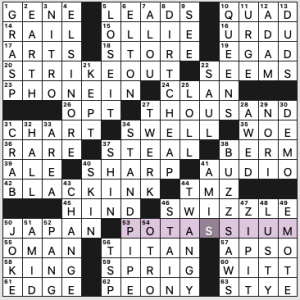 This theme is A-OK, with an emphasis on the K: 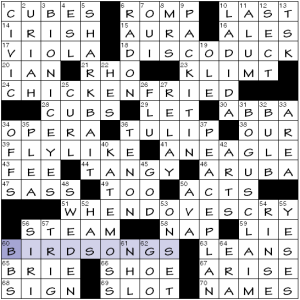 A familiar-feeling theme, but a quick search of our site didn’t turn up anything similar. Maybe it just feels like such a natural one. Onward.

All guys, so here’s a tonic:

Also, a plug for the excellent resource that is the Macaulay Library at Cornell’s Ornithology Labs. All sorts of media—photographs, audio recordings, and more. I believe they also have a mobile app. 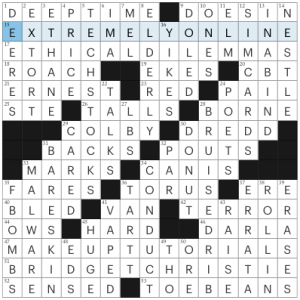 4.25 stars from me for this 68-worder, whose difficulty is pitched right at that Wednesday level (easyish Fri NYT but not a Mon NYT–easy Thursday TNY themeless).

New to me: DEEP TIME, [Vast temporal scale of geological events]. Also had not known BRIDGET CHRISTIE, [Comedian who won an Edinburgh Comedy Award for her show “A Bic for Her”].

Deterred from entering MALWARE by software being in the clue, [Type of program targeted by antivirus software]. 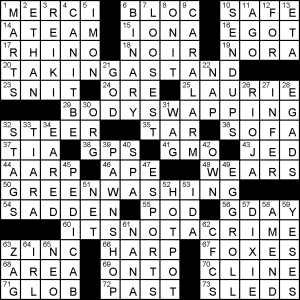 Today’s puzzle by Hoang-Kim Vu & Christine Simpson features three phrases with present participles; as the revealer, ITSNOTACRIME, suggests each is not a crime, but they are clued with an actual crime that could be playfully describe those answers. So:

I’ve timed this poorly; it seems our daily power cut is happening anon.

This puzzle is filled with very apt fill and some of my favorites, especially since I’m coincidentally on the mend! 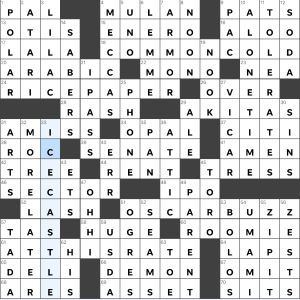 Theme: the word “cut” can be added after the last word of each themer to make a new phrase

A fun themer set, well mostly fun. Hopefully everyone avoids the COMMONCOLD and all of the other illnesses going around—stay healthy! Summer rolls wrapped in RICEPAPER are very refreshing with often paired with a peanut sauce, typically filled with shrimp, rice noodles, fresh basil, and julienned veggies; I enjoy a spicy peanut sauce with extra lime in it though I skip the olive oil as we use natural peanut butter that’s already a nice consistency. This movie with Michelle Yeoh (so good in all she’s in!) has well-deserved OSCARBUZZ is still on my watch list though I really should get to it soon. ATTHISRATE has excellent cluing that get at the crux of this sentiment and was another easy fill for me. How about you all? With the theme, we get: COLD CUT, PAPER CUT, BUZZ CUT, and RATE CUT.

Fairly smooth solve, those I needed several crossings so it was a lot of backtracking to chip away at it. Overall, loved the fill and bonus fill in particular, the theme and great themer set. 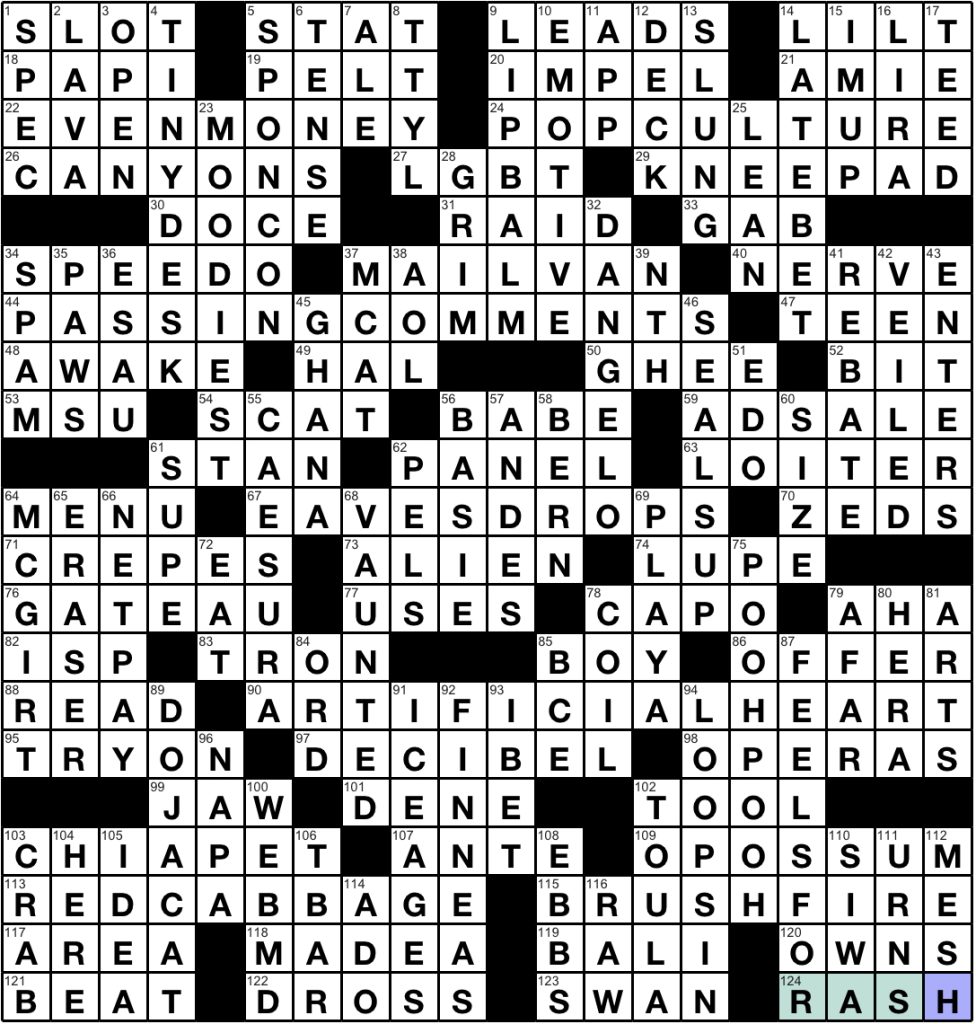 This week’s AVCX Classic was a large puzzle with a 4/5 difficulty from Emet Ozar and Matthew Stock’.

And here’s Beyonce’s ‘If I Were A BOY‘