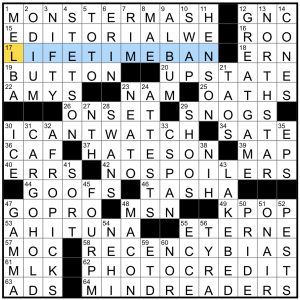 Solved this one on a laptop without Black Ink solving software so I used the NYT web interface and I really do not groove on it—so take my solving time with a grain of salt, and don’t assume this is Saturday-tough … unless it kicked your butt, in which case I’ll agree it’s a toughie! I did slow myself down with 1d, guessing HERE’S rather than MELBA toast, which ruled out MONSTER MASH and sent me elsewhere in the grid.

Lots of great fill here: That novelty song is stacked with the EDITORIAL “WE” and a LIFETIME BAN. “I CAN’T WATCH!” and “NO SPOILERS!” are fun. The bottom stack puts the terrific RECENCY BIAS atop a PHOTO CREDIT and MIND-READERS. Elsewhere, I liked “GREAT GAME!,” NORTH STAR, and K-POP.

20a. [Like Chicago, geographically], UPSTATE. True story: We Chicagoans call pretty much the entire state outside of the city and suburbs (and possibly the exurbs) “Downstate.” Freeport and Galena are well north(west) of Chicago, but I’d absolutely bundle them with all the places south of Chicagoland. I half suspect New York City does a similar thing—is western New York deemed to be upstate?

Good morning! This puzzle gave a good start to my Friday. I had no idea what was going on with the theme until I got to the revealer, which was literally the last word. That’s where I like it.

The theme answers don’t appear to have anything in common:

I looked for something inside the answers that would connect and couldn’t find anything. 69a solved the mystery. [One doin’ it for themself in a 1985 Eurythmics hit…and a lead-in to the first word of each starred answer] is SISTER. SISTER SHIP, SISTER ACT, SISTER SLEDGE, SISTER CITY. The first is new to me. My husband, far more interested in war and transportation than I am, knew it immediately. A very solid theme that’s perfect for the Inkubator vibe.

What I didn’t know before I did this puzzle: see above for rage rooms and SISTER SHIP. I also did not know that Prince declined a STAR on the Hollywood Walk of Fame.

And of course I will leave you with this. Annie Lenox and Aretha Franklin. Watch it.

Paul Coulter’s Universal crossword, “Have It Both Ways”—Jim P’s review

Theme answers consist of familiar compound words or two-word phrases where the first word and the second word (backwards) can be clued the same way. 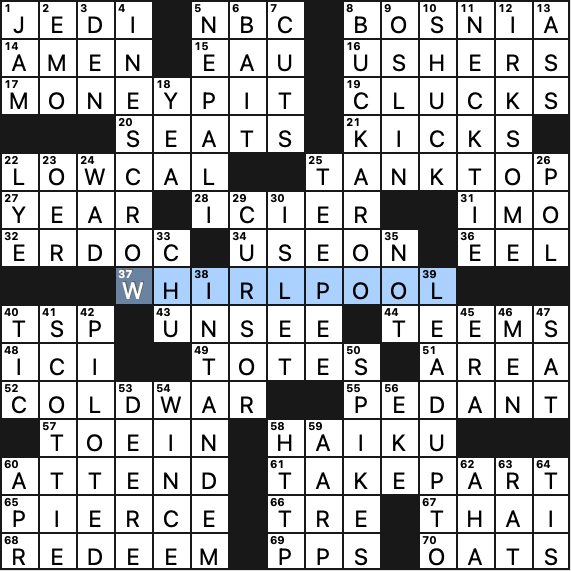 Really cool theme. I don’t know how you would go about finding phrases that match this pattern without poring over many, many potential entries. I guess you’d start by finding words that spell a different word backwards then see if those words are part of a compound word or two-word phrase. But you’d still have to go through a lot of entries just to find a few where the first word and second word backwards can be clued the same way. The end result, though, is pretty nifty, and a good idea well-executed.

I’m loving BUCKAROO in the fill. NECKTIE, IRKSOME, and SCOTTIE are nice as well. Not so keen on ER DOC, though it’s not exactly terrible. LOW CAL seems weird to me, too. If you’re going to shorten “calorie” to CAL, wouldn’t you also shorten LOW to “lo”?  I’m betting that little section could be tidied up by changing 33d CHU to THU, thereby allowing more options for 32a. But I feel I’m picking nits. 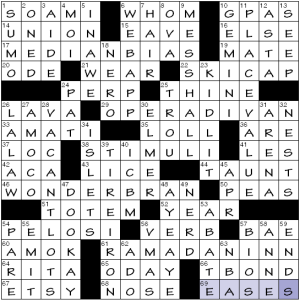 The letter N is suffixed to words in phrases to wackify them.

It all works well. No fancy flourishes such as banishing Ns from the rest of the grid—and that isn’t an indictment of any sort.

Theme: The first word of each theme answer is a type of fund. 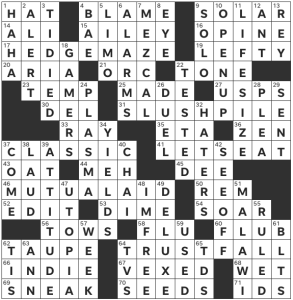 I thought that these themers were particularly fun and clever. I loved filling in HEDGE MAZES, especially with the crossing 18d [“Fortniters, for example”] GAMERS and 7d [“Agave-based spirit”] MEZCAL. MUTUAL AID was also really well done in that “community survival programs” helps you to get to MUTUAL AID and you get the historical fact of the Black Panthers’ administration of such programs if you weren’t already familiar.

This puzzle had a visually appealing symmetrical structure in its diagonal waves down the center. I moved through pretty slowly today, held up by a couple of the names I was unfamiliar with, like AILEY and DEE (but getting them on fair crosses). I liked the progression of 58a [“Annual ___ shots”] FLU to 60a [“Botch”] FLUB, which reminded me a bit of Anigrams. BAE, I’M FREE, and VEXED were some of my favourite fill.