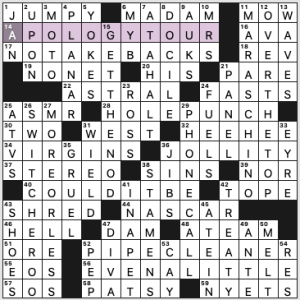 Okay! That settles it. Yesterday’s puzzle took me almost 50% longer than this one, so I hereby declare that the Friday and Saturday slots were switched.

I really enjoyed this puzzle. Such a fun vibe throughout, with JUMPY, the great APOLOGY TOUR, “NO TAKE-BACKS,” ASMR, a HOLE-PUNCH clued as [Inefficient confetti-making tool], quaint JOLLITY, “COULD IT BE…?”, an arts & crafts PIPE CLEANER (I have half a mind to order myself a bunch and start making little homunculi), EVEN A LITTLE, PATSY Cline, the old SWITCHEROO, GET THE NOD, and MARASCHINO. Lots of energy in the vocab.

That said, if I never saw IN A PET again in a crossword, it would be fine by me. [Where the coins surgically extricated by a veterinarian had been]? 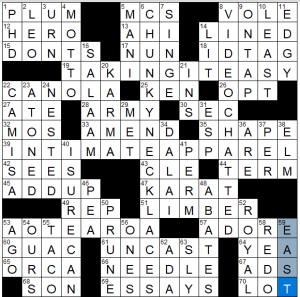 Themers in this diagonally-symmetric grid contain the string -TEA- 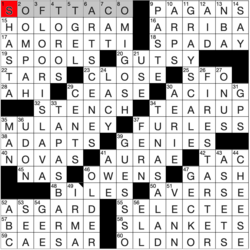 Another short writeup from me this time.

The top left corner of this puzzle is, IMO, markedly harder than the rest of the grid, which made it hard to get the first foothold and smooth sailing thereafter.

I liked: SLANKETS, FLOOR IS LAVA, TAPAS BARS, TUNA SALAD (to be clear, I like the entry as it’s evocative and everyday, but I do not actually like to eat tuna salad!), HOLOGRAM. I would’ve liked a bit more wordplay and a bit less trivia in the clues. 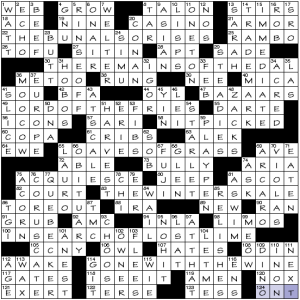 Perfect title for a theme in which the titles of books have a noun replaced by a type of comestible. Only one letter is changed in each theme answer, which is presented as an alternate title.

In case your meta-mind is wondering, the neither the introduced letters nor their substituted counterparts spell anything meaningful. SYLETTD for the latter and BLROKLE for the former.

In conclusion I’ll gently point out that both books and meals are meant to be consumed. 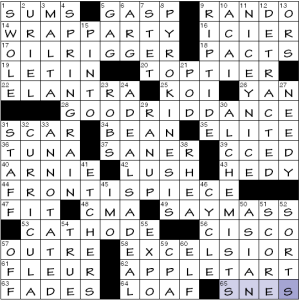 Surprised by how fast this one went. Started off promisingly, then sparsely, but ultimately it collapsed and crumpled quite readily.

Not minding that this one was a relative pushover, as I have Many Sundry Tasks pending this morning. 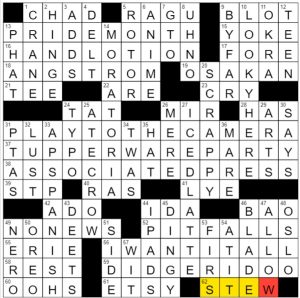 A fun and quick 72-worder with a cute center stack and plenty of other long and fun stuff throughout. Clues that are silly and make me laugh always get top marks from me, and today [Event where burping is a selling point?] for TUPPERWAREPARTY fits the bill. I don’t get why OREO (50D [Cookies and cream brand?]) gets a ? – discuss.