New byline alert! Pretty cool that it contains near synonyms (sterling/clean). With that kind of a name, this better be a super smooth grid (just kidding). 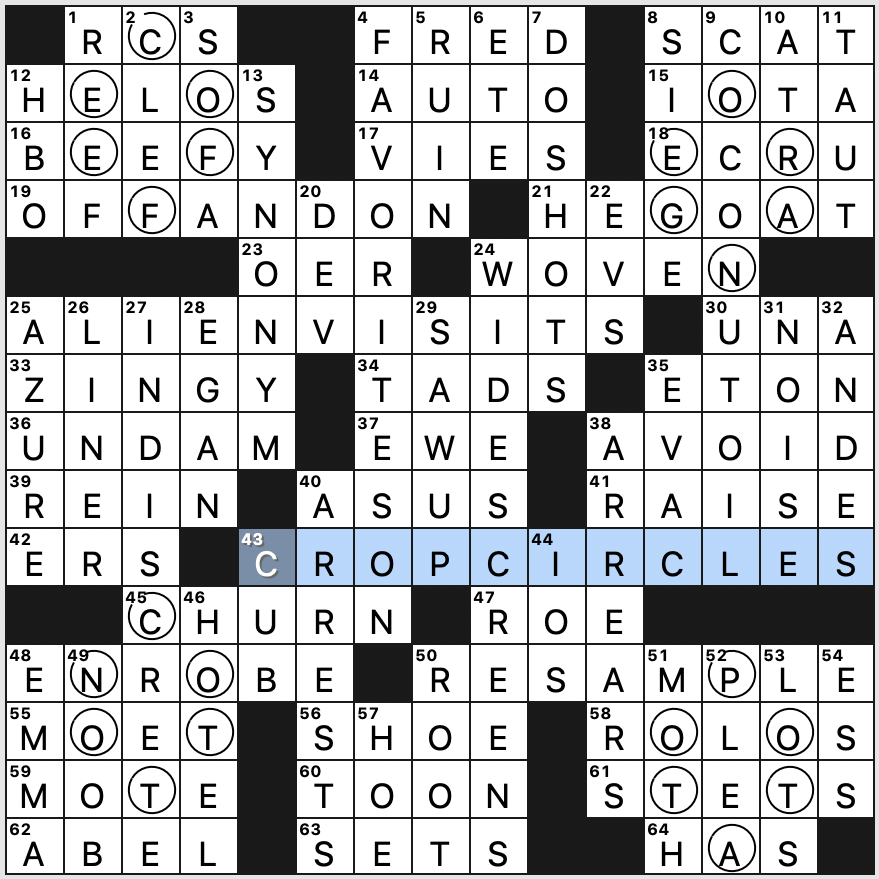 But it is a nice theme based on CROP CIRCLES (43a, [Phenomenon represented four times in this puzzle]) with the (roughly) circular-shaped groups of circles spelling out various six-letter crops. These are COFFEE, ORANGE, COTTON, and POTATO.

Bothered by the fact that the CROP CIRCLES in the grid aren’t actual circles? Well, remember that actual CROP CIRCLES come in a variety of shapes.

In addition to all that stuff, we have ALIEN VISITS [What some think 43-Across are signs of]. Kind of a weird entry (I wanted ALIEN VISITORS), but I’m not too bothered by it. I also picked up on the fact the puzzle shares a title with M. Night Shyamalan’s 2002 film which involved—you guessed it—CROP CIRCLES. Fun theme which I enjoyed sussing out. 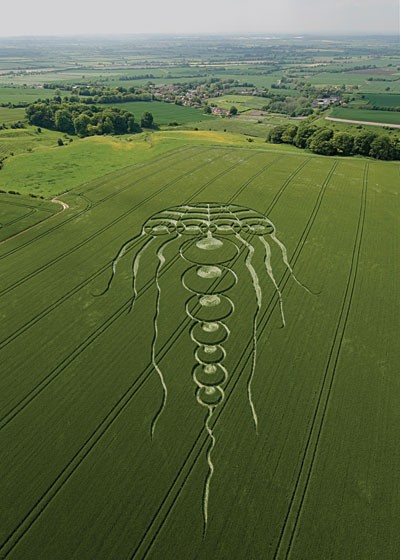 Elsewhere, we’re treated to COCONUT OIL FAVORITE SON, OFF AND ON, and WIDESCREENS. I also liked sussing out INDISCRETE [Not divided into parts] which I incorrectly filled in as IN ONE PIECE to begin with.

I don’t recall seeing EVS [Lightning and Bolt, for short] in a puzzle before, and cruciverb.com shows only four previous uses—the latest from 2019. I expect we’ll be seeing it more in the future. (FYI, the Ford Lightning is a pickup truck and the Chevy Bolt is subcompact.) 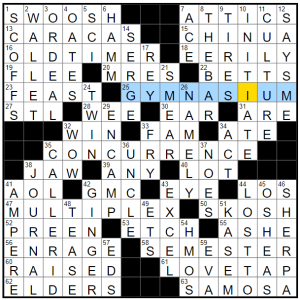 What an interesting word theme–English words that have entirely different meanings in other languages:

Enjoyed the overall vibe here, with SWOOSH and SKOSH, a SAMOSA and GINGER cookies, CALLER ID. Timely, when blogging here in my JOURNAL after the Georgia Senate runoff was called: [Was defeated by], LOST TO. Did not know the Vegas casino called O’SHEAS (and I want that to have a possessive apostrophe too, though a two-apostrophe wouldn’t’ve looked good). 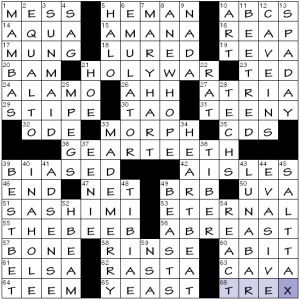 This was a very fast solve, but I wasn’t able to figure out the theme as I was going along. Scattered entries had parenthetical numbers introducing them, but nothing obvious linked them. Perhaps it will be more evident in repose.

Okay, I see it. It’s a ‘before-and-after’-type sequence of homophones. The W-pattern they make in the grid is, I gather, supposed to evoke an oscilloscope’s display. Thus there is naturally left-right symmetry.

I am not from a part of the country that pronounces “merry” and “Mary” the same, and I find it exceedingly weird. Otherwise I found the theme all right, but not particularly substantial.

Overall, the cluing and fill were straightforward. Solid—or should I say sound?—construction.

I mistakenly recalled this video as featuring an oscilloscope, but it seems I was mistaken. But it’s so darn infectious (if a bit jarring for morning listening) that I can’t resist including it. 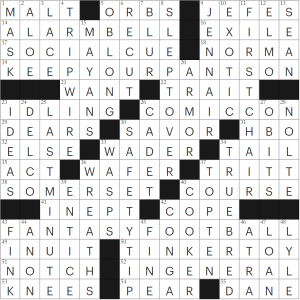 Patrick Berry delivers the goods in today’s “lightly challenging” themeless. My solve started off smoothly and seemed to slow gradually as a I moved into the SE corner. The clues were tame for the most part, but there were still a few head-scratchers. If I had to guess the seed today, I’d put money on 19A [“I’m getting to that!”] KEEP YOUR PANTS ON.

I was hung up most by the square at 9A/9D. JENN-AIR is the [High-end appliance brand owned by Whirlpool] that probably should’ve come to me, but I started with HEFES at 9A, and I didn’t know until researching that JEFES is the standard Spanish spelling for [Barcelona bosses]. I’d say the trickiest clue was at 43A [Team-building exercise?] which works out to FANTASY FOOTBALL. I also liked 42D [Get in line for a party, maybe] for CONGA. Elsewhere in the fill I loved FIRST CHAIR, LAST MINUTE, SAFETY TIP; and the double-9 stacks ALARM BELL/SOCIAL CUE and TINKER TOY/IN GENERAL.

The only miss for me was 34D [Like many show dogs] TRUE BRED — this doesn’t feel right because PUREBRED is much more common. Yes, a purebred dog is the result of “true breeding,” but I don’t think anyone would say, “This is my true-bred dog.”

Curious what other solvers thought of this one! 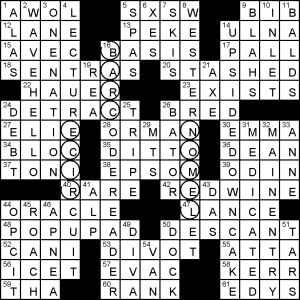 Editor emeritus Rich Norris returns as a constructor today. It features a thing which is clearly going to have a vertical wrinkle from the outset. As it happens, three sets of circles spell out RICE, CRAB and LEMON from bottom to top: UPSIDEDOWNCAKE(S). Interestingly, two of the three are savoury. They’re contained in: [Itinerary for touring speakers], LECTUR(ECIR)CUIT; [Brunch dish with ham and peppers], WESTER(NOMEL)ET; and [Flatbed scanner relative], (BARC)ODEREADER.

Three of the four downs in the “fat” top-left bottom-right are quite creative: WAVEHELLO, ONENATION (kind of a long partial, kind of not); MAINENTRY. MEDICATED is a one word answer.

Not too many tricky answers or cute clues today:

A longer solve for me today but still enjoyable! 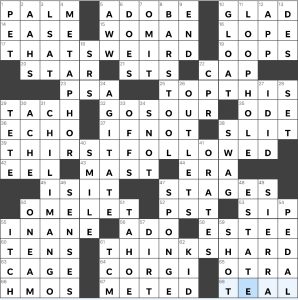 Theme: the word “third” is split (or parted) in each themer, starting and ending the entries

In an odd trend with solving today’s themers, I got the first half long before the second half of each and needed a few crossings. THATSWEIRD, right? THIRSTFOLLOWED makes sense as a completed phrase but during the puzzle I kept thinking “trap” or “friended” and couldn’t help but see “allowed”. The cluing for THINKSHARD had me thinking “deep”. The theme has a bonus that each themer is split at a different point, which is fun!

Nothing was particularly tough but everything just took me a bit longer to fill so it all added up. I also got tripped up in the western section, the second themer crossings. Felt like a smooth solve and I really like the grid design and flow of the puzzle.