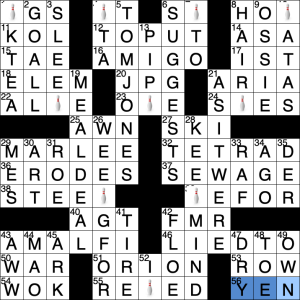 hello and welcome to episode #757 of matt gaffney’s weekly crossword contest, a week 1 puzzle called “A League of Their Own”. i solved the puzzle without the instructions, and it wasn’t terribly difficult. what’s the theme? for the second week in a row, we have a 13×13 grid with no particularly long answers. more unusually, we have what appear to be—but are not—two-letter answers in the grid at 4-across and 6-across. what we do have is a rebus puzzle, with ten squares getting PIN squeezed in:

these ten PINs are arranged in an inverted triangle, as in tenpin bowling, which must be the meta answer. that is very tidy and elegant, and as a meta, it’s easy enough for a week 1. the crossword itself was much harder to break into than a typical week 1, because you’re not really expecting a rebus and also because the rebus squares are concentrated at the top of the grid due to the geometric layout of the PINs. TOM JONES was actually the first entry i put into the grid, as it’s one of the very few entries near the top of the grid that doesn’t contain a rebus square.