Hello! We’re supporting the New York Times Guild members’ 24-hour walkout on Thursday, so this blog won’t be reviewing the Friday NYT crossword till daytime Friday. Please join us in not accessing the Friday puzzle on Thursday night, whether it’s via the Internet or the app. There are lots of other crosswords you can do in the meantime! Many thanks.–Amy

Theme: TAKING A PASS (57a, [Sitting this one out … or a hint to the starred clues’ answers]). The other theme answers have the word PASS added to familiar phrases to create crossword wackiness. 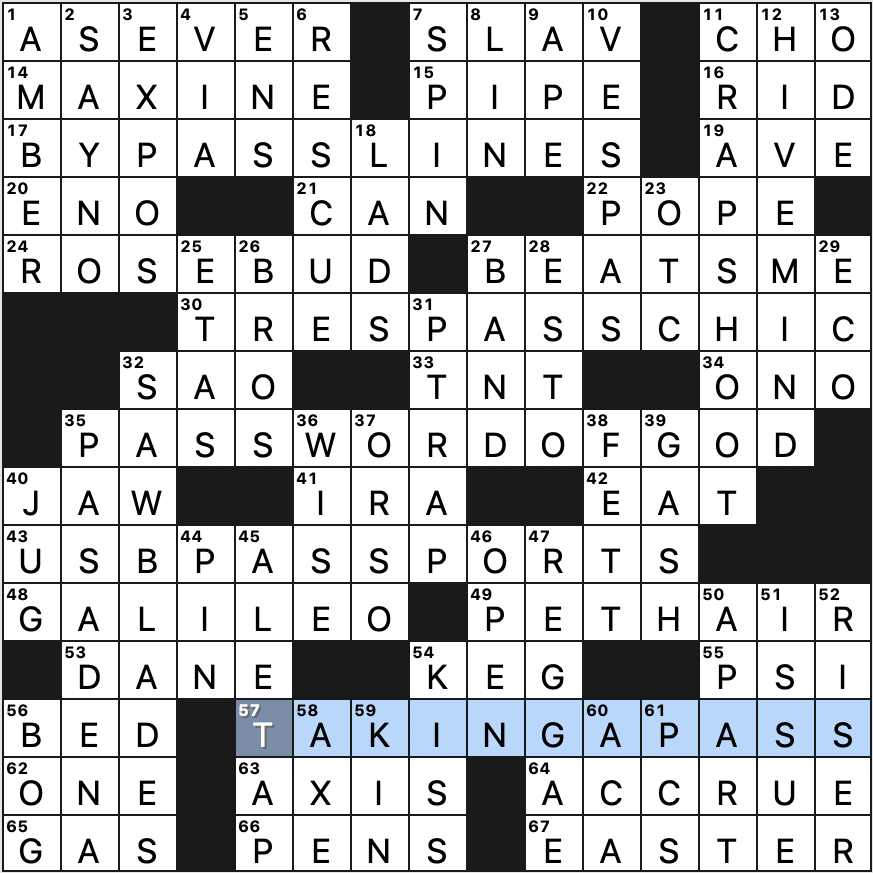 Having a four-letter repeated word gives the solver quite a lot of freebies during the solve, but I’m not complaining. These were mostly nice, and I especially liked the notion of wifi in heaven. That one was worth the price of admission. But why would you need internet security if all the baddies are in the other place? And what would God’s password be? His kid’s birthday (jc12250000)?

Anyhoo, we have some nice long fill in the stacked CRAP SHOOT and HIVE MIND plus the almost-thematic PASADENA as well as ROSEBUD, “BEATS ME,” GALILEO (Galileo), and the bane of my existence: PET HAIR. 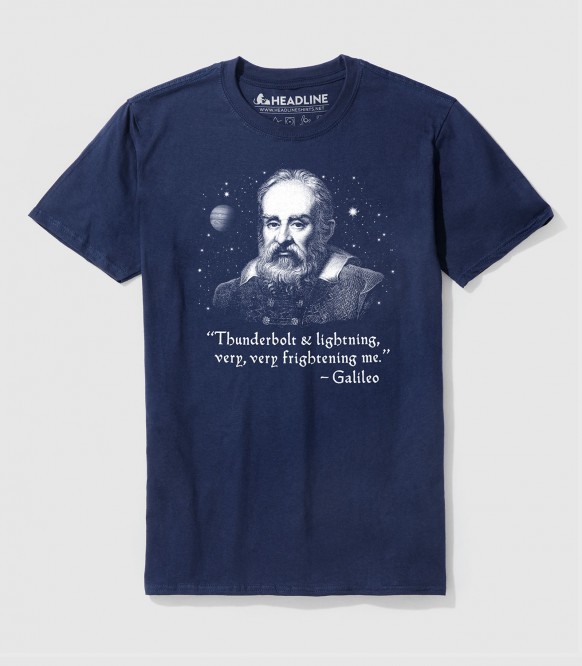 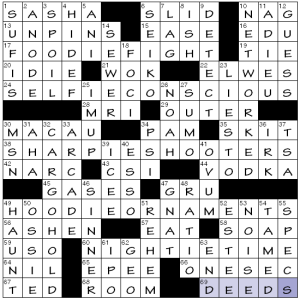 The cutesifying suffix -IE is introduced for the theme entries.

Theme: Each theme answer in this puzzle is a Down answer, and it begins with letters spelling out SHE. 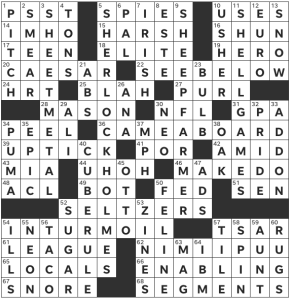 Having binged House, M.D. by renting the DVDs from my local library, I easily plopped in SHERLOCK HOLMES. I needed a little help with SHEET METAL, and MASON and PEEL gave me a nice boost with the latter half of the word especially. I had a similar experience with SHELL GAMES, partly because I really struggled with that NE corner for some reason. EURO fell right in, but I could not remember the name of Mariah Carey’s HERO at 19a, nor what a 10d [“Theater worker”] was called, so I kicked myself when I finally saw USHER.

The bottom section likewise took me a bit. IN TURMOIL was what I accepting. I also read 55d [“Food in an edible shell”] as more focused on the food in the shell rather than thinking about food with an edible shell for TACO. I also wasn’t familiar with 62a [“Chief Joseph’speople”] NIMIIPUU, but I always appreciate when Indigenous names are in puzzles, especially in a way that encourages us to learn more about Indigenous history. You can learn more about the NIMIIPUU people here. The crosses here really supported me, especially once I got IBM and ZINES.

I really enjoyed this puzzle! From four themers to some really rich fill (and a reference to an incredible song), I had a great time going down a bunch of different rabbit holes. Have a great weekend! 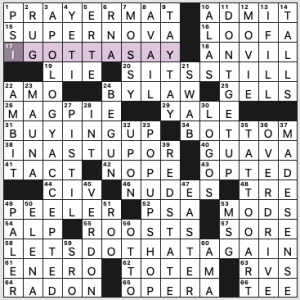 This puzzle was a bit harder than the average Fri NYT, which is not a complaint. I like challenging, crisp themelesses.

Fave fill: PRAYER MAT is a great 1-Across and the clue’s clever: [Something faithfully rolled out]. “I GOTTA SAY,” SITS STILL, BUYING UP, “APOLOGY ACCEPTED,” POP-UP SHOP, TAY-TAY, RED STATE, and “DON’T GET UP” are also colorful.

I don’t follow [Lawyer/voting rights activist Sherrilyn] IFILL on Twitter, but the folks I do follow retweet her regularly and I always like what I see (and the name was a gimme. Sounds like it made her day to be in the puzzle! (Yes, the late journalist Gwen Ifill was her cousin, if you’re wondering.)

This one doesn’t feel natural to me: 58a. [Excited shout after a thrill ride], “LET’S DO THAT AGAIN.” Feels like arbitrary word choices. “C’mon, let’s go again!” “I wanna do that again!” “Let’s do it/this again.”

I totally spaced this on Friday. I’m adding it in because it’s a fairly complex theme so this is for posterity, I guess – for anyone who goes looking after the fact.

The “thud from another room” is what happens when you cat pushes something off a surface. Each theme answer has a letter shoved off, leaving just the CAT. There are helpful circles.

And the revealer: 71a [Reprimand to a certain mischievous pest…who’s made some appropriate changes to this grid] is KEEP YOUR PAWS OFF.