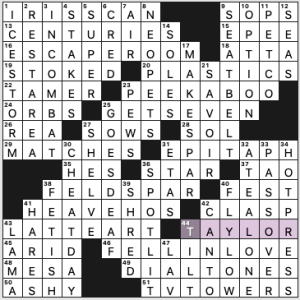 This one was quicker than I expected for a Sidurday themeless. Pretty 64-word grid here.

Didn’t know: 34d. [Machine that gives paper a smooth finish], HOT PRESS. Sounds like a hairstyling term, but it’s an industrial process. Also new to me: 43d. [Bhikkhu’s teacher], LAMA. A bhikkhu is a Buddhist monk.

I kinda wanted BAKELITE for 20a. [The Father of ___, moniker for the inventor Leo Baekeland], because of the inventor’s surname. Whaddaya know? The Father of PLASTICS did indeed start with Bakelite in 1097.

Smooth fill, lots of tricky-but-not-too-tricky clues to engage the mind. Four stars from me. 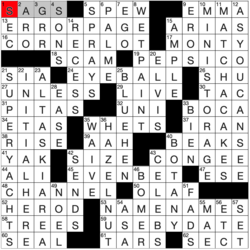 Here’s a light and easy (just on the edge of being too easy) Saturday. Some highlights and notes:

The stretch of 46D to 55D is five clues, four of which are people’s names. I think it would have been nice to clue NOEL as a non-proper, and perhaps also ASA (even though it would require going to a partial phrase). 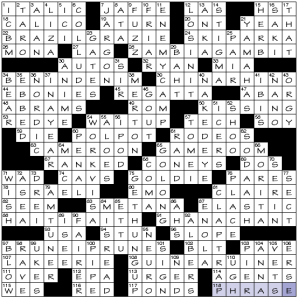 Simple but kind of brilliant theme here. Phrases composed of a nation and another word that differs only in the first and last letters.

Once you cotton to the theme, there’s a guarantee of being able to fill in the repeated letters should you need them. My solving experience was rather fluid so I didn’t require such a strategy. 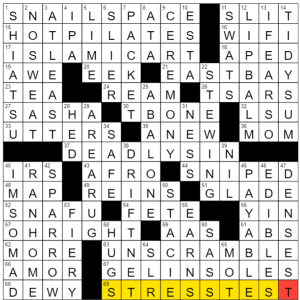 At 4:58, a smidge tougher than normal for me. I got a little hung up by putting in bAyarea, not knowing whether mAliA or sAshA is older, typing in SLyER, aHRIGHT, and STACey, being utterly confused that *anything* at Disneyland would be free, and a few other reasonable small errors that needed correcting. All in all, a good solve. I prefer the difficulty in a puzzle to come from clever ? clues rather than the either/or sorts of entries listed above but this is a fine puzzle, well constructed and not too much -ese.

Thank you Tom and Zhouqin! 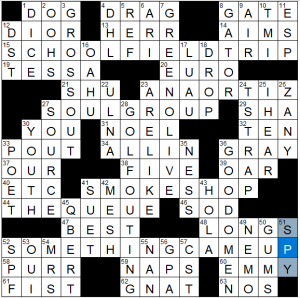 Dual theme sets! We’ve got both STOP and GO in our puzzle, though you need to re-parse STOP as “S to P” for the acrosses:

15a [Occasion for a permission slip] SCHOOL FIELD TRIP
27a [The Stylistics, for example] SOUL GROUP
41a [Place that sells rolling papers] SMOKE SHOP
52a [It turns out I actually can’t make it] SOMETHING CAME UP

The downs are two-word phrases starting with G and O: 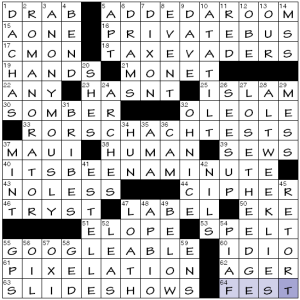 I think this has been the toughest Stumper yet since I started writing them up here at FiendCo. Frankly, I’m amazed (and relieved) that I managed to complete it at all.

Got the first breakthrough in the upper right, where the straight-shooting 13d [First pronoun in the Gettysburg Address] OUR helped out. Then I was able to speculate that 5d [On target] might be APT and that 14d [Eliot collection at UT Austin] could be (though it felt very iffy) MSS.

At this point I took a real leap for 5a [Provided bonus footage] ADDED A ROOM. May have been subliminally helped but rationally hindered by the duplication of 16a [Roomy party rental] PRIVATE BUS.

Dumb mistakes I made that postponed progress and completion: 28d [Indie pubs] ALT-WEEKLIES, for which I had ART WEEKLIES; 48d [Possible premed precursor] AP BIO, where I blithely filled in the nonsensical AP SCI. And more literally, for a long time I had DUMB for 1-across [Not bright at all] DRAB. I don’t consider that a dumb mistake but it was, y’know, a ‘dumb’ mistake.

Clues I still don’t understand, or—if I do—consider them to be extreme stretches: 23a [Never got] HASN’T, 38a [For you and me] HUMAN, 44a [Do the math] CIPHER (I have now learned the intransitive verb sense of the word), 24d [Curves for convenience] ARCHES, 56d [Silence, perhaps] OIL (okay, I finally see this one—a verb—but it was the last entry I filled in and skeptically so).

And then there were many clues that were just very, very tough/obscure. Won’t list them here, but I’m sure other solvers’ lists would match up pretty well with mine.

Favorite clue: 63a [Old-timey exhibitions with carousels] SLIDE SHOWS. For a long while I was convinced it had to be STATE FAIRS (this is the origin of my AP SCI blunder).