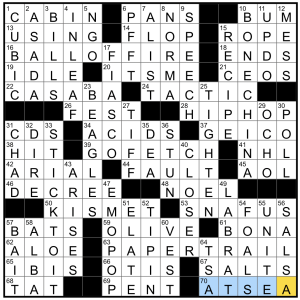 Theme: GO FETCH – each of the theme answers begins with something a dog might fetch.

Cute theme, and all the dog-loving solvers will go wild for it. The windmill arrangement of theme answers is always pretty, and it’s nice that the clues are starred for new solvers to see what’s theme material and what isn’t. I like how well STICK TO IT disguises the word “stick” – PAPER TRAIL also effectively changes the literal meaning of the base word well. BONE CHINA and BALL OF FIRE are fine answers, but neither one was particularly standout to me. Their main contribution is getting “Great Balls of Fire” stuck in my head for the last half hour.

Given that there are 5 theme answers, the grid is remarkably clean, as I would expect from  a constructor like C.C. There are very few proper nouns in the fill at all, which helps maintain fair crosses on Monday. The hardest cross for me was IN LEAF/CASABA, because I don’t like melon and thus don’t think about it often, and I’ve personally never heard the phrase IN LEAF There weren’t too many notable bonus answers, but some fun ones were HIP HOP and LAB RAT.

Congrats to Anthony on a great debut and to C.C. for another great puzzle!

The theme consists of things that are OVER MY HEAD (61a, [“I don’t get it,” and where the starred answers might be found]). 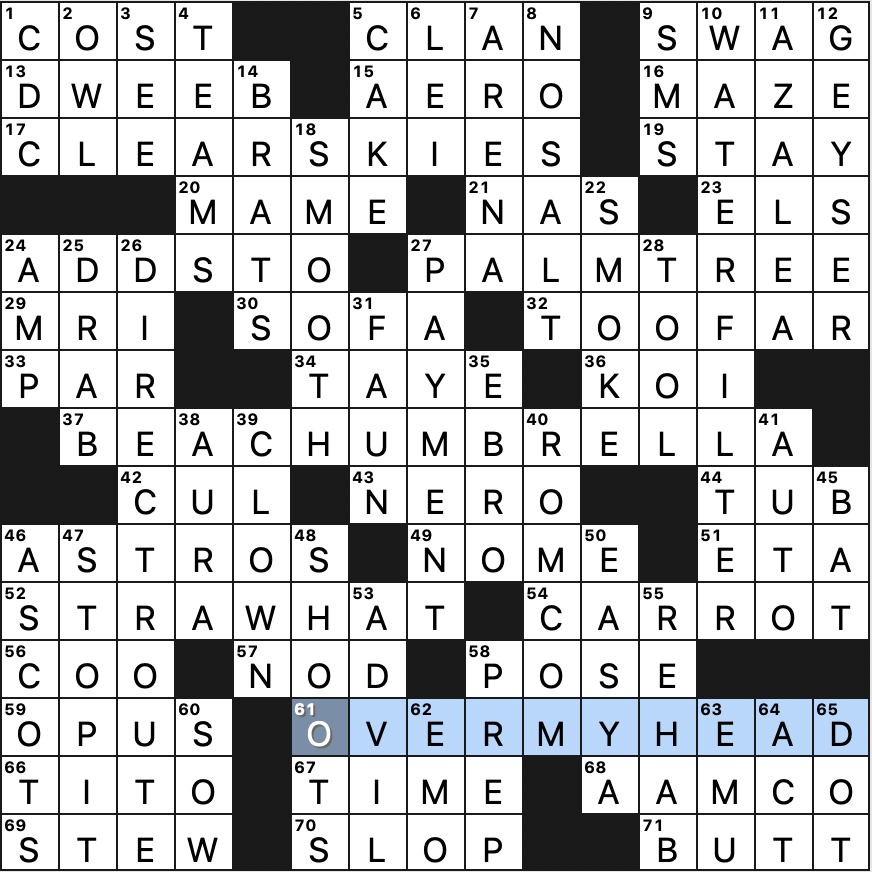 In a nice touch, notice that the items listed are from furthest to closest. Also, there’s a definite tropical vacation vibe going on here, which makes me think one or both of the constructors were sitting on a beach when they thought this one up. We had a Christmas party at our house the other night and I tend to play reggae and island holiday music, so I can still hear the steel drums (see the video below which features three of the four theme items).

Solid fill with WATER FILTER and DIRECT ROUTE leading things off. I also liked “TOO FAR?” [“Did I cross a line?”]. In the tough-for-Monday category, we have crossing proper names TAYE Diggs and the Spanish river EBRO.

Clue of note: 69a. [Étouffée or feijoada]. STEW. I know étouffée is the Cajun shrimp dish, but the other is new to me. Feijoada is a Brazilian black bean stew and that country’s national dish.

The theme today is pretty wide open, but the far-to-near aspect and the tropical vibe won me over. 3.5 stars. 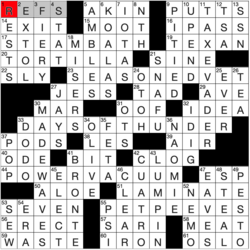 Another Monday, another sub-2-minute puzzle with a not-so-typical revealer at 55A [Irritating behaviors, and what the ends of the answers to the starred clues may be?] This gives us PET PEEVES, which, if read as “things that peeve a domestic animal,” explains the theme: 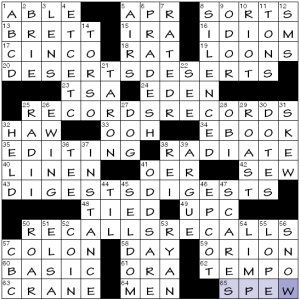 It’s said that moving—along with death of a loved one, major illness, divorce, and loss of a job—is one of the most stressful life events.

This crossword, on the other hand, was extremely low stress. The repeating homonymic theme answers helped it go very quickly.

In each case the verb precedes the noun, and the verbs’ stressed syllables are generally the second while the nouns’ are first—must be one of those hidden rules of English or something. Not going to check, but it seems to me that the pairs are etymologically akin.

Very much a warm-up type crossword. 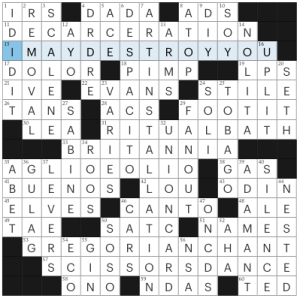 Another excellent themeless from Natan, with lots of interesting fill and clues.

Not sure I’d seen the word DECARCERATION {[Aim of some abolitionists]) before, but certainly I’m familiar with the movement against the U.S.’s outsized use of mass incarceration. Entirely new to me: SCISSORS DANCE, [Quechuan custom that takes its name from the bladelike rods wielded by performers]; the DANCE part was easy to guess with a crossing or two.

4.5 stars from me. Natan includes more names/titles here than most constructors would use, and I sure like it. Not all of you do, but Natan’s puzzles usually hit my sweet spot.