Matt Jones’s Jonesin’ Crossword, “You Down With That?” – Erin’s write-up 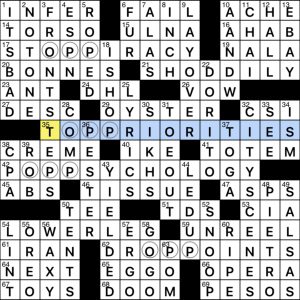 Hello lovelies! We’re bringing it back to the 1990s, with Matt inserting the 31-year-old (!) Naughty By Nature hit “O.P.P” across some two-word theme entries:

Time to move away from other people’s…property, and talk about some other things in the grid:

That’s all until next week!

Theme: MOVIN’ ON UP (66a, [“The Jeffersons” theme song, exemplified by this puzzle’s improvements]). The other theme answers are familiar phrases whose last words can also be dwellings. As the solver proceeds down the grid, there’s a marked improvement in dwelling type. 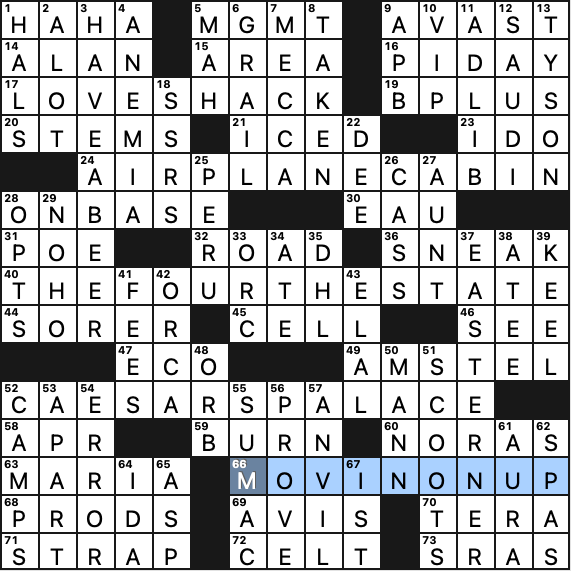 My first thought on hitting the revealer was that I expected each theme answer to have a self-contained improvement, i.e. some obvious change to the original phrase. But that’s clearly not the case since the phrases are well-known in-the-language terms. It took an extra beat to realize that the abodes were improving as we go down the grid. It’s an unfortunate reality of solving a grid that the solver usually progresses downward, which in this case means that the nicest home is at the bottom, antithetical to the MOVIN’ ON UP premise. But it’s not hard to take that extra mental step to put things right.

The other thing is that I was a little confused on the cluing. The first and third clues seem like things that could actually work. A couple (sans kids presumably) might call their home a LOVE SHACK. A journalist might call their home THE FOURTH ESTATE. But I can’t really make sense of the other two in the same way.

HAVE A BEER (don’t mind if I do) and EASTERNER are our long offerings today. Not bad considering they each cross three theme answers. I like seeing it in a grid, but it always saddens me that Europeans, who write their dates day-first, can never experience the joy of PI DAY.

The rest of the grid is solid though I could do without seeing SSRS [Lith. and Latv., once] ever again.

Of course, we can’t get out of here without that Jeffersonian earworm, can we? Please, enjoy.

Oh, this is a debut, so congrats to our newest constructor! 3.5 stars on this one. 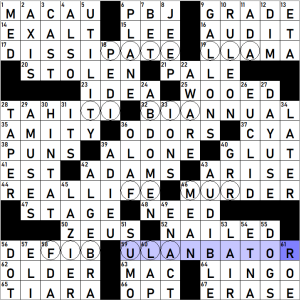 Theme: As the title says, this grid is literally breaking a leg across black squares. Ouch! Here are the “broken” theme pairs:

First, it seems this is a world debut for Tiffany (if our tags are any indicator), so congratulations on that! I really like that each theme pair fills a full row, and the set is symmetrical (well, the circles aren’t, but that’s fine). Those two constraints probably made this one a bit tricky for Tiffany to pull together. This leads into what I don’t really like, which is the use of the anglicized (it’s a little misleading for the clue to say “former”) spelling for the capital of Mongolia, Ulaanbaatar. To be fair, we’re set up for this from the jump with the alternative spelling of Macao at 1A. And, even though we all know a group of crows is called a murder, it is one of those words that stands out in a grid for the wrong reasons no matter how you clue it.

The fill gets the job done and stays clean for the most part. Some solvers really despise textspeak like CYA, and hanging prepositions like RULE ON and HINT AT; but, luckily for me, I’m not terribly snobby about these things. The math nerd in me enjoyed ALGEBRA and EUCLID, and I also liked DAY USE and AUDIBLE.

In the clues: I hadn’t really thought of PBJ as a [Vegan sandwich, for short], so I enjoyed that angle. [Balancing act?] was a fun clue for AUDIT. Including a real-life pun at 38A [“The bicycle collapsed because it was two-tired” and others] was a nice touch. Initially I had thought of IST for [Extreme suffix], because, you know, extremist, but the clue is really hinting at the superlative form of an adjective (i.e. bravest). Very sneaky nod to the theme at 3D clued as [Broken leg covering] for CAST.

All in all, I enjoyed uncovering one broken bone after the other as I cracked my way through this puzzle. And congrats again to Tiffany on the debut! 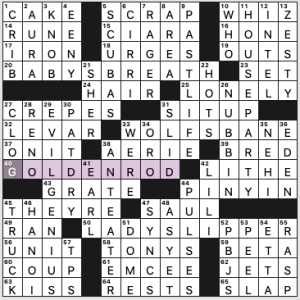 Ah, a botanical, punny theme! Right up my alley.

The NUBBIN clue surprised me. [Small ear of corn]? Merriam-Webster offers “something (such as an ear of corn) that is small for its kind, stunted, undeveloped, or imperfect” and “a small usually projecting part or bit.” I think of nubbins as just little things sticking out from something. 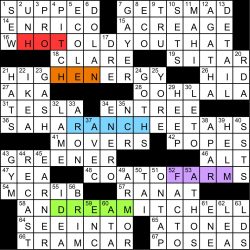 Good day, everyone! I hope you’re all doing well as we’re less than two weeks from Christmas! And less than three weeks from 2023!

Today’s crossword makes sure that we stay inside the house and stay warm. No matter what type of house. The circled letters in each of the five theme entries span multiple words, and those letters combined form a word that can come before the word “house.”

For those of a certain age (or those who just like Leslie Nielsen), I’m sure you can relate to what I’m feeling now about seeing ENRICO in the grid and having to think about the movie The Naked Gun, when Frank Drebin (Nielsen) ties up the opera singer that’s supposed to sing the national anthem at a baseball game, Enrico Pallazzo, then dresses up as an umpire to try and foil a plot to kill the Queen of England (14A: [Physicist Fermi]). Of course, the person tasked/forced against his will to kill the Queen was Reggie Jackson. Yes, the movie is as zany as what I just laid out to you in these last few lines. Here’s Nielsen as Lieutenant Drebin but dressed as the umpire (who people in the stands end up thinking is Enrico Pallazzo), calling balls and strikes while frisking players to see who is trying to kill the Queen. You’re welcome…

“Sports will make you smarter” moment of the day: HELM (39D: [Captain’s wheel]) – One of the elder statesmen in the National Hockey League, current Colorado Avalanche winger Darren Helm, 35, completed his first season as a member of the Avalanche last season by hoisting the Stanley Cup as Colorado won the championship last June. His series-clinching goal with 5.6 seconds remaining in Game 6 of Colorado’s series against the St. Louis Blues lifted the Avalanche to their first Western Conference finals appearance in 20 years. Helm, who spent his first 14 seasons in the NHL with the Detroit Red Wings, won his first Stanley Cup with the Red Wings in 2008. The 14-year gap in between Stanley Cup championships is the third-longest championship gap of any player in NHL history.

The theme is cute and I appreciated the MOT vibe in this puzzle. I had one issue with the fill which we will get to later. First the theme. There are circles. 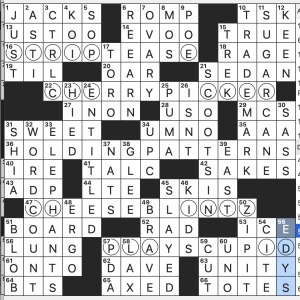 STRIPE, CHECKER, CHINTZ, PLAID. What’s the link? We find out at 36a [Flight paths above busy airports, and what the sets of circled letters literally are?] is HOLDING PATTERNS. Seems to me the answers with the circles within are literally HOLDING the PATTERNS rather than the letters themselves. That’s picking a nit, and I know it, and I enjoyed the mild aha! moment that came with the revealer.

So my issue with the fill: 6d [Gain back] is REEARN. This is a terrible entry. I get it. The entry crosses a theme answer. I’m not a constructor and I don’t have any suggestions about how to change it to get rid of the vowel string in the middle. It’s still a terrible entry and it made the puzzle less enjoyable for me, especially since it’s right at the top. For some reason an annoying entry early in the puzzle affects my solving experience more than one buried at the bottom.

What I didn’t know before I did this puzzle: I’ve heard of BTS but didn’t know they recorded a song called “Dynamite.” 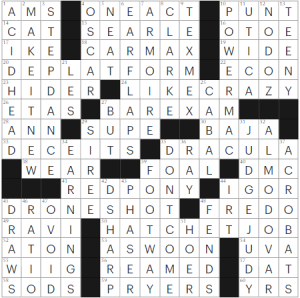 This one felt to be on the easier side of the Tuesday New Yorker scale. A good and fun workout nonetheless.

Editor: Anna Gundlach
Theme: The last word of each themer grows in dimension with each answer. 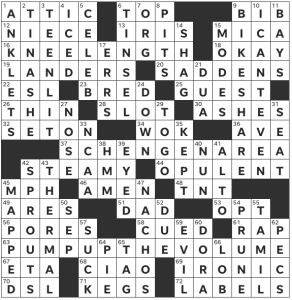 I love a simple, math-y theme, and this puzzle provides. I didn’t fully understand the theme until I put in PUMP UP THE VOLUME at the end, which is also my favorite theme answer – way to finish strong! I’ve traveled in the SCHENGEN AREA but had absolutely no idea how to spell it, so that slowed me down a little in the middle of the puzzle.

There are a bunch of fun fill answers today: TINASHE, TEEN LIT, I CAN’T EVEN, BIKE SHARE. Some favorite clues were [Like a driving instructor running a red light] for IRONIC, [www.transtexas.___] for ORG, and [Hair ___ (thin, glimmery hair accessories)] for TINSEL. That all being said, the puzzle did feel a bit choppy at times throughout the middle as there are so many short answers there. But if that’s the tradeoff for such strong corners, I’ll take it.