Title: “What’s in the Box” by Pete Muller and Mack Meller
Prompt: The meta for this puzzle is a famous artist.
Answer: Cat Stevens / Yusuf Islam 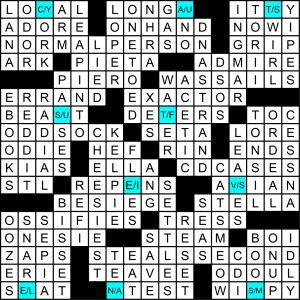 Lovely meta this month from Pete Muller and one Mack Meller. My hijinks antenna went nuts on this purported coauthor’s name, since 1) It’s December’s puzzle, so massive trickery of any kind cannot be put past our meta-maestro; 2) it has the same (4/6) enumeration as PETE MULLER, and 2.5: the two surnames are one mere letter apart, and 3) I’ve never heard the surname “Meller” before so could’ve been created for use in this meta! Also, not a byline I’ve ever seen on a crossword. Adding all those things up, I have this “Mack Meller” at a 51% chance of not existing. We shall see…

Solved the puzzle, and one clue stood out so suggestively that I circled it for later ponderage. After finishing the grid I didn’t see anything obvious, so I went back to this clue — and the meta fell right away. I had caught the rabbit, as they say over on the Muggles Forum.

I put the Schrödinger C/Y in that square, then went off in search of others. They were:

The Schrödinger squares spell two names of a great singer/songwriter: CAT STEVENS, under which he became famous as a singer in the 1970s, and YUSUF ISLAM, the name he took after converting to Islam in 1979. Note that he was also born Steven Demetre Giorgiou, though we can forgive Pete and Mack for not attempting to Super-Schrödinger that name in as well.

Lovely meta — and what about the Mysterious Muller Monthly Music Meta Maker, Mr. Mack Meller? He appears to be a Scrabble player of note, so we shouldn’t be surprised that he’s skilled in another field where letters go in boxes. So I hereby withdraw my suspicions regarding Mr. Meller’s existence…but I regret nothing! Meta-solving rewards paranoia. I present my now 27-meta-long MMMM streak as evidence of this.