It’s our second Sunday NYT puzzle in a row made by a solo woman constructor – I could get used to this! There’s something buggy about this puzzle, though… let’s take a look: 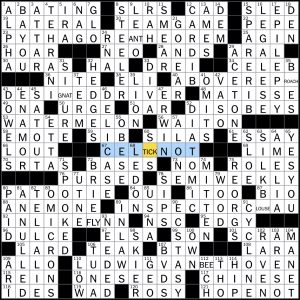 – 23A: PYTHAGORE(AN T)HEOREM [Hypotenuse-finding formula]
– 40A: ABOVE REP(ROACH) [Having an impeccable reputation, say]
– 43A: DESI(GNAT)ED DRIVER [One drinking soft drinks at a party, perhaps]
– 67A: CEL[TIC K]NOT [Symbol of Irish heritage]
– 89A: INSPECTOR C[LOUSE]AU [“The Pink Panther” character]
– 92A: IN LIKE [FLY]NN [Having successfully made it, slangily]
– 110A: LUDWIG VAN [BEE]THOVEN [Composer who studied under Joseph Hadyn]

Each of our themers contains a squashed bug, represented as a single-square rebus. It’s a fun theme that allowed for solidly in-the-language theme entries and a pretty clean grid full of fun bonus entries like PATOOTIE and WATERMELON. I don’t know that the puzzle needed a bug-killing title when some play on trapping these bugs might have also worked, so apologies to everyone out there who enjoys their bugs alive!

In lieu of my random thoughts, I’ll focus on a personal note about 99A:

I was part of the initial official cohort of test solvers for the NYT puzzle a year or two back. As part of that stint, I once reviewed a puzzle that had this puzzle’s same clue for SON, [Prince but not a princess]. I wrote the editing team and asked if they might change the clue, given that when I was a young SON, I so desperately wanted to be a princess myself. I know I’m not alone among queer men in that feeling. That such an innocuous entry and seemingly harmless clue could take a knife right to the heart of my young queer self (even as I push 40) was quite the surprise. I was so happy when they agreed to change the clue in that puzzle… so imagine my heart when I saw it pop up again in today’s puzzle. There are a jillion ways to clue SON and none of them require reinforcement of nonsense rigid gender binaries that do real damage. I have no idea where the clue originated (my hunch is that the constructor had a different clue here), but it’s ultimately up to the editors on which clues make the final cut. I hope they do better in the future.

That said, I still think the constructor did a great job building this smooth grid, and I enjoyed solving it (99A aside).  Congrats, and here’s to many more, Laura! 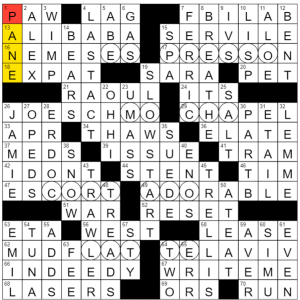 Because there have been so many great themeless Sundays lately, a themed puzzle is now a rare treat for me. And I enjoyed this one with my own MOCHA. No revealer required as the title ties it together perfectly. Though I got off to a bit of a SLOWSTART (19D [Bad thing to get off to in a race]) in the NW and thanks to unusual vocabulary like SERVILE and [Denouement] (4D), in the end it came together nice and clean. 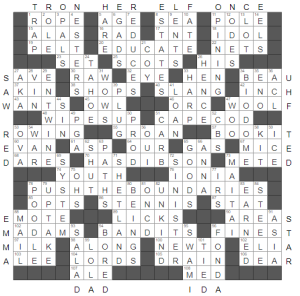 I have no good lede this week: our title is “Fringe Film Festival,” and entries along the edge of the grid extend one letter outward, forming twelve additional entries, all movie titles.

While the theme was quickly apparent and I solved it without, Evan does provide clues to the 12 films:

And a 13th — as we’ve seen from a few of Evan’s puzzle recently — tying it together:

13. [1983 film whose title is spelled clockwise in the first letters of the other 12 films] THE OUTSIDERS

THE OUTSIDERS, of course, is an apt answer to include in a grid involving entries around the edge, and there is one more theme-relevant entry at 78a [What edgy films do, just like 13 films in this puzzle] PUSH THE BOUNDARIES.

It’s a conscientious grid: unsurprisingly, all twelve films are common enough words, the 13th film is a nice touch, and all entries that extend past the 21x21x grid are themselves valid entries without the “extra” letter (T/RAP, R/OLE, etc etc)

Theme clues hint at people whose favorite letters are homophones for apt items. 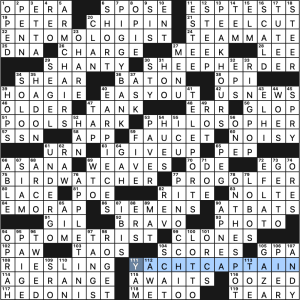 Nice enough theme. Some of these are a little squishy though. SHEEPHERDER is a legit term, but most of us would use the word “shepherd.” And is YACHT CAPTAIN an in-the-language phrase? The clue would work for any person who makes their life on the ocean, so might not there be a better option? But on the whole, it’s a solid theme. I liked the PHILOSOPHER entry best of all.

In the fill, the grid boasts many long juicy answers to sink our teeth into. Those stacks in the NE/SW are especially nice: ESP TESTS, STEEL-CUT, TEAMMATE, RIESLING, AGE RANGE, and HEDONIST. Elsewhere, ARMCHAIR, PEAK HOURS, PIGGY BANK, APPLETINI, ON THE SPOT, PINOCCHIO, EARPIECES, TELEPORTS, RING POP, EASY OUT, and “I GIVE UP” are all strong assets to the puzzle.

Did you know there were no less than three PINOCCHIO films this year. According to this list, the live-action Zemeckis/Hanks outing came in at #21 of the top 24 films about the little liar. That’s two worse than the Pauly Shore-dubbed Russian animated flm. Lastly, the Guillermo del Toro film just dropped on Netflix two days ago and is getting outstanding reviews. The clue is a simple [Geppetto’s puppet], but I wouldn’t have minded if it referred to the unusual concurrence of films this year.

I will end it there. Solid theme but with plenty of lovely long fill. 3.75 stars.

Theme: Each theme answer contains the wod “CARE,” making it the packaging of the puzzle’s title. 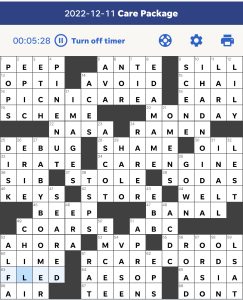 The theme of this puzzle ended up being exactly what I expected. However, I still wanted to fill 16a with PICNIC TABLE and PICNIC BENCH (both of which would’ve been too long) since they’re the more common phrases. Still, PICNIC AREA certainly worked. CAR ENGINE was pretty manageable, and it was nice to see RCA RECORDS written out in full since we usually see RCA on its own.

This puzzle was pretty straightforward for a Sunday. I liked the tea combos with 15a [“Elaichi ___ (cardamomtea)”] CHAI right on top of 18a [“___ Grey tea”] EARL. It was also really fun to start with PEEP at 1a [“Sound from inside an incubator”]. If you’re hungry, I hope that you had a snack before doing this puzzle since there was 24a [“Shio or shoyu noodle dish”] RAMEN, 60a “Its juice is used in larb”] LIME, 4d [“Seed stir-fried with sweet corn”] PINE NUT, and 49d [“Cook-off dish”] CHILI in addition to the teas and SODAS as beverages within the grid.

The nerd that I am, I also enjoyed 22a [“Org. with Artemis missions”] NASA and 26d [“Lake fed by the Cuyahoga River”] ERIE. Overall, just a fun Sunday puzzle to work through.