It’s cold, it’s dark, and it’s pouring rain, and this puzzle was a nice warm diversion.

It’s a 16×15 and we have two 16-letter entries. Despite that it played like several smaller grids, at least for me. 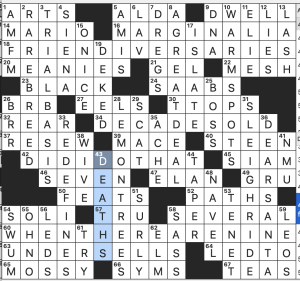 What I didn’t know before I did this puzzle: I’m ashamed to admit I’d never heard of No More DEATHS. I suspect I’m not the only one. Information and an opportunity to donate are here. 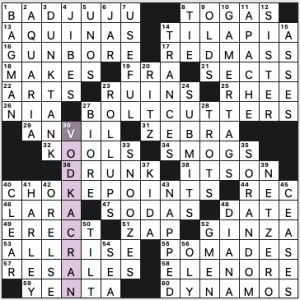 Okay, I don’t breeze through Kameron’s puzzles because he’s got that gift for writing challenging clues. But this would be hard for a Saturday puzzle … and it’s a Friday puzzle? Oof. Tougher than you expected, or is it just me?

First off, let me mention the grid/clue dupes that Shortz officially doesn’t care about, but that jump out at me: 50d. [Cause of a game‘s end] for a pinball machine TILT when GAMER TAGS is across the way, and 33d. [Complete bores], SNOOZES across from GUN BORE. Entirely different sort of bore, I know.

Wasn’t NetZero an old ISP? 39d. [Environmentalist’s goal for harmful emissions], NET ZERO. Not a familiar term for me. Ditto for 17a. [Annual Roman Catholic service for members of the legal profession], RED MASS. I can only think of the Game of Thrones Red Wedding. Also new to me: 58a. [Abbott known for her “Treasure Island” and “Grimm’s Fairy Tales” illustrations], ELENORE.

Theme: FROM DAWN / TO DUSK (17a, [*With 61-Across, wakeful hours, or where the last words in the starred clues’ answers will take you]). The theme answers comprise a word ladder with the revealer entries acting as bookends. 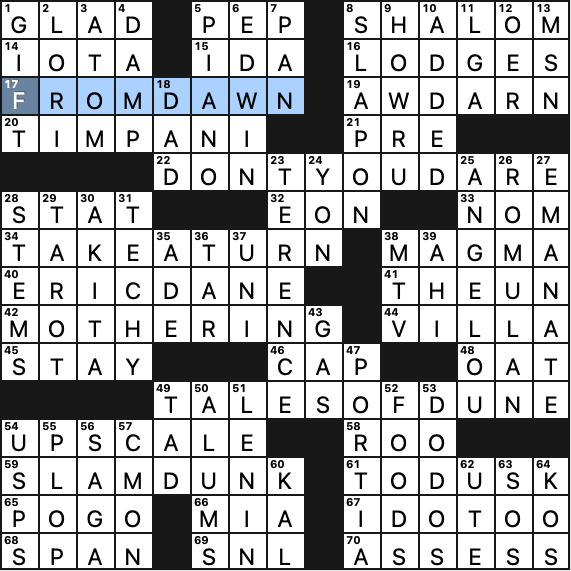 I don’t mind a good word ladder, and this is a good one. Using the revealer as both beginning and end of the ladder is a nice touch I don’t think I’ve seen before.

Another crazy feature of this grid is the up/down symmetry. With a revealer entry broken into 8- and 6-letter entries, and with every theme answer being an even number of letters, this configuration may have been the only way to have any sort of symmetry at all, and still have a 15×15 grid.

The solve just had a different vibe with the unusual symmetry even though (to be fully honest) I didn’t realize why at the time. But there’s good flow and some lovely long entries to enjoy such as: TAKE A TURN, MOTHERING, TIMPANI, Maya ANGELOU, ROMULAN, SHALOM, and UPSCALE.

Clue of note: 42a. [Looking after with affection]. MOTHERING. We also would have accepted [___ Sunday, British day to honor a certain parent].

All in all, a unique but fun and flowing grid. Very nice. Four stars.

Theme: Each theme answer is a Down answer and includes a synonym for standard as the last word. 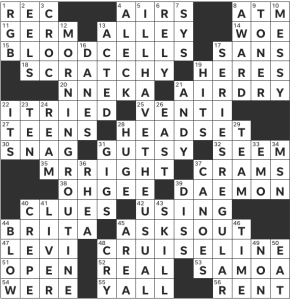 Seeing I’LL HAVE THE USUAL span down the grid was such a fun moment for me. Plus, I’m such a creature of habit, so I resonated deeply with this theme of regularity. All three themers fell smoothly into place, and I clocked one of my fastest solving times for a USA Today puzzle.

This grid was asymmetric, allowing for the different theme answer lengths. There was also so much good non-theme fill, from the biologically-oriented 11a [“Microbe”] GERM and 15a [Leukocyte and platelets”] BLOOD CELLS. There was also a nice flavor of experience with office printers – we’ve all been there, right? – where you can’t find a fresh REAM of paper or you get an error message saying that the TONER is out.

That’s all from me for today! Definitely a great puzzle! 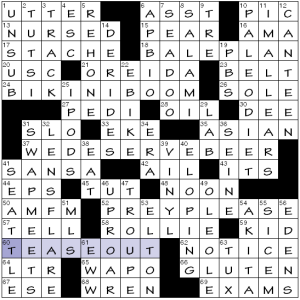 Apologies for the tardy posting. Terse write-up follows; no fault of the constructors.

A fun little theme, well done. The other fill is also good and well-clued.