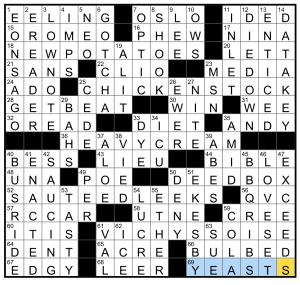 Today’s theme: VICHYSSOISE, which you make by combining…

Wow, was this hard or what.  Aside from the fact that it’s an oversized grid, there was a lot here that I just couldn’t parse — EONS AGO, BBQ RIBS, LOVE SET, BUS RIDE, GET BEAT, DEED BOX — couldn’t see any of them.  I was fortunate enough that VICHYSSOISE was randomly on my mind today, as Mali Handa was guest blogging for Rex today and started a soup discussion in the comments section.  And then we get a VICHYSSOISE puzzle from the NYT the next day?  Really odd coincidence.

Slacking: BULBED — yuck, and yikes.  I wanted BULBAR instead — which is more of a medical term than anything else, and even that is a stretch.  But no, it’s BULBED.  What’s next?  BULBIC?  BULBIFICENT?

Sidetracking: OPTIC — Ok, so Bruce is an ophthalmologist.  So every time he puts something eye-related into a puzzle, it’s like a little Easter egg.   Which is a good segue into the internet’s most famous ophthalmologist, Dr. Glaucomflecken:

Theme: U-TURN (39a, [One of four required to solve this puzzle]). Four theme answers are in two parts each where the solver must make a U-TURN into an adjacent entry to find the end. 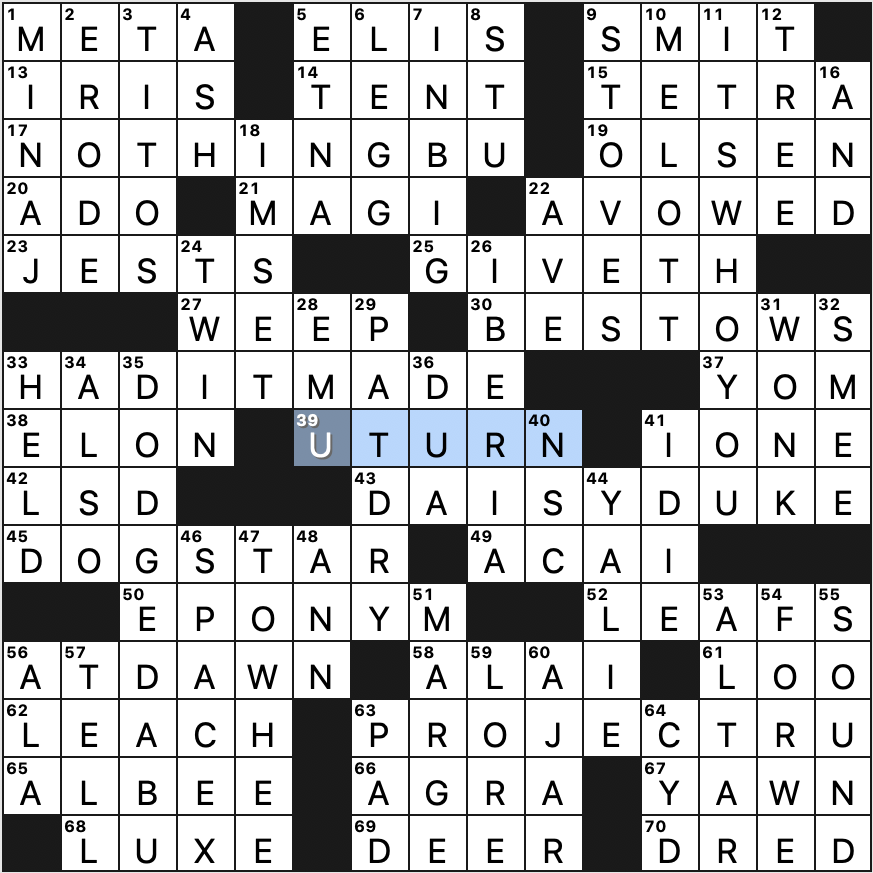 Fun theme! Unfortunately for me I was trying to solve the puzzle while sitting in an airport and trying to listen to an online class at the same time, so I didn’t get the full appreciation of it, but I enjoyed my aha moment and piecing together all the theme answers.

There are some fun bits of fill as well, especially DAISY DUKE, HAD IT MADE, and DOGSTAR. But I definitely noticed some clunky fill which dragged things down, like SMIT, LEGG, I DIE, crossing proper names CYD and DRED, and especially awkward partial FOR WE.

I’m not going to run through the clues because I’m about to board my flight, but a number of cross references also tended to slow things down. I counted at least three, and it almost made me think they were thematic.

Love the theme. The fill had its plusses and minuses. 3.75 stars.

Edited to add: pannonica points out in the comments below that all the U-TURNs are made at the letter U and that those are the only U’s in the grid (other than in the revealer). This ups my already high consideration of the theme tremendously. Consider that the constructor has to find phrases that can make a U-TURN but now they can only make it at a letter U, and the letters after the U must spell a clueable crossword entry (backwards), AND it has to be possible to stack that entry with the main entry. A lot of requirements there! So yes, I’m upgrading my rating to 4.25 stars.

Very quickly because life ran away with me this week: the Fireball ends the year in a blaze of glory, sort of. I enjoyed the puzzle until I got totally stuck in one corner because I was convinced of something I was wrong about. That’s not Alex or Peter’s fault and it is quite the construction.

There are rebi scattered around the puzzle. I’m not going to go through all the theme answers because my typing fingers would get tired. Here’s the grid: 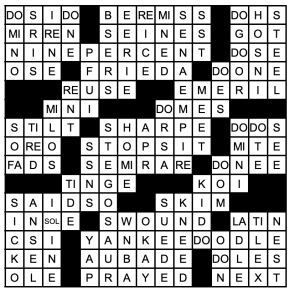 The rebi are DO RE MI FA SOL LA TI, which we all know from “The Sound of Music” are the notes of the scale. I’m not a solfege singer so I didn’t go through and confirm that the pattern in the grid gives us the tune to YANKEE DOODLE. I trust Peter and Alex so I’m sure that it does since 57a says that’s the [Song melodically hidden in this puzzle]. I had no idea what was going on before that – I found {DO}{MI}NI at 33d and hadn’t made the solfege connection yet. Once I knew what was up, that helped me fill in the rest of the puzzle. When I ran into a word that didn’t fit the space, I figured out which note to sing and there we were.

The sticking point for me was 26d [Woody’s director in “The People vs Larry Flynt.” I was sure it was OLIVER Stone and of course there are no musical notes in OLIVER. Turns out he produced the television movie. {MI}{LO}S Forman directed it.

What I didn’t know before I did this puzzle: well, that MILOS Forman directed “The People vs. Larry Flynt.” Also did not know that the Lyrids meteor shower occurs in APR.

Theme: Each theme answer contains a carb within it. 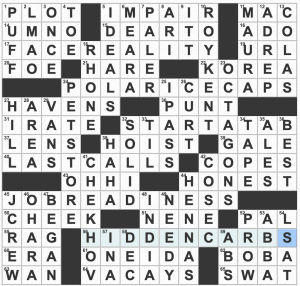 Cute theme, although I think I would have appreciated it more if I knew the phrase HIDDEN CARBS before solving this puzzle! The hidden words “cereal” and “bread” are impressive to me given how long each of those words are. Is there a way that Universal could still give solvers hints about the theme but not use such wordy clues? I’ve given up on them ever having circles, but maybe the revealer clue could be the wordy one…. I’m not sure, but the way it is right now means that I just avoid reading the theme clues at all.

Fave fill: ROY KENT (“He’s here! He’s there! He’s every-f***ing-where!”) and LMAO, just because I was once told that it was “too edgy” for Universal so I’m glad to see times changing.

Fave clues: 39a [That really blows!] for GALE, 12d [Pro who hardly has a spotless record?] for AD REP, 24d [Place to buy collars and leashes] for PET STORE 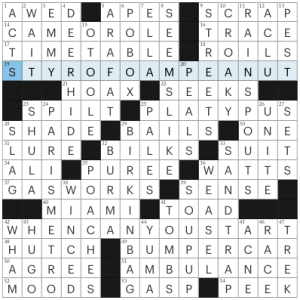 Smooth and easy, quick and breezy. I typically complete the Thursday themeless faster than all Tuesday NYTs. Some of that I attribute to the PuzzleMe interface, which I have set to jump me to the next incomplete entry. For any speed solver, such things make a big difference!

Fave fill: CAMEO ROLE (been gorging on MCU movies and enjoy the Stan Lee cameos), STYROFOAM PEANUT, PLATYPUS, “WHEN CAN YOU START?”, BUMPER CAR, PARIS METRO, BIRKIN BAG (I know of the bag but have no idea who Birkin was), SAND TRAP. 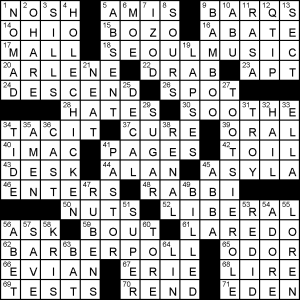 We’re heading into another round of rolling blackouts, so I’ll be quick. Dr. Ed Sessa gives us four phrases where ?əʊl heterograph pairs are swapped, creating droll phrases:

Quick one today with a fun theme! 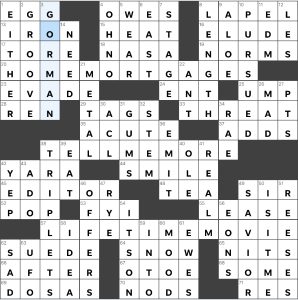 While not everyone pays a HOMEMORTGAGUE, they all well-known and filled right in for me. TELLMEMORE was easy fill for me today—the cluing was perfectly emphatic that I got it right away. For the third though, I had the last word but it took me a few crossings to get the first half of LIFETIMEMOVIE. An intreguging set that shares this theme commonality!

Loved the smooth solve and great fill, just what I needed for a Thursday! 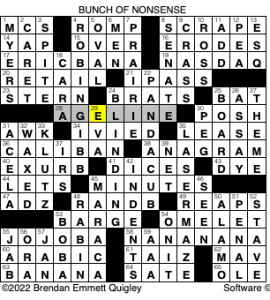 Revealer: 63a [“Fruit commonly split in some sundaes, and split three times in this puzzle”] BANANA

How fun was this? I loved that the theme answers put together with the black square in between became grid spanners. The revealer was also a huge help in JOJOBA NANANA and ANAGRAM for me, since I was entirely off with 36a to start. Really, there was just a lot of great wordplay in this grid, from the inclusion of ANAGRAM to 8d [“House mate?”] SENATE. It was also fun seeing a theme puzzle have the meta inclusion of THEME in 27d [“Linking element in a crossword”].