Holy crap. This puzzle was amazing! To make a themeless so smooth and full of fun, lively fill that you don’t mind at all that there’s no theme? Incredible. Wowwwwww. Absolute kudos to the constructor! In lieu of a theme, I’m going to list all the entries that matched how I felt about the puzzle: 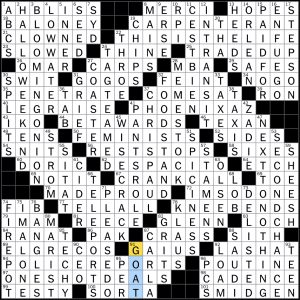 Also, that central stack of entries was mindblowing! BET AWARDS, FEMINISTS, REST STOPS, DESPACITO, and CRANK CALL?! The downs in that region were great too, including WISE CRACK, CHRIS PAUL, and MEME STOCK.

Other fun entries / fun clues:
– 19A CARPENTER ANT [One might crawl out of the woodwork]
– 41A PHOENIX AZ [Largest U.S. state capital by population, on a postmark]
– 96A POUTINE [Quebecois dish of French fries, cheese curds and gravy]
– 2D HALLOWEEKEND [Portmanteau for an extended autumn celebration]
– 3D BLOOMING ONION [Fried appetizer that resembles a blossom]

The only clue I didn’t love was [Joint accounts?] for POLICE REPORTS at 94A. There are too many people locked up with lives ruined for minor infractions for drugs that are now legal to really joke around about this, IMO. Also, can we talk about how relatively clean this grid was for how much it accomplished? Sure, there’s STROM and PAK, but I’ll take those little bits of glue for everything we got! I hope you enjoyed the puzzle as much as I did – stop by the comments section to let us know your favorite bits. Have a great week! 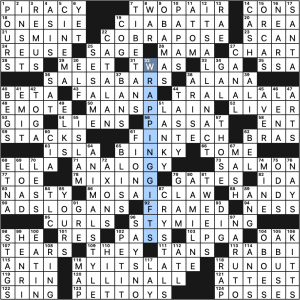 Whew! A lot going on here even though the solve felt pretty straightforward. I had to get down to the third or fourth theme answer before I began to realize what was going on, and I didn’t bother with figuring out the “first letter” business until after the solve. But yeah. A rather involved construction but plenty of fun, surprising finds.

My first thought on grokking the theme was that I wanted the theme answers to all be “gifts” somehow, since they get “wrapped”. I don’t know what “gift answers” actually would be though—perhaps actual things people might give like a BARBIE DOLL or a SCENTED CANDLE. Or a non-tangible talents like SINGING or INTELLIGENCE. But then you’d most likely end up with nonsensical entries on the right and left side of the grid and it wouldn’t be as satisfying.

I eventually decided to look on each theme entry as a gift in itself to the solver, i.e. we gained the knowledge that HAN DYNASTY can be broken down into HANDY and NASTY, for example. That’s a pretty good gift, ain’t it?

And if all that wasn’t enough, there’s a load of goodies in the fill. Just look at those stacks at top and bottom: TWO PAIR, CIABATTA, COBRA POSE and “MY IT’S LATE,” ALL IN ALL, and PET TOYS. Plus there’s SALSA BARS, TIBETANS, CATALAN, MANSPLAIN, IT’S ALL AN ACT, In-N-Out’s ANIMAL STYLE (for us West Coaster’s only, so nyah!), CRYSTALS, and AD SLOGANS. Oh, by the way, ANIMAL STYLE means a burger or fries topped with all the fixin’s, including caramelized onion and special sauce.

There were a couple new-to-me terms in the grid. The first is MOSAIC LAW [It includes the Ten Commandments], which I hesitated to type in. Does the art style actually come from the name Moses? I’d also never heard the term FINTECH [Crypto’s field] though it makes sense.

Get this: This lovely grid with its multi-layered theme and strong fill is a debut! This is going to be a tough act to follow, but I’m looking forward to more from this constructor. 4.25 stars.

Theme: The word CROSS is split between the beginning and end of each theme answer 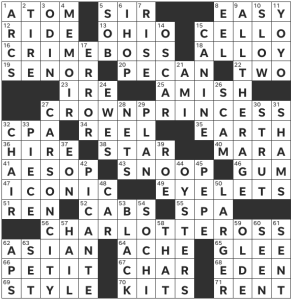 I really enjoyed this theme. It was relatively straightforward and didn’t affect my fill, though perhaps I should have paid more attention since CHARLOTTE ROSS came together entirely on crosses for me, save for the first T crossing THAT. CROWN PRINCESS fell neatly into place, but I also needed some help with CRIME BOSS, associating “racket” with sports more than with the criminal aspect of it. Maybe I should’ve been thinking more SNOOPing, SCAMs, and SHAMS, and that would’ve fallen in more quickly.

This was a really smooth puzzle, and I finished moving from top to bottom without a second go-through. I really liked ALL THE RAGE as helpful going down and providing some aid with 18a [“Brass or pewter”] ALLOY, 35a [“Our home”] EARTH, and 25a [“People in ‘Inside the Simple Life’”] AMISH. 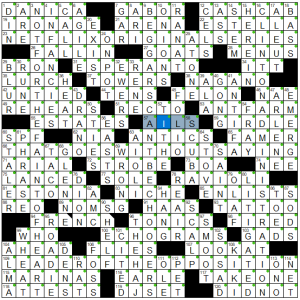 My computer crashed before I had saved my initial write-up, so today is going to be a bit quick, unfortunately. Six grid-spanners structure the themeless grid — I quite like NETFLIX ORIGINAL SERIES and THAT GOES WITHOUT SAYING — all while making space and flexibility for a pretty low word count, as 21x’s go, no? I know Evan doesn’t care much about word count, but my personal preference is almost always toward low-count themeless grids.