Theme: GIFT wrapping- each of the theme answers begins with something used to wrap a present. 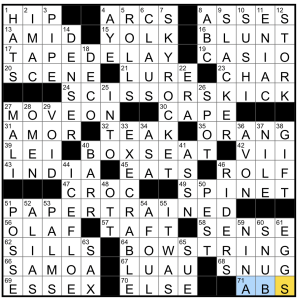 Happy holidays everyone! I’m on the east coast for the next two weeks, which means waiting all the way until 6pm for the Monday puzzle to come out, can you imagine?! Anyways, today’s puzzle is an appropriately festive one for the start of the holiday week. I like the concept of the theme a lot, and all the important pieces of gift wrapping are here. The theme answers are all solid phrases and generally disguised the gift-related word well. Even knowing the theme, it took me a while to come up with PAPER TRAINED – I really wanted “housebroken” or something like that.

It was a little off putting to have GIFT randomly sitting on the side of the grid like that instead of in a corner. I understand why it’s there, given the density of the thematic material and the need for a revealer, but it was odd to see it halfway through the solve and took away from the aha moment for me.

The puzzle overall played harder than the usual Monday for me. I made a lot of mistakes in the top half of the puzzle, wanting [Dodos] to be “dolts” instead of ASSES, [With it] to be “sane” instead of HIP, and 16a [Not sharp, as a pencil or knife] to be “dull” instead of BLUNT (Imagine how much trouble I would have been in if those answers were actually the right length!). AMOR clued as the Roman love god, ROLF, ORANG, and especially the CASIO/ENIAC cross also seemed potentially rough. Maybe the fill would have been better if BOX SEAT had been ditched and there were only four theme answers?

Theme: AFTERSHOCK (59a, [Tremor following a quake, and where the last words of the starred answers can be found]). Theme answers are familiar phrases whose final words can follow “shock” to form other familiar phrases. 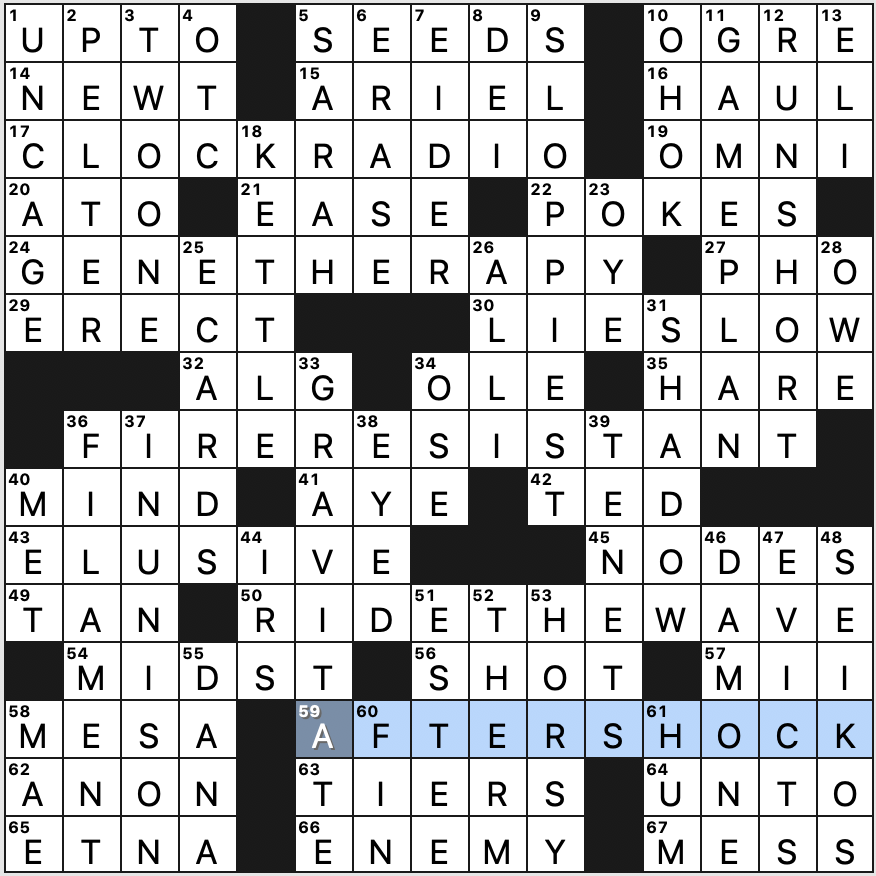 Solid theme. While the one entry was initially discomforting, I am glad I looked it up and learned a little more about the treatment.

Fill highlights include GAME PLAN, RUN SHORT, FILAMENT, and GRAVITATE. I wasn’t too keen on that PELTER / TWO-ONE stack in the NW, but it was quickly gotten past, and the rest of the grid held up.

Clue of note: 26d. [“___ Want for Christmas Is You”]. ALL I. Oh, good grief. Don’t we hear this song enough these days and now it’s in our puzzles too? Today I learned that Mariah Carey also wrote the song in addition to providing the vocals. I guess I had thought it was an older song since it has that 60s Motown girl-group vibe and that Carey just did a popular cover of it. But all credit to her for basically writing an instant standard. I’m assuming it’s okay to be impressed by the song even while hating it for its sheer ubiquity.

Solid puzzle. Nothing too flashy, but it does the job. 3.5 stars. 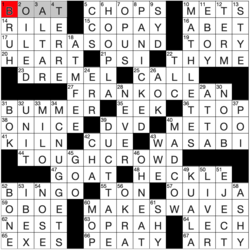 Let’s start at the revealer at 60A [Causes a ruckus, and what the end of each answer to the starred clues does], which is MAKES WAVES. That is, the second part of each theme answer is a thing that “makes waves”:

I found a couple of entries in this puzzle to be not right for a Monday: IBEX (well-known crosswordese, but maybe not so familiar to a beginning solver), LECH Walesa (a name I will agree is quite important in Cold War history, but are we all good enough at Cold War history to make it Monday territory?), and especially DREMEL [Multiuse tool with lots of attachments]. I had to carefully check all of my crossings on that one — I don’t believe I’ve ever seen it before in 20+ years of solving, and not in real life either. Turns out it’s not just a tool, it’s a brand of tool. Perhaps this is simply exposing me as the opposite of a handy person, but I found it a real needle scratch for a Monday. 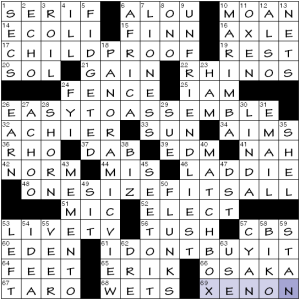 An easy, smooth-flowing offering. An okay theme, but I remind readers that it’s difficult to come up with amazing themes on a regular basis. As such, this crossword is much more than adequate.

(I mean that literally and not figuratively.)

Nothing too exciting in the ballast fill, but I’m contractually obligated* to take a spin through it:

*I am in fact not contractually obligated to do any such thing. 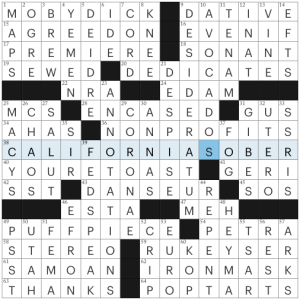 Easier than I expected for a Monday TNY. For you, too?

I gather that CALIFORNIA SOBER, with the great clue [High and dry?], re(e)fers to people who don’t drink alcohol, but do smoke pot.

Less keen on bits like SONANT, -IDE, CORONAE, plural ANNAS, IN AT, and EFTS.

Literary clues of the day: 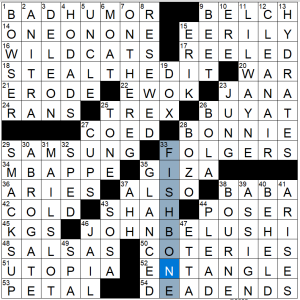