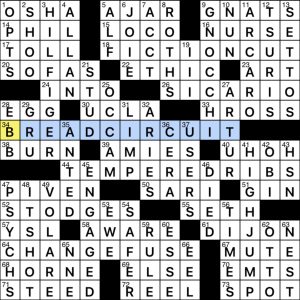 Hello lovelies and Happy Holidays! This week’s Jonesin’ features words that can follow “short,” paired into some strange phrases.

Today’s theme consists of familiar phrases whose final words can also be part of a burger. 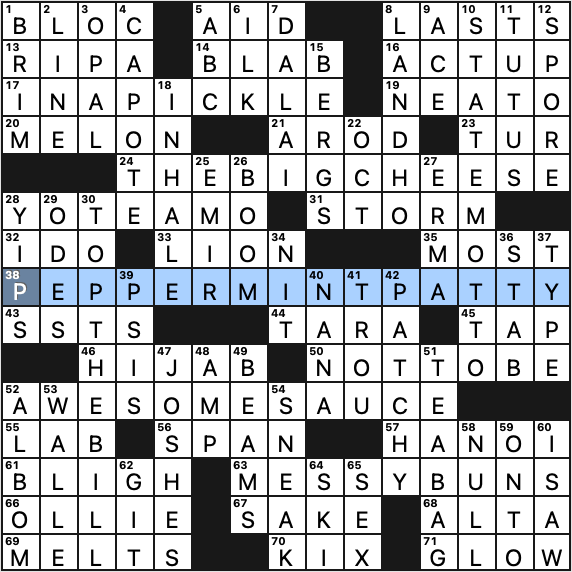 Nice. I like that the items are roughly in the proper order. Of course you’d need a bun on top and bottom to do it right, and I’d be one for putting sauce on the top bun, but the essential elements are there. I also like that there’s no meat called out, so you can have whatever kind of patty you want.

STATE MOTTO is nice in the fill, and I guess TOP THE BILL is as well, though I’m more accustomed to hearing it as “getting top billing.” I’m going to continue to hate on SSTS even though they’re making a comeback. And I had never heard of the journalist Katy TUR, but the crossings were fair. 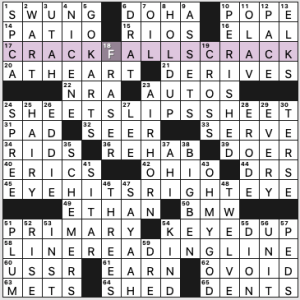 Sort of a rebus-puzzle theme featuring “[verb] between the [nouns]” phrases:

Fun theme. Rather bendy for a Tuesday puzzle, though.

Celine DION is in the puzzle (55d. [Celine with five Grammys]). You may have seen the news last week that she’s suffering from a progressive neurological condition known as stiff person syndrome.

The grid’s a bit crowded with 60 theme squares, producing tough-for-Tuesday-newbies fill like NICENE, double-A SAY AAH (usually we see SAY AH, which probably has no more validity than the AAH spelling), SEER, SPCA. 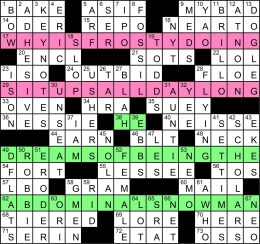 Hello there, everyone! I hope you all are doing well during this holiday season, and given the cold weather that has ben taken a grip on most of the country and will continue to do this coming weekend, here is hoping you are all staying as warm as possible!

The holidays is also a time to be on the lookout for one of Liz’s trademark holiday-themed puzzles, and this one doesn’t disappoint…unless you hate puns like the one featured in all of the theme entries.

We have a two-letter entry smack dab in the middle of the grid, which is a 16×15 grid, a few things altered from standard grid norms to execute the theme. Definitely don’t mind it. Not sure if there was any intent to have the anagrams of NESSIE (36A: [Loch legend, affectionately]) and NEISSE on the same line, but that was a trip to notice upon finishing the puzzle and looking at the grid afterward (40A: [German border river]). Also have a nice pair of 8-letter pairings in the northwest and southeast, with KEYNOTES being the highlight for me with those entries (3D: [Important convention speeches]).

“Sports will make you smarter” moment of the day: G-MEN (58D: [Fed. agents]) – Not sure if it is was because of ESPN broadcaster Chris Berman referencing the James Cagney movie a number of times when doing New York Giants highlights or otherwise, but one of the common nicknames of the New York Football Giants is the “G-Men.” The 2022 edition of the G-Men are looking to make their first playoff appearance since 2016, and after their win over the Washington Commanders on Sunday night, the 8-5-1 Giants have a good chance to break their playoff drought. 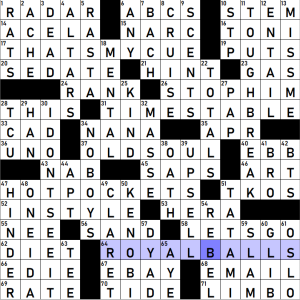 Theme: You might have initially expected to find accessories at a swimming pool party, but we’re actually dealing with pool, the game, otherwise known as billiards. The right side of each theme answer contains something you’d find in a pool hall:

As someone who spent plenty of time playing pool growing up, I really enjoyed this theme. It’s clean, consistent, and tight — you won’t find many other items at a pool table except the rack (also called the triangle) and chalk.

Great fill all around with lively bonuses, TOUGH BREAK and I DON’T SEE IT. The cluing is playful in this one, too, and these were some I enjoyed:

Thanks for the fun puzzle, Trent!

I didn’t notice the byline until I started to write this and now I know why the fill is fresh and smooth. Even with the revealer it took me a minute to figure out the theme, which is pretty cute for a Tuesday.

The theme clues have asterisks. 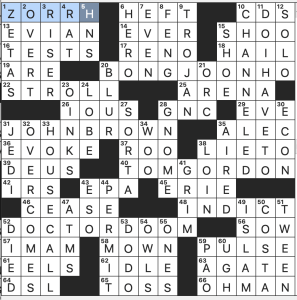 And the revealer: What one might say after figuring out what the answers to the starred clues have in common?] is OH MAN. The only vowel in each man’s name is O. Let’s stand back and admire this for a minute. It’s a Tuesday-accessible theme which is symmetrical, solid, and consistent. There are six theme answers counting the revealer, which is a lot of material to pack into a 15×15 puzzle and the fill does not suffer even a tiny little bit. Erik has demonstrated that a puzzle does not need to be head-crackingly difficult in order to be an example of excellent construction. Of course he has. 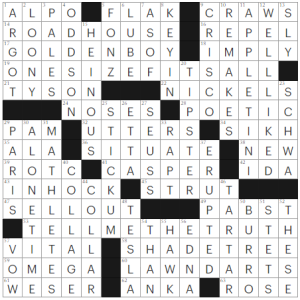 Was occupied this morning, so it’s an early-afternoon write-up.

This was an exceptionally smooth crossword and felt much easier than the advertised ‘moderately challenging’ rating. There were no appreciable obstacles or pauses during the solve.