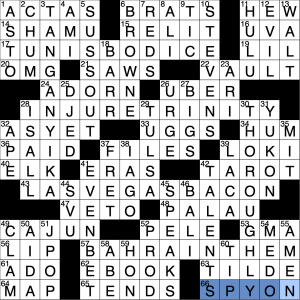 hello and welcome to episode #759 of matt gaffney’s weekly crossword contest, “Bright Idea”. i’m happy to be back in the saddle this week, but massive thanks to pannonica for filling in last week when my computer quite suddenly met its demise. anyway, for this week 3 puzzle, the instructions tell us we’re looking for a 7-letter word. what are the theme answers? there are four goofy long across answers:

so what’s going on? i really don’t know. let’s see if we can work it out together (and by “together”, i mean individually, and by “we”, i mean “i”. but the thought of you, dear reader, is there with me, and i thank you for your moral support).

it’s a bit curious that we’re looking for a 7-letter entry, considering there are only these four theme answers. so we’re not doing something as straightforward as getting one (or two) letters from each themer. the themers themselves seem to have nothing in particular in common—three out of four have two words; three out of four start with a geographical location. none of them have anything overtly to do with the puzzle’s title. maybe “bright” + LAS VEGAS suggests neon, but that’s pretty weak, and it only applies to that one.

if the themers are not being used semantically, that suggests that we look at them lexicographically, i.e. for their letter content. TUNIS is an anagram of UNITS, and LAS VEGAS anagrams to SALVAGES. those are interesting, but BAHRAIN and INJURE don’t anagram to anything. if there are hidden words or names contained in the themers, i’m not seeing them. similarly, i don’t see how it would be change-a-letter or add-a-letter (though THEM -> THEME is intriguing).

it’s a little soon to be at a dead end. maybe dead end isn’t even the right metaphor, as that would imply that i’ve actually chosen a street to go down; here, i still feel like the car is not yet even in gear. but in the absence of any clear indications of what the first step might be, we could at least think about what the later steps might be. are there more than these four theme entries in the grid? almost certainly. it’s a 78-word grid, and while 13 13 11 11 is a slightly unwieldy set of theme lengths, i strongly suspect that a constructor with matt’s chops would produce a more ambitious grid with a lower word count and more flow if those were the only thematic constraints.

i’m also wondering how we’re going to end up with a 7-letter answer. the theme mechanism might start lexicographically, but at some point it seems likely that there will be a semantic step, where we are going to have to submit a 7-letter word that describes what is going on, rather than extracting one letter at a time. it’s not impossible, though; it would just mean that we’re not going to extract the same number of letters from each themer, and it’s still unclear to me how that would work.

okay. if it’s not anagrams and it’s not hiddens, what about hidden anagrams? that’s vastly less constrained, so it would have to be hidden anagrams of words relating somehow to the title. what could the title be hinting at? lights are bright. i guess stars, or specifically the sun, are bright; LAS VEGAS contains VEGA but i’m not seeing others. bright could mean smart, but i’m not seeing anything smart either.

what about the fill? if there are other hidden theme answers in the grid, maybe weird-looking entries like {Cultural rival of NY, NY} LA CA (los angeles, california) are either theme or constrained by theme. i don’t see what to do with it, but i suspect something around here is important.

overall, the grid has fewer E’s and more U’s than you would expect. is that relevant? i really don’t know. it feels like it might be, but again, i don’t see how.

hrm. this one went nowhere for me, unfortunately. i feel like i never even got to the first step, which happens to me sometimes on week 4 puzzles but not usually on week 3s. oh well. somebody will have to let me know in the comments what bright ideas i was supposed to have had.