Three Across entries have no clues and are therefore UTTERLY CLUELESS (57a, [Lost, like three answers in this puzzle, literally and figuratively]). It turns out those answers are synonyms for UTTERLY CLUELESS as well. As a bonus, we find SENSE at 64a [This puzzle might not make it at first]. 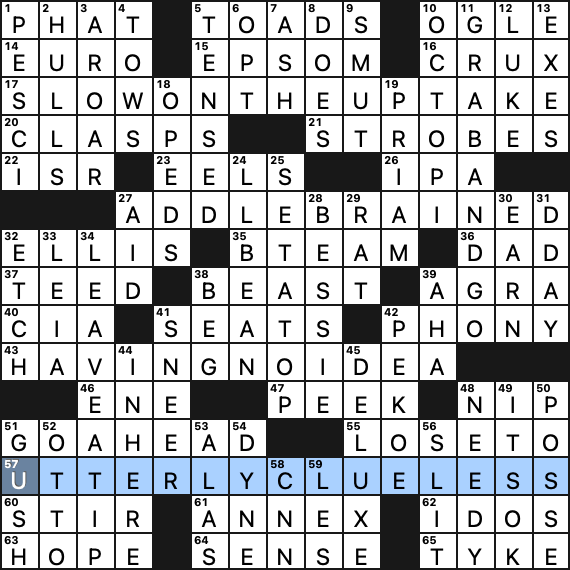 My first thought was that there was some error in puzzle production once again at the WSJ. Occasionally we get a grid that’s lacking Down clues after a certain number, so I thought something similar was going on today. I stopped mid-solve to go check the PDF from their website just to be sure, but everything there was the same as in the PUZ version, so I kept going hoping things would make SENSE in the end.

And they did. The meta revealer provided a nice AHA moment and made the earlier struggles worth it. Well done!

I enjoyed GRAB-AND-GO and LEAVE A TIP in the fill as well as “GO AHEAD,” “IN HERE,” and OCTOPI. And there’s nary a piece of clunky fill in the grid. Quite smooth all around.

Nice puzzle that made you work for that AHA moment. Four stars. 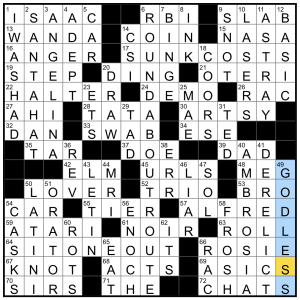 You can take your CAR to one of three “exits” in each roundabout, to yield the following:

Very interesting puzzle, particularly the way perspective makes some of these answers look like gibberish at first (i.e., 26A as RAC, because the CAR is driving from east to west).  But once it clicks, the direction the theme entries take is quite intuitive.  The fill was otherwise clean and the puzzle didn’t take too long to get through.  On a personal note, the breeziness of the puzzle stands in stark contrast to some of the more mind-bending roundabouts I’ve had to traverse — there’s a particularly lawless traffic circle in Tangier that still haunts my dreams.

How bad could it be?

Cracking: SANTA HAT — it’s the reason for the season!

Slacking: I WAS HAD  — really want this to be either I’VE BEEN HAD or I WAS DUPED, though Google tells me that I WAS HAD is the more idiomatic turn.  Whatever you say!

Sidetracking: NOIR — I’ll take any opportunity to be reminded of Edward G. Robinson’s monologue on actuarial tables from Double Indemnity: 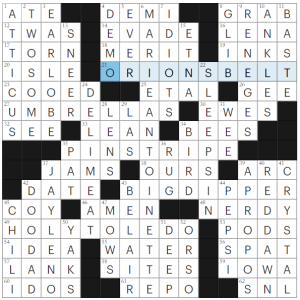 Another breezy Thursday themeless. The New Yorker crew does a terrific job at calibrating the difficulty level for the easy Thursday crossword–my solving times are almost always under 3 minutes on these. And they’re almost never under 3 for a Tuesday NYT!

A longer solve for me today but a fun one with an excellent theme! 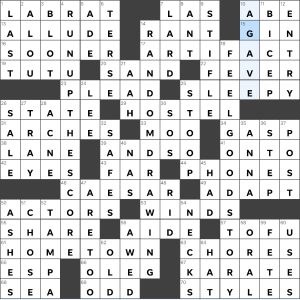 Theme: the word BOARD can be added to the end of the last word of each themer to make a new phrase

While it’s a good clue, it took me a few crossings before filling RUNUPTHESCORE. A RANDOMDRAWING is usually typical this time of year for white elephant parties or for secret Santas. Puppies and kitties are a common topic for a FEELGOODSTORY on the news. With today’s themer, we get: SCORE BOARD, DRAWING BOARD, and STORY BOARD.

The NW corner stumped me and was actually the final section that I filled in. Sometimes just enough isn’t clicking that a whole section is unfillable for a while, then there’s either a breakthrough and it trickles in or it’s a true stumper and becomes a did-not-finish—thankfully it got it today after all, though I had a sense of dread for a couple of minutes at the end. A great puzzle, and maybe you all had an easier time. Given that 2022 is wrapping up, and the holidays are upon us, it’s been extra busy and my brain sometimes only has so much to give. :D

Theme: The theme answers are all parts of a MITCH HEDBERG quote about THE ULTIMATE STOCKING STUFFER. 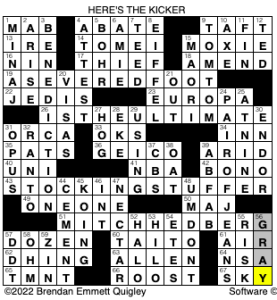 Revealer: 51a [“Stand-up comic who’s the source of the quip”] MITCH HEDBERG

I’ve definitely never been told that A SEVERED FOOT IS THE ULTIMATE STOCKING STUFFER, but there’s a first time for everything. It’s definitely appropriate for the season, and the title, “Here’s the kicker,” conjured up quite a hilarious image. It was also a nice quip in that it was pretty easy to discern once I had a few of the crosses, particularly in filling in SEVERED, which was crossed by BENEDICTION, VISAS, ATTEST, BOHR, AMIE, and TEED, all of which were more than fair. It took me a bit longer with ULTIMATE off of TOM TOM (I was a Garmin user) and AT NINE (I had NINE AM initially), but we got there.

Lots of really fun stuff in this grid. My buddy Josh ALLEN appeared in 63a [“Bills QB Josh”] and we got a double Star Wars reference in 22a [“Lightsaber builders”] JEDIS and 30d [“Forest moon with a Death Star shield generator”] ENDOR. I lean more on JEDI as the plural, but some dictionaries do accept JEDIS plural. 36a [“Insurance company with a spokesgecko”] made me giggle over GEICO, as it always does.

That’s all from me for today, but I had a great time with this. Not sure I’ll be taking the advice though. 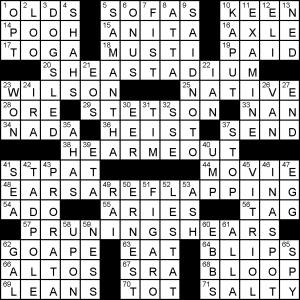 Freddie Cheng & Caroline Sommers’s theme concept is a little offbeat. PRUNINGSHEARS is the fourth long across answer, and it indicates that each of the previous three began with 4/6th of the letters of SHEARS: SHEA, HEAR, EARS. I think that’s it, right?
Deleted:   Added: