Theme answers are familiar phrases of the form X OR Y where both X and Y start with the same letter and can be clued (roughly) with the same phrase. 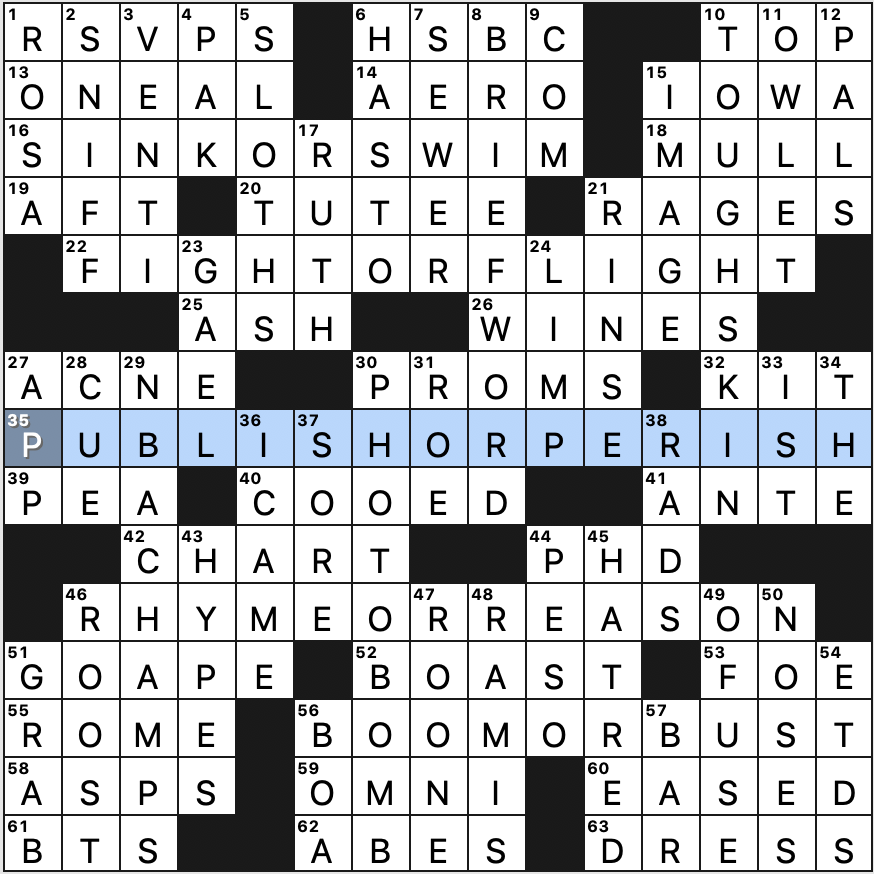 There’s no requirement for these phrases to have words with the same starting letters; that appears to be a constraint the constructor employed to help us solvers and to make the theme tighter—and I for one appreciated it.

Some of these were a little iffy, but on the whole, I enjoyed the theme as something just a little bit different than the usual. It’s not easy to clue two completely different words with the same clue (a la Schrödinger puzzles), so getting just close enough might be the best we could ask for.

As an exercise, can you come up with a clue that works for both words in some “or” phrases (regardless of whether they start with same letter)? How about “hit or miss,” “heads or tails,” or “rain or shine”? How’s this for “trick or treat”: [Something people like to take?]?

Nice long fill with BRIEF WORD, NBA CHAMPS, PHOTOBOMB, and TOUGH SKIN [Ability to endure criticism]. Not sure about that last one in the singular (“thick skin” sounds better), but the plural Toughskins brings back memories of my childhood Sears-purchased clothes. Anyone else? 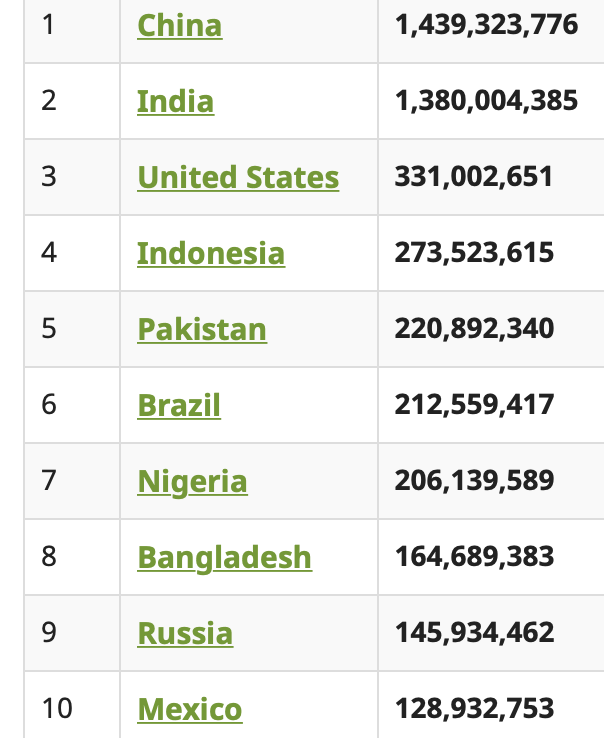 Nice puzzle. Four stars from me. 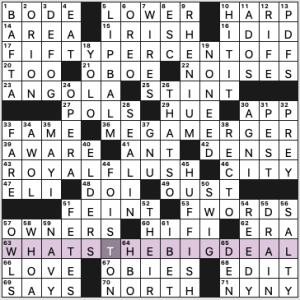 Interesting theme idea, and not one we’ve seen here and there before.

A friend up on Minnesota’s North Shore of Lake Superior took a solstice walk this evening in the woods, and saw Biboonkeonini through the trees. That’s what the Ojibwe/Chippewa peoples call the constellation you may know as ORION (2d. [Hunter visible at night]). Biboonkeonini is the Wintermaker. Keep your eyes peeled if the skies are clear.

Fave fill with a great clue: 53a. [“Fudge,” “fie” and “fiddlesticks” are some of the printable ones], F-WORDS. The Gray Lady may be afraid to use frickin’.

Never seen before: HUFFISH, clued as [Sulky]. Huffy, sure. Just me? 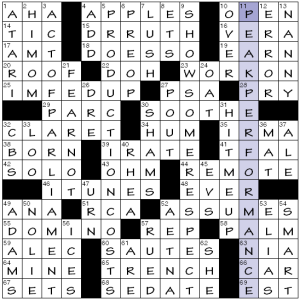 Act, production, show. Each is a synonym for performance, and all are on the ‘tops’ of their respective entries. I wasn’t initially enamored of the theme, but it’s grown on me as I’ve written about it. 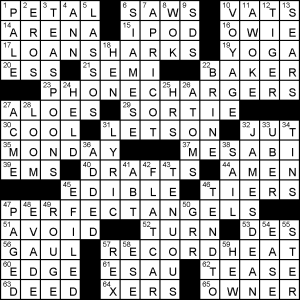 Susan Gelfand’s LA Times puzzle uses a well-trodden theme concept of phrases -two-part – ending in big 4 US men’s sports teams. The wrinkle this time is that all the originals are noun phrases, but they’re reinterpreted to be VERB+OBJECT. 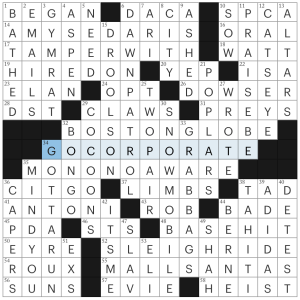 Good morning, besties! I love a center-stack layout, and here, Paolo gave us BOSTON GLOBE, GO CORPORATE, and MONO NO AWARE. That last one is a completely new term for me, so I needed every crossing. The clue ([Sell out]) for GO CORPORATE was delightfully subtle.

Other long answers I enjoyed– AMY SEDARIS, GOTTA RUN, and MALL SANTAS with that ingenious clue [Sitters hired for the holidays?]. PRAISE BE unfortunately will only remind me of “Handmaid’s Tale”– I kinda wish it had been clued with a reference to that show. Although I know some people don’t like to bring up Moss since she’s a scientologist.

Thanks Paolo, and Happy Hanukkah everyone!

Zhouqin Burnikel’s USA Today Crossword, “Can You Give Me Directions?” — Emily’s write-up

Another tricky one for me but I found my way in the end. How did you all fair? 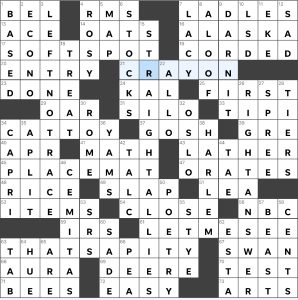 Theme: each themer starts with a directional word

A great set of themers that were also in the downs today, with LEFTNOTRACE on the left side, STRAIGHTALLIES in the middle, and RIGHTANSWER on the right side.

The western branch with PLACEMAT took me the most time to fill, since nothing in that area was easily filling for me. It just so happened that the cluing for the crossings didn’t click immediately so I slowly broke into that area, though I did finish.