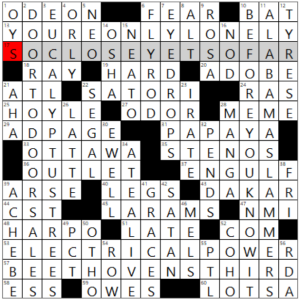 Nice framing in the grid, with four stacked pairs of 15s set inside the grid’s edges: “YOU’RE ONLY LONELY” (I checked out the YouTube of this song, which was a hit when I was in junior high but it doesn’t sound remotely familiar! I’ll take the Motels’ “Only the Lonely” instead), “SO CLOSE, (and) YET SO FAR,” (my ear wants that “and”), ELECTRICAL POWER, BEETHOVEN’S THIRD, DOOR-TO-DOOR SALES, EUCALYPTUS TREES, BEFORE YOU KNOW IT (my fave here), ALABAMA SLAMMERS. The octet of 15s don’t leave much space for other longish fill, do they?

55d. [Old televangelism org.], PTL. Praise the Lord! This was … Jim Bakker? Or Pat Robertson? Checking … yep, Jim and Tammy Faye Bakker’s show, on Robertson’s TV “network.” If you are under 45 years old, I would not expect you to have ever heard of this (unless you watched that Tammy Faye movie with Jessica Chastain, I’ll bet it comes up there).

ODEON, STENOS, OTHO, plural OYS? These are in the debit column for me. 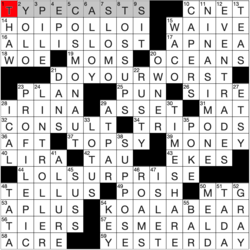 This puzzle started off a little slow — both in terms of how fast I moved and how much sparkle I thought the entries had — in the upper left corner: TYPECASTS, HOI POLLOI, and ALL IS LOST were all fine but not particularly “whee!” for me. Working counterclockwise around the puzzle, things quickly got both faster and more interesting: PROFILE PIC, LOL SURPRISE, NINA SIMONE, DO YOUR WORST. The SE corner in particular I found (a little too) easy, but the aforementioned long entries made up for the lack of a challenge. 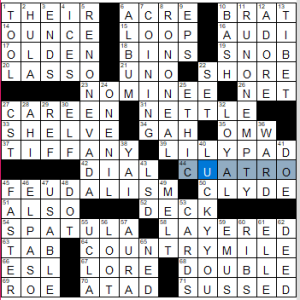 It took me a long while to find the theme in this asymmetrical grid, and it turns out there are two. We’ve got vertical themers containing the word “none” and horizontal themers have synonyms for “beef” (as in “argument”) at the beginning (or left end), and start on the left edge of the grid, to boot.

This is the second time this month I’ve seen a dual theme (and maybe I’ve missed a few). I’m a fan, and would like to see more. 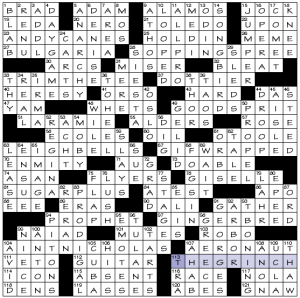 Letters have been dropped from Christmas-related phrases to wacky effect. Like a good little crossword solver I intended to jot down those missing letters to see if they spelled anything together. L+B, the revealer tells us to do so. (I still haven’t, so we’ll discover it together—unless you’ve already done so, which  is a distinct possibility since it’s so late in the day already.)

It’s C-H … , so obviously we’re going to spell out CHRISTMAS, as in the full title of How the Grinch Stole Christmas.

As a bonus, there is a trove of Christmas-related content in the regular fill and clues.

Abbreviated write-up because, as I’ve mentioned, it’s already late, and there’s the Newsday Stumper yet to do. 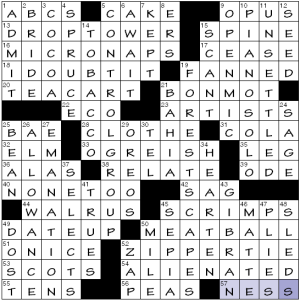 No timing for this one due to tardiness and unwillingness to be selfish by taking the full amount of time to solve it without looking some things up/checking entries.

But let’s just say that it was very tough.

Peeked at the comments prior, so I saw Seth’s and Stan’s dialogue regarding 5-across CAKE. Going to agree with Seth on that one.

Since I’m not doing a full write-up, the purpose of this is now to get the completed grid in front of your eyes with as much expedience as I can muster.

Suffice it to say that this was the usual mix of cleverness, tough/oblique (and a few opaque!) clues, and occasional huh? moments.

Please feel free to ruminate, commiserate, and otherwise opine in the comments!