Hi everyone – and Merry Christmas to those who celebrate! Today’s write up will be quick so I can get back to my Christmas Eve traditions with my husband. I hope you’re all well and have time to spend with those you love, too.

Today’s debut puzzle by our constructor re-imagines common phrases as general terms to describe books like the one listed for each clue. Pretty straightforward stuff, with a few fun surprises like ANIMAL PRINT and BUZZ WORDS. I was impressed by the volume of theme material and the fact that the constructor was able to build so many themers without reusing the second word! 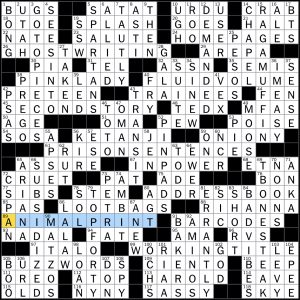 Random thoughts:
– 1A: BUGS [Nickname of Looney Tunes animator Ben Hardaway] – I enjoy answers like this that feel impossible to get at first glance, but then reveal themselves in a way where you just know that it’s correct.
– 56A: KETANJI [Justice ___ Brown Jackson] – Love seeing her in the puzzle!
– 3D: GO TO PIECES [Break down] – I was half convinced that this was originally meant to be a theme answer for some kind of novel centered on travel.
– 69D: T-BONE STEAK [Cut with a letter opener?] – Easily my favorite clue of the puzzle. This was a fun aha moment!

That’s all from me for now. Be well, take care, and happy holidays! Get those resolutions ready for 2023.

Merry Christmas, all! I am up well past my bedtime texting my wife who is working a 24-hour shift and family who are snowed in in Western New York. As a distraction, we’ve got a changeup from Evan Birnholz: a four-puzzle variety suite. 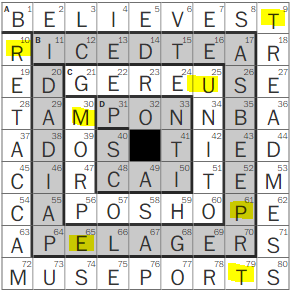 Instructions direct us to find six- or seven-letter gifts within the first three puzzles, and then to use the fourth puzzle to find a secret message from Santa. Each of these formats will be familiar to regular solvers of variety puzzles by Patrick Berry, Mike Shenk, and Joon Pahk — indeed, Evan thanks the first two in the puzzle suite itself.

Puzzle 1 is a Marching Bands, in which answers run clockwise in concentric rings as well as across the grid. The cluing is straightforward, as it is for much of the suite, but some letters are clued only by the Rows and not by the Bands. 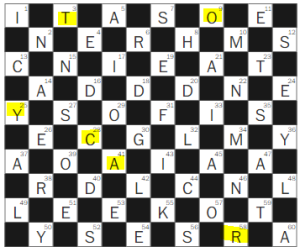 Highlighted in yellow in the image, the extra letters spell TRUMPET – an apt find in a “Marching Bands” puzzle.

I don’t think I’ve see a “Checkered Flag,” as in Puzzle 2 here, before, but the concept is familiar; clues zigzag across pairs of rows or columns, and thus intersecting words check each other in a different arrangement than a crossword, spiral, or Rows Garden. [Erie passageway] for CANAL struck me a bit odd syntactically (as opposed to something like [Niagara Frontier passageway] to clue ERIE CANAL)  but it’s a small nit.

The extra letters in this puzzle are present in the across answers, but not the downs, and spell TOY CAR, another apt answer for the puzzle format. 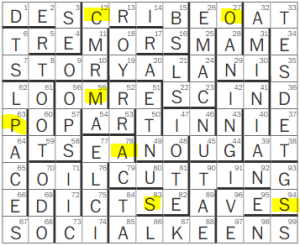 Puzzle 3 provides a bit more resistance — I only know the musical MAME from crosswords, tried to make “caramel” fit before NOUGAT for [Mars bar filling], and generally have more trouble with Labyrinths even before there are extra letters about.

Again in the Rows and not the other set of clues, the extra letters spell COMPASS, a useful tool for someone lost in a maze.

The last puzzle is titled “Gift Boxes;” I’ve also seen it as “Packing Crates” and any number of container-related phrases. As in the other puzzles, we have Rows clues helping to fill the grid left-to-right, but our other set of answers are grouped in rectangular shapes in the grid; it’s left to the solver to place them. 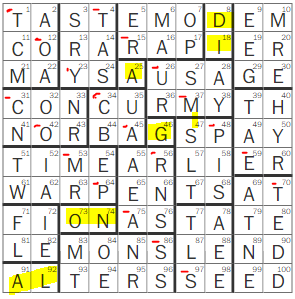 This is more of a challenge — and I would say more fun — if you solved this on paper or otherwise outside of the PuzzleMe applet on the Post’s website, which necessarily spoils the layout of the boxes. Anyway, it’s typical in this format for a bonus word to be leftover from letters not included in one of the boxes, and here we’re left with “DIAGONAL.” And indeed, TRUMPET, TOY CAR, and COMPASS are all in this grid on diagonals beginning at squares 4, 1, and 31 respectively.

If I weren’t writing this puzzle up, I would have stopped there and been a bit underwhelmed. The hidden gifts were so apparent from the first three puzzles that their inclusion in the last wasn’t a help toward anything but a nod that it can be done. However, the instructions for the fourth puzzle end with the line “The squares of each of these gifts will tell you where you can find Santa’s four-word message in the first three puzzles.”

Yada yada yada, IT’S A CHRISTMAS MIRACLE. Nope, just a lovely gift from Evan to us, four puzzles all with multiple triple-checked cells and a satisfying payoff that strikes a nice balance between hand-hold-y and completely obfuscated. Bravo.

Theme: Each theme answer contains OPEN split between two words, with the space between them being the “crack” of the puzzle’s title. 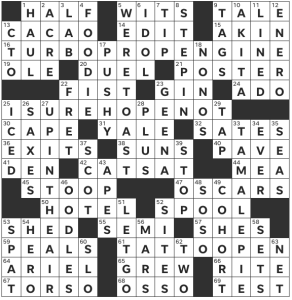 When I saw the puzzle’s title, I expected each themer to have OPEN as the letters framing the beginning and end of the answer, so it was not necessarily helpful when I couldn’t remember what a TURBOPROP ENGINE was. However, it soon became clear as I filled in I SURE HOPE NOT and TATTOO PEN.

I enjoyed the solve here, finishing in my usual five minutes-ish time. I was completely lost on the PROP part of TURBOPROP ENGINE, and it so it wasn’t until I got PUSHY and WE’RE TOAST (which, side note, I love) that it all fell into place. I also had SPAR at 20a [“Face off”] instead of DUEL for awhile, which did not help matters. 23a [“It’s replace by sparkling wine in a Negroni Sbagliato”] GIN because I believe that there’s a viral TikTok video with this drink at the center. The FOODIE in me is also definitely intrigued by TAMALE PIE and will do some post-holiday investigating upon my return home.

Other favourites included CATSAT, OODLES, STOOP, and PEALS. I had a hard time with CAPE bcause I first had COWL for 30a [“Part of a Scarlet Witch costume”] but I enjoyed the reference immensely.

That’s all from me! Happy holiday season to you and yours!

Happy Christmas (if that’s your thing)! We’ve got another meaty jumbo freestyle going on here, so let’s dig right in. 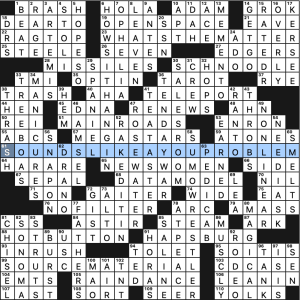 As usual, there’s a lot to like here, starting off with the central “SOUNDS LIKE A YOU PROBLEM.” No doubt this was the seed entry for this grid. I like it, though it’s completely new to me.

Just a few entries took a little bit of the shine off the grid. TEA TASTER [Worker who may sample Earl Grey] doesn’t sound like a real thing. Right next door is TEN-DAY WAR [Slovenian conflict that lasted less than a fortnight] which I’m sure is a real thing and it was easy enough to infer, but I’d never heard of it. Lastly, I’m pretty sure I’ve heard the phrase DATA MODEL [Abstract framework for information], but even after reading the clue multiple times, I still don’t know what it is.

It’s not a surprise that all those are in the center of the grid where we have a massive vortex of long entries. To have those as the only debits in such a huge mash-up of entries is really quite impressive. Yeah, I guess I’d say I’m in awe of that central section.

I did get hung up at the end in the SW. 93a [Arrival en masse] really looked to me like ONRUSH (who uses INRUSH?) and 81a [Web designer’s lang.] seemed like RSS (a web initialism with 38 hits at Cruciverb whereas CSS has 0 hits). So I couldn’t see 81d with its opaque clue [Tool that makes chips?]. It was only after much contemplation that I considered INRUSH which then led to CHISEL and CSS. To be fair, I do know what Cascading Style Sheets are and that RSS isn’t really a “lang.” But yeah, it was a tough corner.

Oh, one other thing. I haven’t figured out why “White Christmas” is in the title. If you’ve got a clue, please share it in the comments.