Merry Christmas! This week we’re looking for a word associated with Santa. There were five starred theme entries:

I scanned the themers and their clues, and nothing jumped out at me. I re-scanned the grid and noticed LAUGH at 9a (clued as “Sound from Saint Nick”), which had to be thematic. I thought “HO” would be a better answer, so I scanned the grid for HOs and didn’t find anything. I noticed ISTS and STS (while working a Saint/St. angle) so I searched for other STs in the grid. It turns out I had accidentally stumbled into part of the solution, but for the wrong reason. 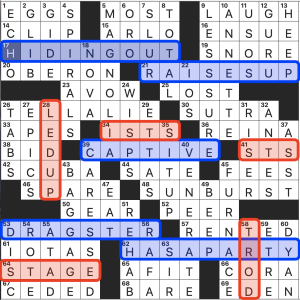 I slept on it and revisited “HO.” I checked the theme entry clues again and noticed they were all fairly vague. That’s a common meta mechanism that was recently used by Matt Gaffney’s excellent MGWCC meta last week. When you see consistently vague clues for theme entries: try to apply them elsewhere. DRAGSTER (“Souped-up car”) was my entry to the rabbit hole: I thought HOTROD would be a good alternate answer. I searched the grid for for HOT, found nothing, and then searched for ROD. I found TROD, which became HOTROD once I added a “HO.” The rest of the meta fell quickly:

The first letter of the original “HO” entries spell LISTS, our contest solution. Another fun meta by Mike, with a great “aha” moment. Readers: let me know how you made out, and if you managed to find Saint Nick.