Matt is swamped by family obligations, giving me a welcome chance to express my appreciation of the MMMM series. [Thanks, Hector! an appreciation echoed by me. Hector is a highly-skilled veteran meta-solver whose name many of you will recognize from solver lists over the years. –Matt G.]

The thirteenth puzzle of this otherwise monthly meta series is meant to tip off solvers to the mechanisms for the year’s Mega Meta and Red Herring. 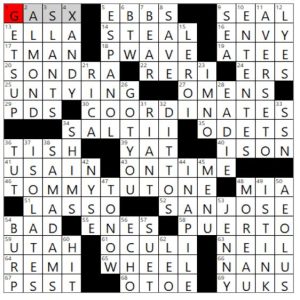 Both are numeric. The Red Herring was announced in January as a song from the 80s, and we are told here at 46A that it was sung by Tommy Tutone. The first seven puzzles contain clues indicating that the entry “rhymes with a number.” Assembling the numbers reveals the (1981) song to be “867-5309/Jenny,” the lyrics of which violated the norm prohibiting valid phone numbers in fictions, to the annoyance of numerous people not called Jenny.

Solvers of the Mega Meta have been on the lookout for a song from 1973, and the other apparent themer in this puzzle combines 4D and 30A with the clue, “what most numbers in the clues of this year’s puzzles represent,” to yield X AND Y COORDINATES (we’d already learned in November’s puzzle that the mechanism involves coordinates, so this actually added very little new information).

The clues specify column-row coordinates: columns in Across clues and rows in Downs. You have to ignore years and other numbers larger than the grid size, and also numbers that are spelled out (“five” or “fifth” instead of 5 or 5th; I might have gone with “numerals” rather than “numbers” in the 4D clue, because there are quite a lot of numbers that play no role in the mechanism). The puzzles supply one or two letters each, spelling STEALERS WHEEL HIT, which can only be “Stuck in the Middle With You,” written and sung by the same Gerry Rafferty who in 1978 gave us “Right Down the Line” – that Line presumably being in the Middle, where Gerry remained centrally adhered. Confirmation is hardly needed, but STEAL and WHEEL supply it.

I know I’m not the only solver once again feeling a combination of gratitude for Pete’s monthly gifts to us of these brilliant puzzles and dread that if this year’s series is the last, it will be right about now that we’ll hear about it. I hope that he is enjoying his holidays, with or without the company of clowns and jokers, as he prefers.

What are your thoughts about the Mega Meta and Red Herring, and about this year’s MMMM suite?