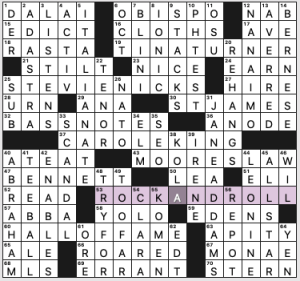 A pop culture trivia theme greets us for this Wednesday puzzle. There are three women who’ve been inducted twice into the ROCK AND ROLL / HALL OF FAME: STEVIE NICKS (solo and with Fleetwood Mac), CAROLE KING (solo and as half of a songwriting duo), and TINA TURNER (solo and as half of a duo, the other half being her abusive ex; ain’t it a shame she wasn’t recognized first for her solo career?). There are 20-some men who’ve been inducted twice.

Didn’t love all the fill, but nothing stumped me and I appreciated the focus on women in music. 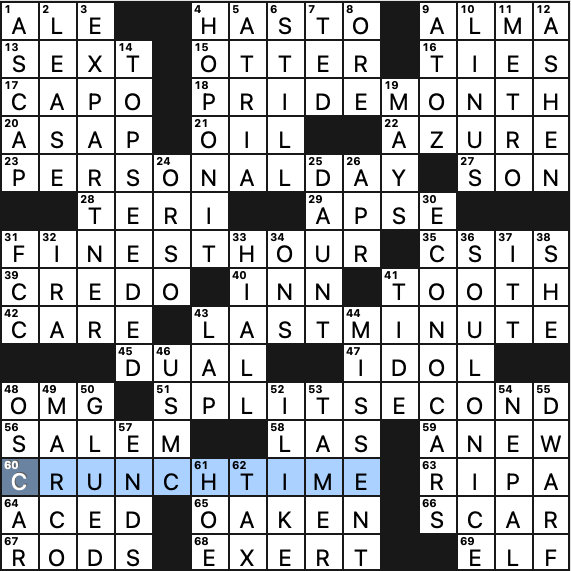 Welp, I have to say I found this confusing. These don’t all translate in exactly the same way, and I found myself going back and forth trying to find an easy way to explain it. I wanted there to be a consistent way of reducing the time (e.g. a year becomes a month, a month becomes day, a day becomes an hour, etc.), but that’s not possible when there’s the constraint of tying the other halves of the phrases together.

Still, it’s pretty impressive to have found all these pairs of phrases (clues and their answers) which roughly line up but for a reduction in time period. And then getting all these to fit symmetrically is another feat. Unfortunately I don’t think it translated into a fun time for the solver (at least not this one).

In the fill, SOUL ON ICE shines (though I didn’t know it) and I also liked TOP-SEEDED. I’m on the fence with ECONOCARS (do people actually use that term?), and I’m downright skeptical about “HOP ON IT” [“Get going already!”]; “Hop to it” sounds more familiar to my ear.

Clue of note: 17a. [Guitarist’s accessory]. CAPO. I’ve seen this occasionally in crosswords and never knew what it does. Today I do since I looked it up. It’s basically a clamp that goes across all the strings at a chosen fret thereby raising the pitch of the guitar.

Fun puzzle with great fill and and easier theme than first thought. 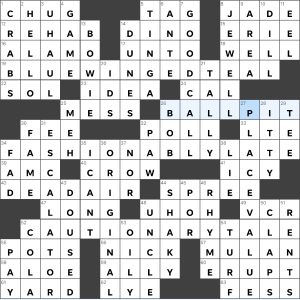 Theme: each themer ends in an anagram of “et al.”

At first, I tried mallard but BLUEWINGEDTEAL filled in quickly with a few crossings. Cluing for FASHIONABLYLATE was excellent, though had me misdirected to thinking about clothing instead of timing. The point of most fairytales are a CAUTIONARYTALE, meant to teach morales and warning listeners/readers about dangers. With the theme, we get the following themer endings: TEAL, LATE, and TALE.

Smooth solve today, though for some reason I got hung up in the NE corner. Cluing just didn’t quite click for me, though it wasn’t particularly difficult, other than the sports player I didn’t know but since it was all together, it was the last portion that I finished. 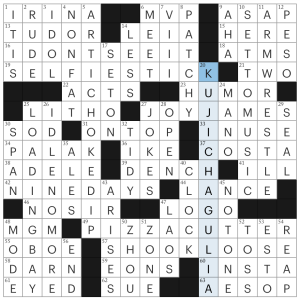 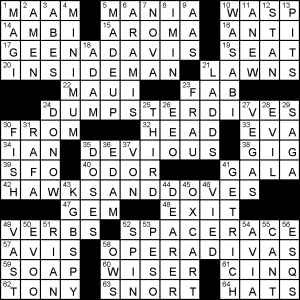 I’m not sure that [Sly, and a phonetic hint to the pattern in the last words of 17-, 24-, 42-, and 58-Across], DEVIOUS gets across what is going on in today’s theme, or at least I’m too thick to understand the hint. I get that each of four answers is D-VOWEL-V-VOWEL-S, but after that I’m lost. Anyway, the entries are: 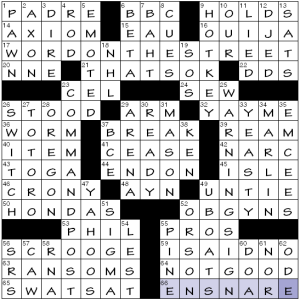 No write-up as yet. This is a post-facto post, as I was unable to do crosswords for a few days. I’ll try to drop in some more discussion (still) later on.