At first it seemed pretty clear what the theme was. The main theme answers all end with a type of golf club. 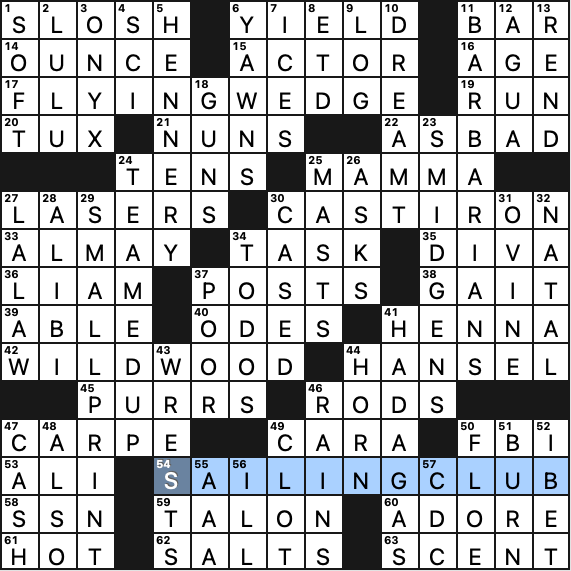 But then the revealer added a little more to the story: 54a, [Boat enthusiast’s group, or frustrated golfer’s projectile that appears three times in this puzzle] with the answer SAILING CLUB. This was unexpected. Yes, we get the golf clubs at the ends of the two-word phrases, but the first word can also describe that club as it’s been thrown through the air in anger. Pretty cool, huh? And it gives the puzzle title a whole new meaning, too. Nicely done!

But wait, there’s more! Lots of fun long fill in BARBARIANS, SMALL PRINT, SMIDGENS, TEAMED UP, and HENNERY. I’ve never heard this last word but I loved learning it. If you want fresh eggs, get thee to a HENNERY!

Not so excited about HAD A GAS [Really enjoyed oneself] which feels pretty dated. But “a gas” is probably a better thing to have than just “gas.”

An impressive, surprising theme and strong long fill. Four stars from me. 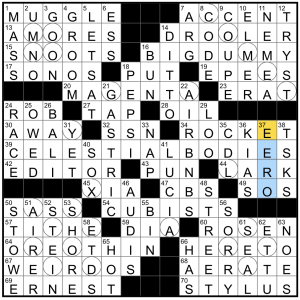 The theme is CELESTIAL BODIES, and the circled squares spell out a 2×2-square MOON, a COMET zooming off, a diamond-shaped STAR, a large ring for a GALAXY, and … an ASTEROID that zigs and zags? Either that’s a weird way to depict an asteroid or everything I know about asteroids is wrong.

I was surprised to encounter two related things that I didn’t know in a Wednesday puzzle: 17a. [Wireless speaker brand], SONOS and 37d. [Amazon-owned home Wi-Fi brand], EERO. I tried plunking in Amazon’s wireless smart speaker, ECHO, which slowed me down so much. I’d also never heard of EERO’s crossing, 44a. [“The Song of the ___” (Willa Cather novel)], LARK. Appears to be one of her three Great Plains novels, the other two much more familiar to me.

I suspect the physicians around these parts are looking askance at 21d. [Gut-related] as a clue for GASTRIC. Gastric relates to the stomach, while the gut is generally taken to refer to the intestines. The dictionary reveals that in common parlance, gut can also mean the stomach. I don’t like it and you can’t make me.

Today’s “verb phrase that looks naked without an object in the mix” is LETS AT, [Unleashes on]. There are two levels of object missing from the clue! You unleash something on someone. I continue to rail against (over)use of verb + at/in entries. Who’s with me? 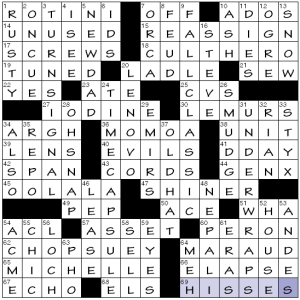 And I suppose that since the DOWN element is affixed to the ‘tops’ of these vertical entries, that can be interpreted as the ‘upside’.

Good morning, friends! I always struggle with Patrick Berry’s puzzles, and this was no exception!! Here I got stuck on the Spanish island crossing a figure skater I had never heard of. To me, that island is called “Mallorca” and I did not really know there was an anglicized version of the name, so MaYorca felt like a fair guess. It is a nono to cross two proper nouns ambiguously, which I would expect Patrick Berry to know, but maybe the New Yorker is more lax about that sort of thing. (I write the puzzles for Vulture and they encourage it…) 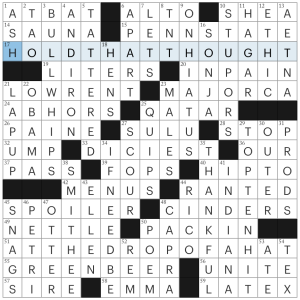 I have also never heard of the word ANDIRON, and I don’t really get why LOW RENT describes a cheap imitation…. to me that describes a great but mythical apartment in NYC. So that crossing also tripped me up.

A Patrick Berry puzzle is also likely to include people I’ve never heard of. Here, we’ve got the aforementioned figure skater, as well as the colonial Thomas PAINE (although once I filled it in, I realize I recognize his name from a Hamilton lyric), Alan SMITHEE (a pseudonym?) and Frank CAPRA.

What were y’all’s thoughts on GREEN BEER? I do not think this is a real phrase and rolled my eyes aggressively when I finally figured out the letters. 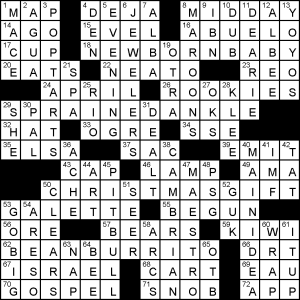 Hoang-Kim Vu & Jessica Zetzman’s theme idea is a fun list: WRAP/ITUP is the revealer, and four wrapped things are found in the long across answers:

Some unusual short and medium answers were to be found in today’s puzzle:

Faster solve today with a fun theme and title hint with excellent fill! 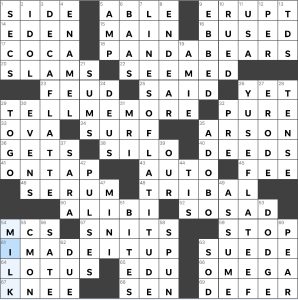 Theme: each themer contains —FLAT— which is in the downs (and so “falling”)

For not too much of a buzz but to still enjoy a hot beverage, order a DECALFLATTE. LINESOFLATITUDE filled in fairly easily, though it took me a moment since it’s been a while since I’ve thought about the full phrase. YUSEFLATEEF is a musician that I recognize by sight though not name but now I’ll remember him by both.

Stumpers: SATE (took me a couple of crossings since I usually hear it used in the form of “satiated”), SLAMS (cluing didn’t do it alone for me, as I equate it more with “dissing” instead of “criticizing”—similar but different enough for me), and ASSUME (needed crossings, as I was thinking more along the lines of “factual” and “proven”)

Lots of fun throughout today’s puzzle, including SILO cluing made me smile with its apt yet unique description. Plus, I enjoyed the fill overall and the grid design. Much to love!