Theme: BLACK CATS (38a, [Unlucky symbols, four of which can be found in this puzzle]). Four entries are clued as words that contain the letters CAT, yet those CATs are disguised as black squares in the grid. Note that each part of each entry is a valid crossword word, even though the first halves aren’t clued separately. 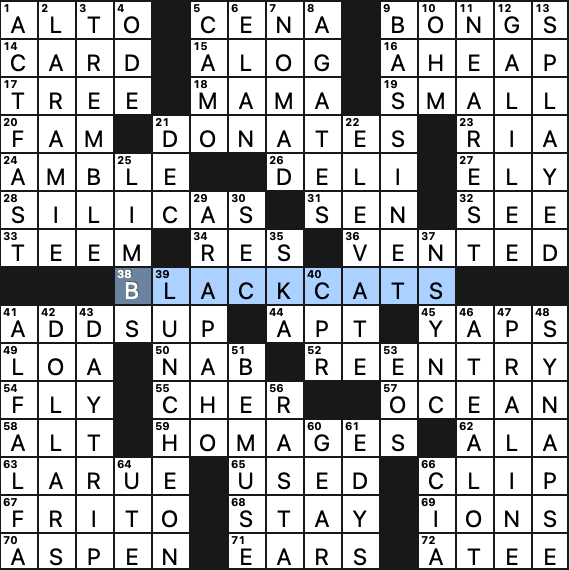 Nice! I caught on almost right away and knew what to look for by the time I got to the second theme answer. The revealer then gave me the verification I was expecting.

I’m not sure I’m sold on the title though. Obviously it’s a bad omen to have a black cat cross one’s path, but I’m not sure how that translates into the title. 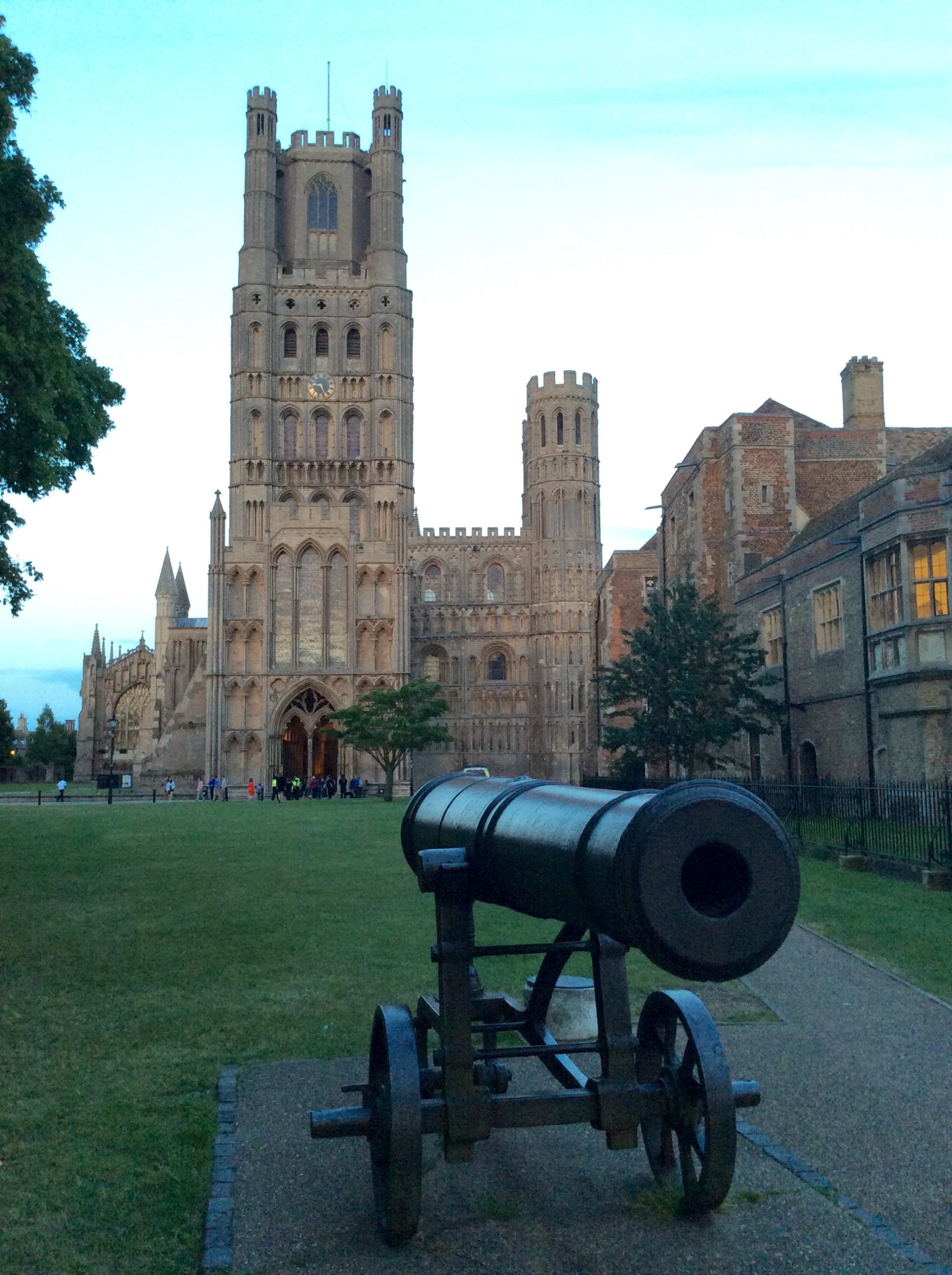 There’s quite a lot of nice long-ish fill, especially in those big corners (though nothing longer than seven letters). Highlights include “ACT FAST!,” GALILEE, ALFALFA, DAY TRIP, PRALINE, BASSINET, ARAPAHO, and LUNCHEON.

Clue of note: 27a [English cathedral city] ELY. Most of you only know ELY from crosswords, but you won’t catch me complaining about it since I’ve visited the cathedral multiple times and my daughter even had her high school graduation ceremony there. Beautiful church! 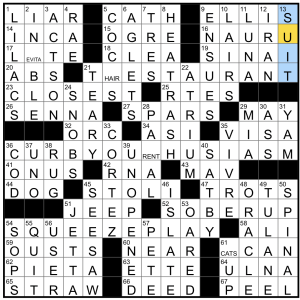 This was my slowest Thursday in recent memory.  I caught the rebus quickly, but couldn’t figure out what exactly I needed to SQUEEZE — synonyms for PLAY, maybe?  But then CURB YOUR ENTHUSIASM yielded Rent, and I was on the move.  Unfortunately, my momentum didn’t last long.  I proceeded to sit in the NW corner for the better part of five minutes, with Evita proving to be an inscrutable rebus inside of LEVITATE and INEVITABLE.  The NE corner wasn’t much better; couldn’t remember Bret Easton ELLIS (and also, he is always, always, always referred to by his full name), wanted SINAI to be the crossword staple ARARAT, and just had no clue about NAURU.

Cracking: SQUEEZE PLAY — revealer aside, it’s a great entry, along with the related SAFETY SQUEEZE and SUICIDE SQUEEZE.

Slacking: CATSUP — I reject the validity of this spelling.  It sounds like a casual greeting between tabbies.

Sidetracking: LILACS — my grandfather’s essay of the same name was published in March of 1966, chronicling his flight from Russia as a child.  Sadly, it rings true now more than ever:

And I thought to myself: How is it possible, in Russia, a land celebrated for its dreamers of liberty – Pushkin, Lermontov, Gogol, Turgenev, Dostoyevsky, Tolstoy – that such a terrible enslavement should exist? How is it possible that in the birthplace of Moussorgsky and Tchaikovsky, where once strummed the plaintive balalaika, now whined unceasingly the shrill bullets; where once gaily tiptoed the lovely ballerina, now grimly trod the heavy boot of the Red conqueror?

Theme: The word EARTH travels from the left side of the grid to the right as the theme answers progress. 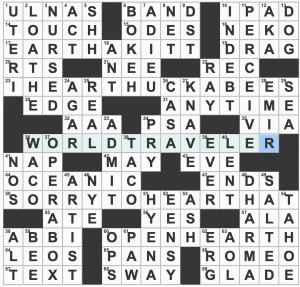 When I was first solving the puzzle, I thought “oh, each theme answer has EARTH in it, that’s kind of cool”. I was very impressed when I saw the second layer of the puzzle and how the “earth” literally moves. Enrique laid out the puzzle so that the first and last “earth”s are at the two sides of the puzzle, which is elegant. Also elegant is that the earth is split between words in the longer theme answers, and fully embedded in a word in the first and last ones (since it would be impossible to split it between words there). EARTHA KITT is my favorite answer, as an “Emperor’s New Groove” fan.

Quick takes on the rest of the puzzle:

Theme: Each theme answer inserts SKI (the gliders of hte puzzle’s title) into a common phrase. 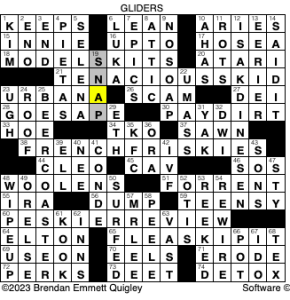 Five themers packed this puzzle with content, and the clues did a nice job helping us make a jump to these creative phrases. I got MODEL SKITS first and then TENACIOUS SKID fell into place once I parsed out the mechanism better. FRENCH FRISKIES made me laugh, as did PESKIER REVIEW.

I felt like this was an easier BEQ puzzle for me, moving in a rotation between Across and Down clues. I guessed KIM for 1d [“Jimmy’s girlfriend on ‘Better Call Saul’”] and needed the crosses to get INNIE since I don’t have Apple TV to watch 15a [“The ‘work life’ persona of a Lumon industries employee in ‘Severance’”]. Shout out to Top Chef’s latest season in Houston for making me familiar with 5d [“‘The Queen of Tejano Music’”] SELENA. Other particular challenges came in the form of NO SOAP (9d [“Just forget it”]) and 57d [“‘Call ___’ (1992 Television single)”] MR. LEE. 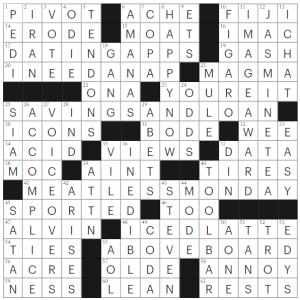 Robyn has crafted yet another satiny-smooth grid accompanied by easy clues.

For those of you stumped by 45d. [Whom Lil Nas X gives a lap dance, in the music video for “Montero (Call Me by Your Name)”], you can watch the video and gain some contemporary cred: 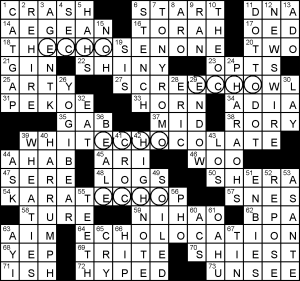 Chandi Deitmer & Darby Ratliff give us a fairly typical LAT theme type – hidden letters. The revealer is ECHOLOCATION, and each of four answers have ECHO across two of their parts:

The puzzle felt like it had quite a few unique / interesting answers:

all of which more than offset the appearance of [Drought-damaged], SERE!

Enjoyed today’s bonus fill in particular but got misdirected by the title for the theme. 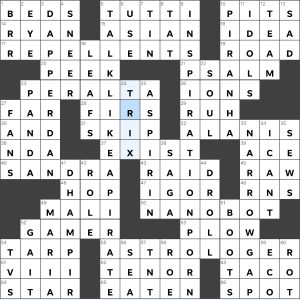 Theme: each themer contains RIP going up since they are in the downs

September 19 is International TALKLIKEAPIRATE Day. INSPIRATIONPORN was new to me but Forbes has an article explaining it and its term coined by Stella Young. Every time I think about a PIRANHA, the image that comes to mind is a toothy ravenous version drawn in cartoons. My favorite DHAMPIR is Fen (portrayed by Tanya DePass) in the Dungeons and Dragons actual play show The Black Dice Society that is available to watch on YouTube. Today’s theme stumped me but thanks to Sally’s blog for the explanation—I got misdirected by the title, reading it as “tears” as in “cries” instead of “tears” as in “rips up” so I kept looking for words related to crying and given the lengthy bonus fill, was unsure of the themer set for a bit.

Stumpers: PEEK (“glance” and “glimpse” can to mind first), PERALTA (new to me, needed crossings), and TRIX (couldn’t think of it)

Overall, a fun puzzle with lots of great fill! Creative theme, especially paired with the potential misdirection in the title that certainly got me today. How’d you all do?

I figured this had something to do with ears from the title, and the revealer confirmed that. I still couldn’t for the life of me figure it out and since it’s already late, I consulted Peter’s explanation.

The revealer starts at 6d [With 29- and 45-Down, heard but ignored…and a hint to this puzzle’s theme]: IN ONE EAR/AND OUT/THE OTHER. And indeed that’s what happens. Two of the black squares stand for EAR and four answers go in one of those squares and come out the other, on the other side of the puzzle. Here’s Peter’s grid.

It’s very clever and remarkably tight, with each EAR square providing E to two clues and AR to the other two. I might have figured it out if I hadn’t been so convinced that 1od was FALSE IMPRISONMENT. And if I hadn’t waited until after dinner and drinks to solve it.