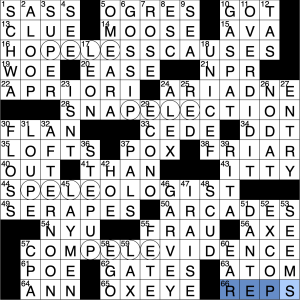 hello and welcome to episode #762 of matt gaffney’s weekly crossword contest, “Pitch Perfect”. i’m happy to be back blogging this week; many thanks to matt for filling in for me last week when i forgot! it’s week 1 of january, so i solved it without the instructions, and it was straightforward enough. what are the theme answers?

each of these words or phrases contains a hidden PELE, honoring the late brazilian soccer (futebol, if you prefer) great who passed away the week before this puzzle came out. pele had been in the news throughout the recent men’s world cup not only because he was rumored to be in failing health but also because lionel messi erased perhaps the only remaining demerit to his own case to overtake pele as the GOAT by leading argentina to a world cup championship through a series of spectacular performances.

one of the podcasts i enjoyed quite a bit in 2022 was 22 goals by brian phillips of the ringer, a history of the (men’s) world cup told through 22 significant goals throughout the tournament’s history. two of the episodes focused on pele (one more than the other): one on his involvement in the final goal of brazil’s 4-1 victory over italy in the 1970 final, pele’s last world cup game, and another on the 17-year old pele’s resplendent arrival on the world scene in the 1958 world cup, including two goals in the final over sweden, the first of which was unlike anything i’ve ever seen.

this felt like a quintessential week 1 puzzle: totally beginner-friendly but still interesting and fun and a timely tribute to one of the great historic figures of the 20th century. here’s to another great year of MGWCC puzzles! and if you’ll be at MIT for mystery hunt this weekend, come say hello!