Theme: Greek letters have been added to certain words thus making new words and phrases, although the clues are for the un-Greeked words. The revealer is GONE GREEK (62a, [Joined a frat, and a hint to the puzzle’s theme]). 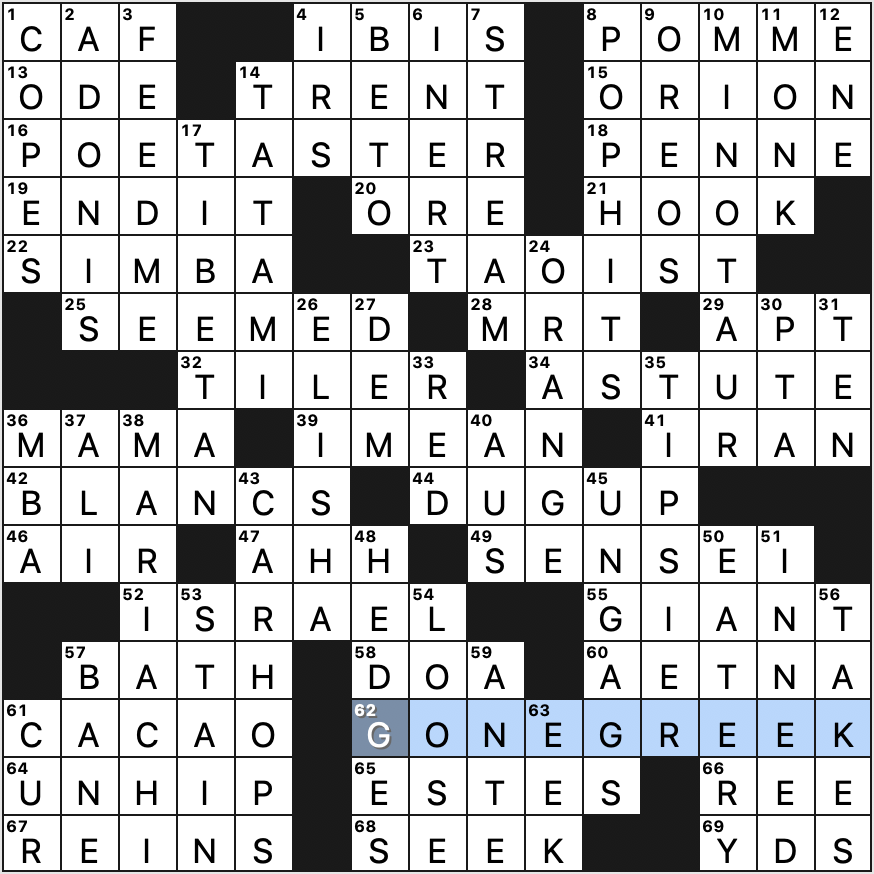 Nice theme with a few surprising twists. Getting the gist of the theme in that NW corner definitely helped with resolving some of the others.

Eight theme answers is a lot, so there isn’t much to speak of in the long fill department. But ADONIS and ORION make for nice theme-adjacent entries, and I like the international feel with IRAN, BLANCS, ISRAEL, TAOIST, and SENSEI to name a few. 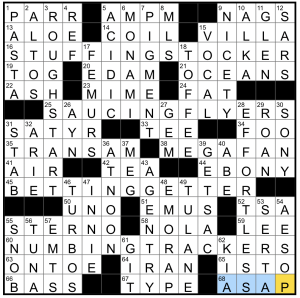 This is what some people might derisively call an “old fashioned” theme, which means it’s somewhere in the vicinity of my wheelhouse.  I think all of these land pretty well, with my only real point of contention being that singular and plural theme entries are mixed for the purposes of grid symmetry alone; that always comes off as inelegant, but sometimes you can’t avoid it.  I’ve certainly been guilty of the same.  I wonder if it could have been expanded to a 21x, obviating the need for the arbitrary plurals.  There are certainly endless options (LISTING MAIL — Packages askew?, RAMMING BATTER — Pounding the dough?, etc.)

Cracking: ROUGH START — I did not get off to one, for once.

Slacking: AGENTRY — if AGENTRY means the “actions of an agent”, does that make CARPENTRY the actions of a carpent?

Sidetracking: MEGAFAN — it’s so close to MEGAFAUNA.  Speaking of which, did you know that the oldest living tree in the world — a Great Basin Bristlecone Pine named Methuselah — was already a thousand years old when the last woolly mammoths died off in Siberia?

I had a little trouble with the NW corner of this puzzle because I wasn’t thinking clearly, which made the theme harder to pick up. For a while I thought there was some wordplay or other weirdness. There was not. I wish there had been.

The theme answers are the seven longest answers in the puzzle. I know that because the revealer told me. On the surface, there’s nothing connecting them. 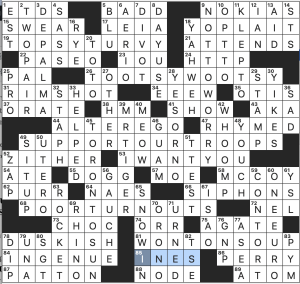 What do these things have in common? I had no idea (and didn’t realize some of them were theme answers). Luckily there’s a revealer at 89a [Small matter (and when read as three words the letters that aren’t in the seven longest answers in this puzzle)] is ATOM or A TO M. The first half of the alphabet is missing from these answers as the title suggest. Um, OK. This is one of those feat of construction puzzles which was not a whole lot of fun to solve. I far prefer last week’s trickery to this tedium.

What I didn’t know before I did this puzzle: never heard of INES Di Santo. I haven’t been in the market for a wedding dress in nearly 40 years. I have to say that hers are gorgeous.

Awesome puzzle with a fun theme and themer set plus an amazing bonus fill triple stack too! 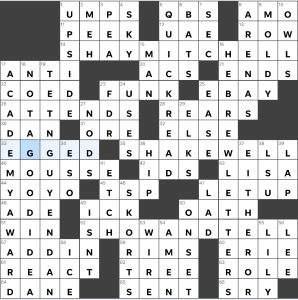 Theme: each themer is enclosed in SH—ELL

SHAYMITCHELL stars in an animated fantasy horror series based on a namesake graphic novel that sounds excellent (and needs to be added to my “to-watch” list). SHAKEWELL had fun cluing and it filled in right away for me. However, SHOWANDTELL took me a few crossings since drawing and art class were my first thought, as I know of the comic but missed out on it growing up. I found a couple of stellar examples in which Calvin sasses his class and also pulls the ultimate rebellion by refusing to follow the instructions.

Plus, bonus fun: EGGED lines up with the second themer and ties into the theme nicely since an egg has an outer shell but it’s broken or split when cracked, or in this case thrown at something or someone.

Take a look at this grid! Solving in the app, the most noticeable is the starting black space and then my eyes drifted to the eastern side of it, with all the rest of the space. But the most impressive is the western edge with the lengthy triple stack (is it still a “stack”, which sounds better, or is it now “columns” since it’s vertical?) that holds everything together. I love this gorgeous, quirky grid! 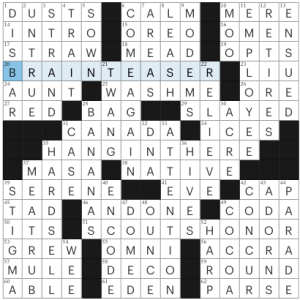 Quick and breezy! Caitlin—like our other Thursday New Yorker regulars, Robyn Weintraub and Patrick Berry—knows how to make easy puzzles as well as zippy themeless grids.

The rest of the short and mid-range fill is good, super-smooth and free of crud. Exactly what you want in a puzzle that’s pitched to be easy.

New to me: [Additional free throw, in basketball lingo], AND ONE. Makes sense. Never even saw the clue while solving, since the crossings were zip-zip-zip to the finish.

4.5 stars from me, for a light jaunt through themelessland.

Theme: Puns about ingredients in soups. 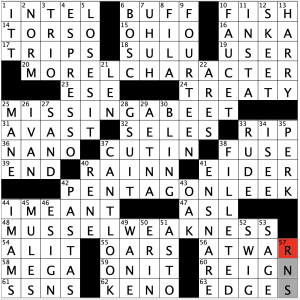 Food puns are a tried and true theme type, but these were pretty funny if a bit random – “soup ingredients” encompasses a pretty wide array of things, after all. Two of the theme answers, MISSING A BEET and MUSSEL WEAKNESS, are about soup flaws, so it could have been funny (and perhaps a tighter theme) if all the answers were about that. My favorite answer was MOREL CHARACTER, while PENTAGON LEEK felt weaker to me both in terms of the base phrase and how convoluted the clue needed to be.

Generally, the fill is very smooth – I could *maybe* see the SELES/AETNA/RAINN area tripping people up, but I personally knew them all, and I think it’s a fair enough crossing. Notable fill included ESPRESSO, CAN’T LOOK, and FOURTEEN (although that one was clued with the impressively boring [Half of twenty-eight]. There’s also a lot of British royal content here, between Meghan and HARRY and the REIGN of King Charles III. I guess this puzzle is really excited to read “Spare”, huh?

Clue I disagreed with: that FILA is a converse competitor. Idk man, Filas are known for being chunky and Converse are… not. I really thought this was gonna be “Vans”. They’re both shoe brands, but minimally comparable ones in my opinion. 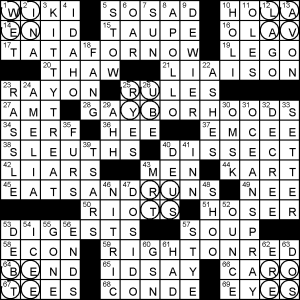 Quick because our fourth two hour period of rotational power cuts for today is about to start: there are six four letter “___ RED” colours, with the revealing answer – RIGHTONRED. That’s turning right into traffic here… Five of the six reds seem pretty common from over here: WINE, RUBY, RUST, BEET and ROSE. LAVA red is news to me though…