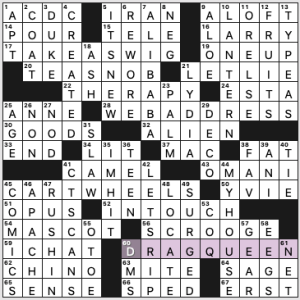 Jenni’s otherwise occupied, so I’m stepping in with a quick write-up before the NYT puzzle comes out. This one is indeed, as billed, “lightly challenging.” The theme revealer is 60a. [Gender-bending performer who wears articles that can be found at the ends of the answers to the starred clues], DRAG QUEEN, and the title is borne out by parts of a queen’s “outfit” appearing at the “right” side of the starred answers:

Elegant that the themers go from head to toe, top to bottom in the grid. Also? Seeing CARTWHEELS just makes me happy. I’d probably break myself if I tried to turn cartwheels now.

Didn’t realize TEA SNOB was a thing, but surely there is a snob for everything. Didn’t recall 44d. [2015 Flo Rida song that makes a great anthem for a party host], “MY HOUSE,” but the clue makes the title inferrable.

I could see solvers who don’t follow RuPaul’s Drag Race, current jewelry brands, and Flo Rida’s oeuvre getting mired in the center right, but that’s on those solvers. I’m delighted to see wildly unique drag queen YVIE Oddly ([Performer and self-proclaimed “queerdo” ___ Oddly]) in the puzzle. Watch some of her RPDR highlights in the video—your mind will boggle at the artistry. 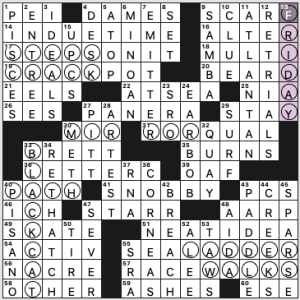 Well, it’s Friday the 13th this week, so instead of our customary themeless Fri NYT, we’ve got a holiday theme with lots of circled/shaded letters. Bring on the superstitions!

We do still come in at the 72-word mark, so it qualifies for Fri/Sat themeless status. In that vein—Fave fill: IN DUE TIME, STEPS ON IT, CRACKPOT, BLACK CAT, and the oddball RORQUAL ([Streamlined type of baleen whale]).

Theme answers are familiar words and phrases comprised of a fish and another word found elsewhere in the grid. 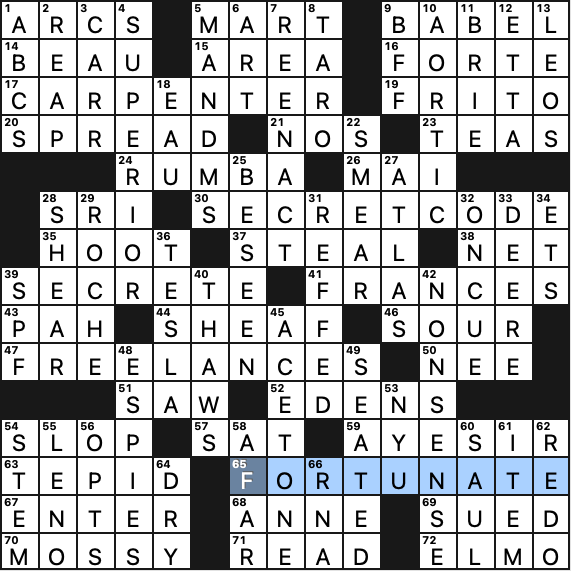 I think I can safely say that there’s nothing I like less in crosswords than having to count squares. I’m not even sure why it’s necessary in this case. Even if you don’t have circles, I think the solver can figure out that the theme answers are fish + another word in the grid.

Another thing is that I’m not even sure how to interpret the clues. In the game of Go Fish, a player asks their opponent if they have a certain card, and if they do, the opponent is obliged to give the card to the player. If not, the player has to go to the fish pond (or whatever you might call it) and draw a random card, hoping to get the card they asked for.

Given that the words “Go fish” are in each clue, I was trying to apply that mechanism to the puzzle without any success. But now, post-solve, let me try again. Maybe the clues are saying, “Here’s where your fish is at (identified by the letter counts), and go elsewhere for the rest of the letters.” I guess? That’s as close as I can get although in the card game, you’re never so lucky as to get everything you want from the fish pond all in one go.

At best, I found the cluing confusing, which is a shame, because I love the creativity here. But all that mattered during the solve was that I surmised I could combine the referenced entry with a fish to make the new entry.

The four theme answers plus the four extra words use up a good bit of grid real estate, but at least we get a couple longer juicier words in the fill (SUPERIOR and NONSENSE). BE SEEN [Attract attention] feels a bit like a long partial extracted from either one of two idioms (“see and be seen” or “children should be seen and not heard”).

Clues fell on the straightforward side, and I feel I’ve gone on long enough. Nice puzzle and I enjoyed the creative effort, but the theme didn’t quite correspond to the card game. 3.5 stars. 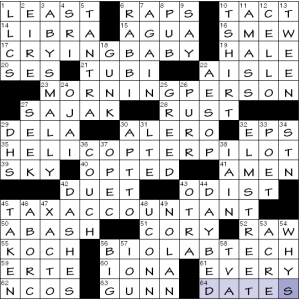 In the thematic clues, ‘one’ as a noun (usually capitalized) is reinterpreted as a third person singular pronoun.

The relationship of that last clue is a bit looser than the rest. It’s a rather dry theme. 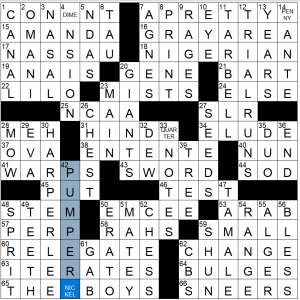 Rebuses! A revealer at 59a and 62a [… a trifling amount … and what’s found in four places in this puzzle] SMALL CHANGE points us to four rebus squares each containing a coin:

It’s kind of rare to see so many letters in a rebus, and as such, only the DIME entries masked the rebus word within the longer entry for me — compare to how EVITA and HAIR worked into last Thursday’s (1/5/23) New York Times puzzle — but that’s not an issue other than my preference for difficulty. I have a suspicion grid construction was harder than it looks here; it would be tough to fit SMALL CHANGE as a single, 11-letter revealer, maintain symmetry, and still have four spots that could accommodate rebus entries for each of the most prominent US coins in circulation.

Theme: Each theme answer contains something that you might order at a restaurant. 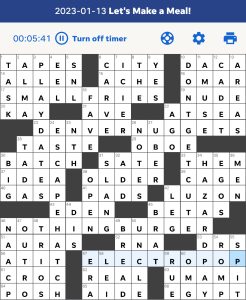 I was really excited when I saw the title of this puzzle, but honestly, it’s even better than I expected (and is really tempting me to get a burger and fries for dinner tonight). SMALL FRIES was cute, and it’s a nice enough differentiation from what you might actually order – a SMALL FRY – that it fits in with the other entries, all of which do not explicitly reference a food item. I needed help with both DENVER NUGGETS and ELECTRO-POP but both came through on the crosses pretty smoothly.

DON’T GET CUTE and ESCAPE HATCH both lead me astray. I first tried to enter DON’T TALK BACK, but obviously it was too long. Likewise, I had ESCAPE PODS and then, seeing it was too short, ESCAPE BOATS before AURAS, CROC and POSH made HATCH the logical fill here. I realy enjoyed the cluing on 6d [“Cut like a Thanksgiving turkey”] CARVE because it feels weird to me that we have a separate word for cutting large proteins. I also really liked 49d [“Restaurant freebie in a basket”] BREAD since it felt like an appropriate appetizer for the meal we’re making by filling in the grid. Finally, it’s been a looooong time since I’ve heard 38a [“Longer in the tooth”] for OLDER.

Overall, I really enjoyed this puzzle!