Note: A change is coming to the editorship of the Universal Sunday 21x puzzle. See Jim’s post below for more details.

Happy weekend! I hope you’re well and, if you’re lucky enough to have a long weekend, enjoying the extra bit of time off. Let’s jump into this puzzle, which is the second ‘theme entry with a sub-theme entry in circles’ puzzle we’ve had recently: 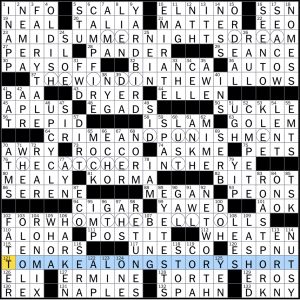 – 23A: A MIDSUMMER NIGHT’S DREAM [Play about love and heartbreak in Ancient Greece [1605, 431 B.C.]] with MEDEA spelled out in circled letters

– 37A: THE WIND IN THE WILLOWS [Timeless children’s classic about country dwellers’ friendships [1908, 1881]] with HEIDI spelled out in circled letters

– 64A: CRIME AND PUNISHMENT [Magnum opus about a man, family and the concept of free will [1866, 1965]] with DUNE spelled out in circled letters

– 76A: THE CATCHER IN THE RYE [Coming-of-age novel about a teenage boy and his isolation [1951, 1986]] with HATCHET spelled out in circled letters

– 102A: FOR WHOM THE BELL TOLLS [Tale about soldiers and treachery in southern Europe [1940, 1603]] with OTHELLO spelled out in circled letters

I will admit that I had to check out the review on xwordinfo to figure out the theme / how the pairs of books related to each other here. According to that review, each theme entry and its corresponding circled letters theme entry can both be described by the same synopsis clue. I guess the idea of common synopses is interesting, but many of the sub-theme entries weren’t long enough for me to make for a compelling “transformation,” so to speak.

The literature in the theme entries seemed to come from a relatively narrow set of “classics” often taught in intro English classes… but that aren’t quite representative of many readers. It would have been nice to see a broader diversity of authors / characters in a modern puzzle. I also didn’t get how the revealer worked; as xwordinfo mentioned, it seemed that this would have worked better as a revealer for a puzzle where a work was boiled down to one of its fundamental themes. For this puzzle, the themer might have been something instead along the lines of TWO-FOR-ONE or the like. 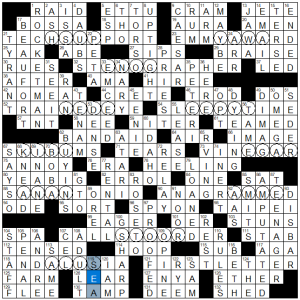 Breezy Sunday from Evan this holiday weekend — I think I’ve only been sub-4 once before on a 21x — helped by an easy-to-grok theme, super in-the-language themers, and a bunch of them, at that.

Our title is “Backstories,” and each of 11 themers contain a book title in reverse:

The revealer adds an Easter egg for us: 121a [Important part of each reversed book title in this puzzle (which you can use to spell out an apt phrase)]. That phrase is PAGE TURNER, apt not only for a book-centric theme, but for this particular grid, where books (and their “pages”) are “turned.” Sometimes I call these extra flourishes out as necessary to provide more constraint to an otherwise flexible theme. I don’t think that’s the case today — there’s *11* books already. That they’re in a relevant order, and hidden in such common entries, is lovely.

Oy. Talk about some bizarre timing. A puzzle titled “Farewell Tour” referring to Elvis Presley when his only daughter suddenly passed away a few days ago? Obviously the puzzle is scheduled well in advance and the theme has nothing to do with Lisa Marie Presley, but still, it’s unfortunately timed.

The 3-part revealer starts at 60a with the clue [With 69- and 75-Across, announcement after a Presley concert … and a hint to the word removed to form each starred clue’s answer]: ELVIS HAS / LEFT THE / BUILDING.

The word removed from the other theme answers turns out to be “king”. 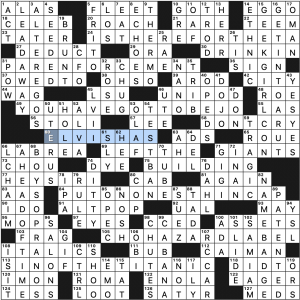 These were okay. Nothing really slayed me here and some of them felt overly forced. I love the revealer and I don’t mind the concept behind the theme, but maybe the timing has negatively influenced my feelings toward it.

The long fill is quite nice especially GEEK GIRL CON, BOY SOPRANOS, AHEAD OF TIME, ALTER EGOS, NAME BADGE, TEST BAN, GET INTO A RUT, “DON’T CRY,” and “HEY SIRI.”

Clues are mostly the standard affair as Universal puzzle clues are apt to be, but there are a couple standouts like [Try to stay safe?] for SLIDE and [Returns from the Grand Canyon?] for ECHOES.

In other news, it was announced this weekend that Jeff Chen will be taking over editing duties for the Universal Sunday 21x puzzle in March as David Steinberg takes on some additional responsibilities at Universal. Per Mr. Steinberg, “As of today, all Universal Sunday Crossword correspondence should be directed to Jeff’s new email address:  universalsundaycrosswords@gmail.com.  Please join me in welcoming Jeff by sending him lots of 21×21 queries and submissions!  The first puzzle under his editorship will run March 5.”

And per Jeff, “Theme queries are very welcome (preferred over finished grids), and although we have to focus on a solving base that expects simpler concepts, I want fresh, interesting ideas from both new and established constructors, from all backgrounds.

“I’d also love GRID ART that helps a crossword pop off the printed page. Toward both of these goals, I’ve created some grids that I hope inspire constructors, especially new ones of underrepresented backgrounds. Maybe one or more images will spur your imagination, and you’ll come up with a theme set to do it proud.

“And if you don’t have the ability to make a 21×21 crossword all by yourself yet, I’m happy to work with you to split theme development, gridwork, and cluing, using a shared byline (your name first, mine second).”

Here is a link to some of the sample (empty) grids Jeff created to get an idea of what he means by “grid art.” They look pretty fun, so if you’re an aspiring Sunday constructor, have a look and maybe it’ll give you some inspiration. 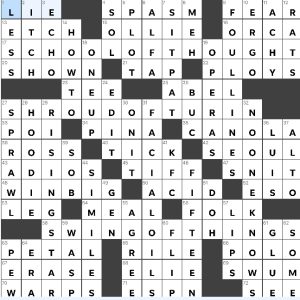 I really liked these theme answers, finding each to be pretty fun and fresh. I’d be curious to see how other folks found the SHROUD OF TURIN. Once I had SHROUD on the crosses, it was easy to get the rest (and by then, I knew an OF would appear in the answer as well). SWING OF THINGS was undoubtedly my favourite here, but I also quite liked SCHOOL OF THOUGHT. On the other hand, I wasn’t necessarily as sure about the repeated use of OF in each one, personally.

The beginning of this puzzle felt rather devious, seeing LIE, PLOT, and PLOYS in the topmost section. I also enjoyed the inclusion of 9d [“Markings that extend from home plate”] FOUL LINES and 29d [“Up-and-comer”] RISING STAR. It was also fun to see 36d [“‘Despacito’ singer”] FONSI next to ALTO and homophones SOME crossing SWUM.

Overall, I had fun with this puzzle!