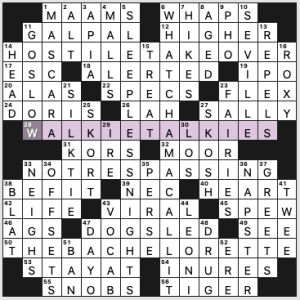 Ah, here’s the regular Friday puzzle, no theme and easier than you’d expect for a Saturday. I’m digging the grid—sort of a dogwood blossom with a structure of 13s and 15s supporting it.

Re: DOGSLED – My old roommate and her family went on a dogsledding/camping trip in Northern Minnesota this month. Would you believe the sleeping accommodations were sleeping bags out on a snow-covered lake, under the stars, no shelter, in -15°F temps? This … is not for me. 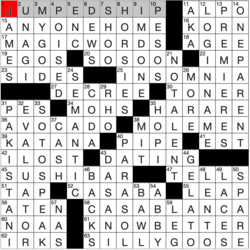 It looks like this one’s a debut! To debut with a themeless is most unusual, and pretty impressive. This one was a bit harder than has been the case with the last few LAT Saturdays, which I appreciate. The top half of the puzzle, at least for me, was notably harder than the bottom half. So, to quote the Drake song, started from the bottom, now we’re here.

I wasn’t crazy about the entries MOLE MEN (especially now that I’ve looked that up and see that the term has been applied to homeless people) or NO TALENT and KNOW BETTER, which both feel like incomplete thoughts. (When NO-TALENT(ed) is paired with ASSCLOWN, however, I’m all for it.) 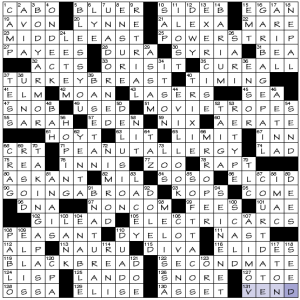 This is a fine theme consisting of some really great finds. The idea is two-word phrases in which the second word can be anagrammed to yield another recognizable two-word phrase. The clue points to the unseen version.

On that cheerful note. 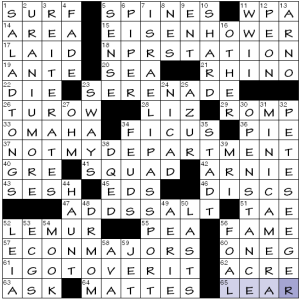 Three phases of solving on this one. First, a few entries right away, practically gimmes. Second, steadfastly working the grid to complete the broad swath from upper right down to lower left. Third, impasse for the narrower upper left and lower right sections, but eventual breakthroughs in each, leading to ta-da.

In general, it was characterized by typical Stumperish cluing, the type that ratchets up the obfuscation because it can.

Anyway, time for the tour.

Overall, not too tough as far as Stumpers go, but still a welcome workout.

Will Nediger’s USA Today crossword, “Malcolm in the Middle”—Matthew’s recap 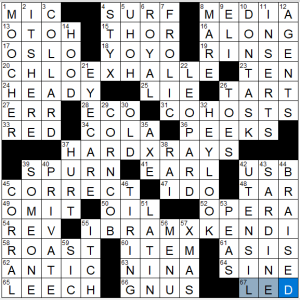 Will Nediger’s USA Today crossword solution, “Malcolm in the Middle,” 1/14/23

Our themers all have a centered -X- – the “Malcolm in the Middle” is Malcolm X rather than Frankie Muniz:

I’m a big fan of Kendi’s, didn’t know Chloe x Halle before today, and got suckered into putting “gamma” RAYS before recognizing the theme. So a nice little aha moment once it clicked.